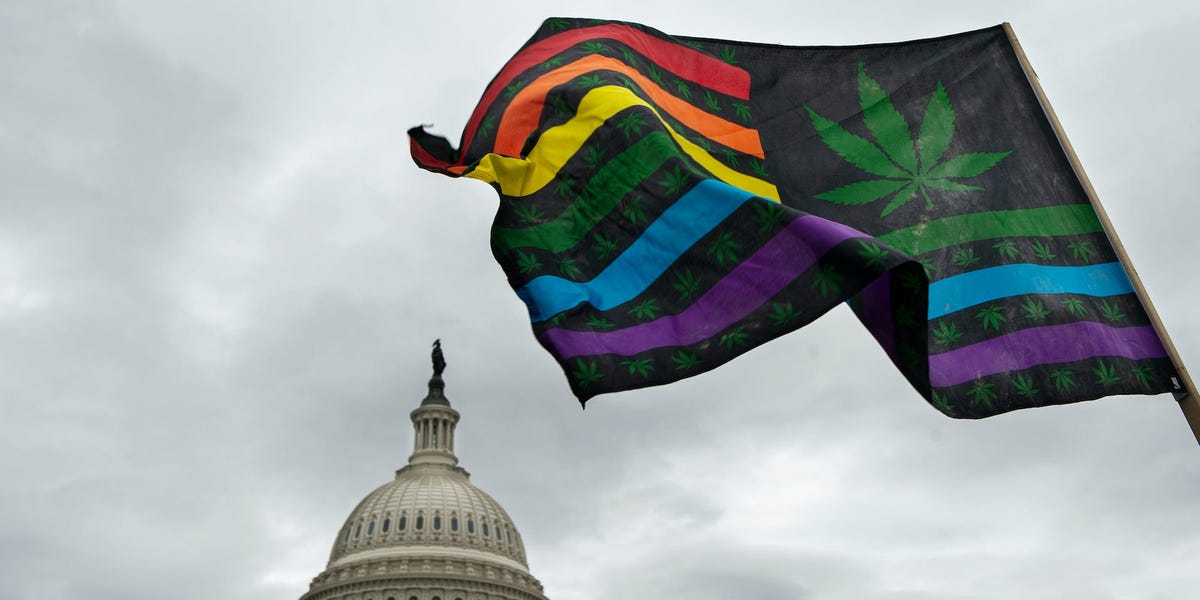 Marijuana legalization is no longer a single-party issue on Capitol Hill.

Rep. Nancy Mace, a South Carolina Republican who took office earlier this year, has written a preliminary version of a compromise to a federal legalization bill that’s not quite as far-reaching as Senate Majority Leader Chuck Schumer’s Cannabis Administration and Opportunity Act.

A leaked version of the bill was first reported by the industry publication Marijuana Moment on Friday.

While Democrats — led by Schumer and Sens. Cory Booker and Ron Wyden — have so far guided the push for federal legalization, a top Wall Street analyst called Mace’s bill a “compromise” that could significantly increase the probability of federal cannabis reform this congressional term.

“Yes, a lot has to happen for this to be the real deal, but it makes sense to be constructive,” the Cantor Fitzgerald analyst Pablo Zuanic wrote in a Friday note. Zuanic added that the bill would also allow US cannabis stocks to uplist from secondary exchanges like the Canadian Securities Exchange to the New York Stock Exchange, Nasdaq, or TSX, where they could access deeper-pocketed institutional investors.

Cannabis is considered a federally controlled substance by the federal government though a number of states have legalized it for both medical and recreational use.

Zuanic said that there is plenty of room for Democrats and Republicans to come to an agreement if a final legalization bill includes some of the social-equity provisions laid out in Schumer’s Cannabis Administration and Opportunity Act.

Schumer’s bill would remove cannabis from the list of federally controlled substances and kick oversight to the Food and Drug Administration, the Alcohol and Tobacco Tax and Trade Bureau, and the Bureau of Alcohol, Tobacco, Firearms and Explosives. The bill also includes sweeping social-justice-oriented provisions, including record expungement for those convicted under previous cannabis laws, as well as reinvesting tax revenue into communities harmed by the war on drugs.

But Schumer himself said that his bill does not have enough support to clear the 60-vote filibuster threshold in the Senate, given the slim Democratic majority. And, as Insider has reported, it’s not clear whether he could even get all 50 Democrats on board.

House Democrats have also passed a narrower cannabis-reform bill multiple times, the SAFE Banking Act, which would protect banks that choose to work with the cannabis industry but stop short of federal legalization. That bill has garnered Republican support, though it has not yet received a floor vote in the Senate.

Mace’s bill, for its part, would federally deschedule cannabis, expunge records, and levy a 3.75% excise tax on cannabis sales — far less than the escalating tax proposed in Schumer’s bill, which would see cannabis sales tax hit 25% in the fifth year after legalization. It would also leave it up to the states to set their own cannabis policies.

Since it is still a draft, it’s set to substantively change ahead of being formally introduced.

The market has so far reacted positively to Mace’s bill, though it’s still a preliminary draft rather than polished legislation that’s set for a vote. MSOS, an exchange-traded fund that tracks a basket of US cannabis stocks, shot up when news of the bill hit on Friday, and those gains continued into Monday, with the ETF rising close to 10%.

On top of that, industry leaders cheered the bill.

“A new R-led congressional bill could be the common sense solution we’ve been waiting for: Federal de-scheduling, sensible tax & regulation parameters, social justice, safe harbor & hiring provisions! Thanks @RepNancyMace! Let’s work across the aisle & get it done!” Boris Jordan, the chairman of Curaleaf, the largest US cannabis company, tweeted on Monday morning.

But analysts from the investment bank Stifel said in a Monday afternoon note, don’t expect full-scale federal legalization in 2022. Instead, they believe progress on the SAFE Act this congressional term, which ends on January 3, 2023, is more likely.