An unregulated cannabis dispensary is already open for business in New York City, even though the state is still deciding what legal weed sales will look like. Here's what it's like inside. - Read of Green 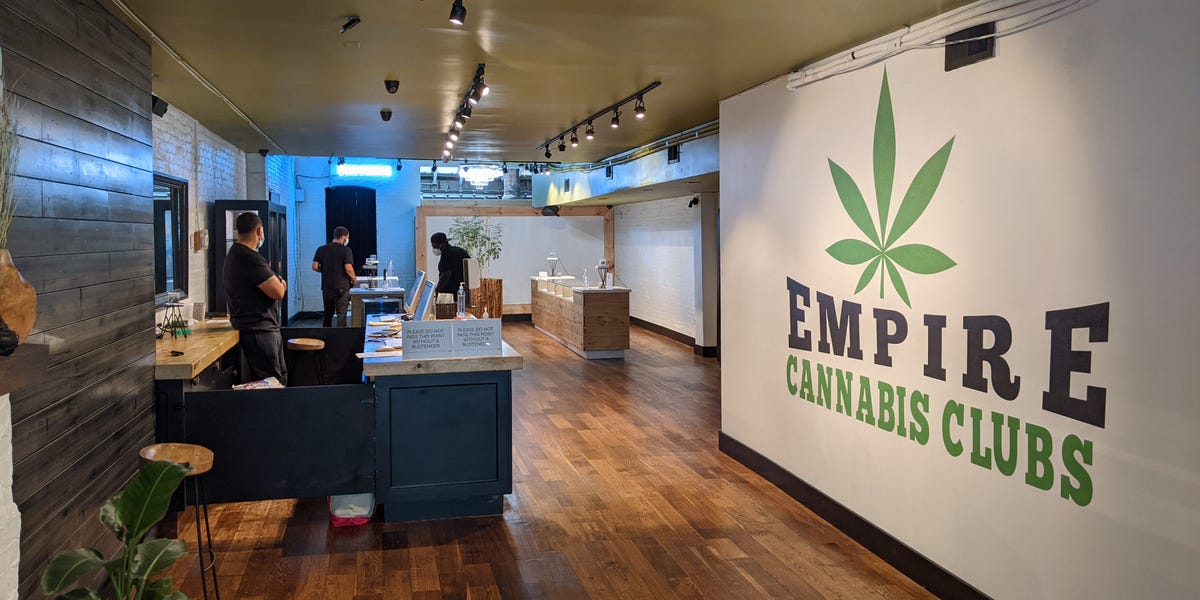 On a beautiful fall afternoon in New York City, one of Empire Cannabis Clubs’ owners stood out front on 8th Avenue and told anyone walking by the good news: “Recreational cannabis inside, folks! 18 and up! No medical card required!”

It was a somewhat brazen act for an already brazen business.

Even though recreational cannabis use was legalized on March 31 in New York State, there’s no fully legal way to purchase cannabis at a dispensary.

That isn’t stopping Empire Cannabis Clubs, which opened its doors in September as a recreational cannabis shop operating in the Big Apple.

A recent visit to the shop confirmed exactly that:

When I first entered the store, a host checked me in near the front door and scanned my driver’s license.

After that, I was ushered past the checkout area into a brief tour of the space.

A display case full of various edibles was first up, with everything from cannabis chocolate bars to THC-infused corn chips available for purchase in a variety of prices. A display case on the opposite wall showcased various vaping options: disposable half-gram cartridges and full-gram refill cartridges with varying prices and packaging.

Finally, we reached the big star of the show: two long display cases filled with little cubes containing a few buds each of what’s known in the dispensary world as “flower,” or more commonly called “weed.”

The gentleman behind the counter was happy to talk through various strains, and even offered to open the containers so I could get a closer sniff.

A card accompanying each strain offered even more details, from how the cannabis was grown to what type of high to expect. I was able to talk through several strains with the employee and ask about pricing.

Customers could get quarter ounces of strains like Gorilla Glue and London Russian Cream for just shy of $100, with a $15 “membership fee” for the day (a $25 monthly pass is also offered).

Technically, Empire Cannabis Clubs says, customers are not buying any cannabis — they’re paying for the “acquisition and transfer” of the cannabis they’re being given as part of the membership. That’s how the company describes the transaction on its website, apparently as an attempt to get around the ban on sales of cannabis by unlicensed sellers.

Everything about the experience of visiting Empire Cannabis Clubs felt like going to any other legal dispensary — despite the fact that it appears to be operating in a kind of legal gray area.

Rather than calling itself a retail store, Empire Cannabis Clubs operates a “membership service in which the club will acquire cannabis products for its members,” according to the dispensary’s website. When you buy cannabis or various cannabis-based products, you’re paying for “the cost to facilitate the acquisition and transfer of said products,” the website says.

The company apparently sees this as a legal loophole in New York’s current limbo between legalization — which was signed into law in March — and the beginning of legal sales, which aren’t expected until late 2022 at the earliest, and more likely in early 2023.

It’s unclear whether that loophole argument would hold up in court, according to Benjamin Goldburd, a lawyer at the New York City firm Goldburd McCone LLP.

“In a situation like this, it’s decriminalized at the patron level,” Goldburd told Insider, meaning customers purchasing small quantities of what a dispensary is selling are unlikely to face criminal charges. “But at the business level? Especially due to the fact that this is now a moneymaking product for New York? I can’t imagine that they’re not going to try and enforce that that licensing is a requirement.”

In plain terms: Because Empire Cannabis Clubs hasn’t gone through the licensing process (which isn’t set up yet), and it’s not being formally taxed for the products it sells (which also hasn’t been set up yet), New York State could have a reason to pursue legal action.

And even though Empire Cannabis Clubs says customers are paying for membership, rather than paying for cannabis, that may not be a strong enough argument to hold up in court, Goldburd said.

Since the state has yet to issue licenses for recreational dispensaries, or to set up how taxation will work, or any other number of policies regarding the newly created adult-use cannabis market, it’s not clear if so-called “clubs” like Empire will face legal action from the city or the state.

One thing is clear: New York State’s Office of Cannabis Management believes any unlicensed sale of cannabis is illegal.

“The unlicensed sale of cannabis remains illegal in New York State and the state will work with its local partners to enforce the law,” a statement from the Office of Cannabis Management communications director Freeman Klopott provided to Insider said. “New York State is building a legal, regulated cannabis market that will ensure products are tested and safe for consumers. We encourage New Yorkers to not partake in illicit sales where products may not be safe, and those attempting to sell illegally must stop immediately. We will continue to work to ensure that New Yorkers have a pathway to sell legally in the new industry as we work to deliver economic justice.”

Empire, meanwhile, has plans to expand to at least two more Manhattan locations in the near future.

Got a tip? Contact Insider senior correspondent Ben Gilbert via email (bgilbert@insider.com), or Twitter DM (@realbengilbert). Use a non-work device to reach out. PR pitches by email only, please.