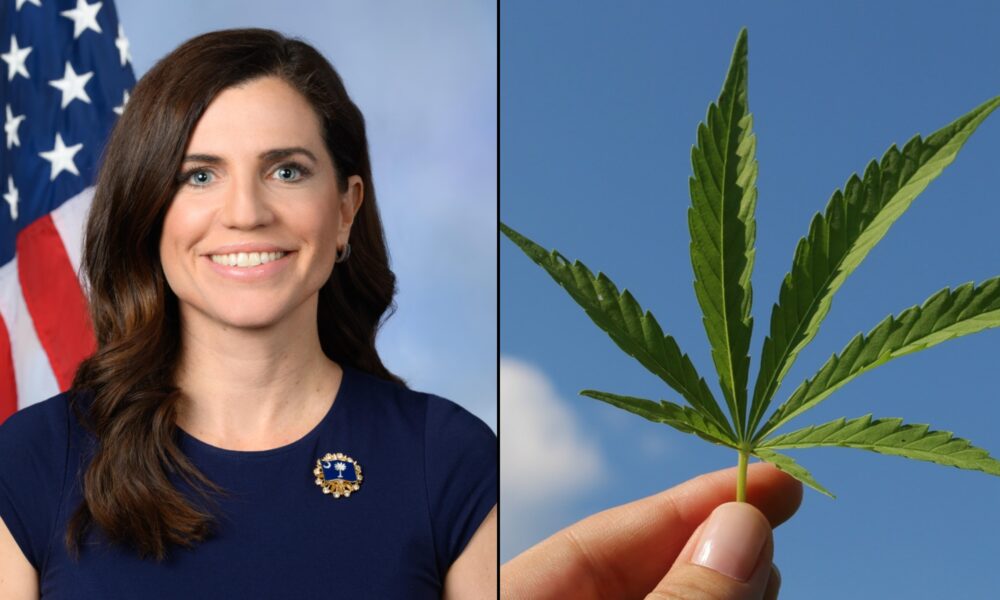 With Republicans expected to take control of the U.S. House of Representatives next session, a GOP congresswoman says there’s an urgent need for bipartisan collaboration on the issue of marijuana so lawmakers can reach consensus on a path forward to end federal prohibition.

Rep. Nancy Mace (R-SC), sponsor of a cannabis legalization bill that she filed earlier this year, told Marijuana Moment in a phone interview on Tuesday that she’s encouraging her Republican colleagues to take lessons from a congressional cannabis hearing take took place earlier in the day and “look at the data” to inform next steps.

“With Republicans in the majority in the House, if Democrats in the Senate want to get it done, both sides of the aisle have to work together so that any concerns that Democrats or Republicans have [are] addressed,” Mace said.

Senate Democrats share that sense of urgency, with Sen. Cory Booker (D-NJ) saying on Sunday that reform can either pass “now” during the lame duck session or possibly “many years from now” with GOP in control of the House in the 118th Congress.

Looking beyond the lame duck, however, Mace recognizes that the political prospects of reform depend in large part on the willingness of incoming Republican leadership in the House to advance the issue, and so while she said she plans to refile her States Reform Act (SRA) to legalize marijuana, the congresswoman says it’s important to consider “the steps we can take incrementally over the next legislative session to move forward.”

“Because the only place that cannabis is controversial is in D.C.,” the congresswoman said.

“I’m encouraging all my Republican colleagues to watch the hearing today. There were very few Republican objections,” she said (even as one GOP member of the panel raised eyebrows by comparing legal cannabis sales to slavery).

“Look at the data that we presented, look at the information, the stories—this is winning for America,” Mace said. “But we have got to work together. Both sides have to reach across the aisle given the makeup of the next legislative term.”

The House has been supportive of legalization under Democratic control, with the chamber voting for the second time in April to pass a comprehensive bill to end prohibition from Judiciary Committee Chairman Jerrold Nadler, the Marijuana Opportunity, Reinvestment and Expungement (MORE) Act.

It’s the Senate that’s proved most challenging in the fight to end prohibition, with even modest bills like one to provide cannabis banking protections that’s cleared the House in some form seven times stalling in the opposite chamber under both Republican and Democratic majorities.

Now, especially with the election outcome, the pressure is on to do something with the remaining weeks of the lame duck session. Senate Majority Leader Chuck Schumer (D-NY) has been working to finalize a package of marijuana reforms that’s expected to include banking and expungement language, and possibly more.

Mace said that she’s “hopeful” that such a package could advance, even during the short window before her party takes control of the House.

“I don’t want us to sit on the sidelines and do nothing next session like we always have,” she said. “We’ve got to modernize our laws, modernize our regulations. We need to make sure that we’re not funding the cartels by not moving the ball forward—that we are being smart about it and saving lives. This is where we can make that work happen.”

The congresswoman separately spoke about the path forward for marijuana reform during an appearance on Fox Business’s “Kennedy” on Tuesday, saying that the way the election panned out with a GOP House and Democratic Senate reflects a “mandate by the citizens of our country to reach across the aisle and work together.”

“I spent a lot of time on this issue, and it’s great to show the country, the United States of America, that this is an issue where we can really come together,” she said.

While Schumer, Booker and Senate Finance Committee Chairman Ron Wyden (D-OR) filed their own broad legalization bill in July, the so-called SAFE Plus legislation that leadership is hoping to push through during the lame duck is not expected to contain the key descheduling provision that’s also in Mace’s SRA.

And while much rides on GOP leadership in the House, some advocates like NORML Political Director Morgan Fox recently told Marijuana Moment that they don’t necessarily view it as an impossibility that the chamber moves on something that goes beyond the incremental next session.

If they do, “then the Senate would be a somewhat easier lift,” despite the steep 60-vote threshold required to pass legislation through the chamber, Fox said. He also agreed that the new dynamic—a GOP House and Democratic Senate—“actually does provide a little bit more urgency for incremental measures in lame duck.”

But once that window closes, it’s an open question as to what the Republican House might be willing to stomach in terms of comprehensive reform, even with GOP allies like Mace and Congressional Cannabis Caucus co-chair Dave Joyce (R-OH) advocating for change.

With respect to future leadership in the House, with Minority Leader Kevin McCarthy (R-CA) winning an internal caucus vote for nomination to be speaker on Tuesday, Mace said that she’s “only going to support leaders who understand that my issues might be different than other members issues and that are open to working with me on a number of different fronts.”

McCarthy, who has voted for cannabis banking legislation but against legalization measures, will still need to get 218 votes on the floor of the House in January to become speaker.

Mace said that she hasn’t yet talked directly to McCarthy about marijuana but she does “intend to speak with my leadership about what we might be able to achieve and in what what direction and in what order can we get some movement on this issue.”

We’ve got to move #cannabis forward in a fair and responsible way. #SRA

She pointed out that, during last week’s election, she flipped Democratic precincts in here South Carolina district and “outperformed every measure, including in Republican precincts” while campaigning on a pro-legalization platform.

“I proved that as a fiscal conservative, this is a winning issue,” she said. “You’re going to win your primaries and your general elections. The majority of America is with you.”

To that point, the latest Gallup poll that was released on Tuesday found that national support for legalization has held steady, with 68 percent of Americans in favor of the policy change. That includes 51 percent of Republicans.

But as last week’s election has demonstrated, support is increasingly contingent on the details of the reform—and that’s as true of the public as it is Congress. Mace is hoping that her SRA, which puts an emphasis on ensuring that state cannabis markets and small businesses aren’t undermined by federal legalization, strikes the right balance for members on both sides.

The congresswoman pointed to the fact that advocacy groups from divergent ideological backgrounds, from NORML to Americans for Prosperity—have voiced support for her proposal.

Still, there are festering concerns about the underlying idea, which Mace has promoted, of shaping federal cannabis regulations in such a way where the plant is treated the same as alcohol.

After Tuesday’s hearing, a coalition of advocates sent a letter to Mace and Rep. Jamie Raskin (D-MD)—who serve as ranking member and chair of the House Oversight subcommittee, respectively—criticizing that concept and taking issue with the fact that a tobacco industry-funded marijuana reform group was invited to participate.

If we treat cannabis like alcohol – we can legalize it overnight.#SRA

While Mace argued that treating cannabis like alcohol is way to expeditiously advance legalization, she told Marijuana Moment that she does understand that there are conflicting views and “there always has to be concern about industry shaping and influencing legislation.”

“But that’s why I try to look at it from every angle and ensure that every side is represented—from from small businesses to large—that we’re looking at it in a way that’s fair,” the congresswoman said. “I think that’s really important to not have any undue influence.”