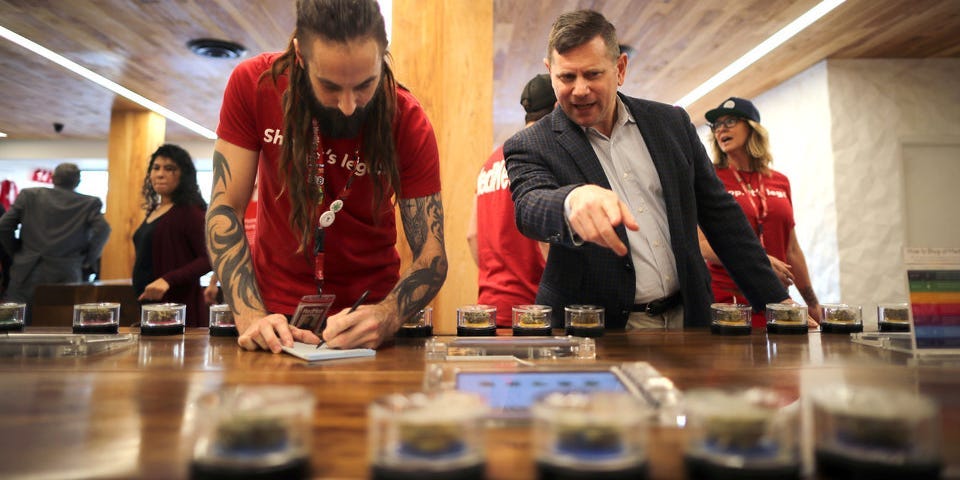 Tilray CEO Irwin Simon says he would have “run the hell away” from a deal with troubled cannabis company MedMen a year ago.

But on Tuesday, the Canadian cannabis giant bought about $165 million worth of MedMen’s debt, in a convoluted deal that Simon says gives Tilray the option to acquire a majority stake in the US cannabis retailer, pending federal legalization.

In July, Simon told Insider that he was ready to make a deal in the US — and he acted quickly.

“MedMen at one time was compared to Apple stores,” Simon said in a Wednesday morning interview.

“It went through management issues and financial issues, but one thing it maintained was that iconic brand,” he continued, alluding to the red packages and storefronts that the company is known for.

The US cannabis industry could skyrocket to $100 billion by 2030 if legalized federally, according to Cowen’s Vivien Azer. That’s a big opportunity for Canadian firms like Tilray.

Tilray is listed on the Nasdaq exchange, which doesn’t let its companies sell marijuana in the US. So Tilray bought a slice of debt, or convertible notes, through a special purpose vehicle from Gotham Green Partners, a fund that invested in MedMen.

Convertible notes are a type of debt that can convert to equity at a later date, and Tilray’s chunk can convert to 21% of MedMen’s outstanding stock.

Simon told Insider that Tilray’s goal is to eventually become a majority shareholder in MedMen, if or when that’s permissible. He said Tilray can sell the notes if legalization never happens.

Canadian cannabis companies have been using complex deals to secure the option to enter the US market.

Some US cannabis CEOs, like Green Thumb Industries’ Ben Kovler, have called out these Canadian companies in interviews with Insider for how they portray these deals to investors.

“I’m a CEO of a large Canadian cannabis company and you know, I’m not lying to our investors,” Simon said in response.

He did acknowledge the challenges in communicating complex deals to Tilray’s base of mostly retail shareholders, however, and added that “there’s got to be a better way to do this.”

Coming off of the heels of the MedMen deal and the mega-merger with Aphria, Simon has said that he wants Tilray to grow into a $4 billion empire by the end of 2024 and that the company will make deals to get there.

“By no means is this the last of acquisitions or investments that we’ll be doing,” he said.

MedMen is working on a turnaround with a fresh $100 million

Simon isn’t shy about why he chose MedMen as Tilray’s first plant-touching investment in the US: he says the company’s brand is iconic and its prices are cheap.

MedMen also landed a $100 million investment from Serruya, a private equity firm, giving the company a much-needed financial boost to pivot from restructuring to growth, MedMen CEO Tom Lynch said in an interview.

Lynch said he’s ready to focus on growing MedMen again, rather than making cuts to restructure the company.

Canadian companies are clamoring to get into the US

The deal shows that Canadian cannabis companies are clamoring to access the larger and far more lucrative US market, Dan Ahrens, the COO of AdvisorShares, told Insider in an interview.

Ahrens is the portfolio manager for AdvisorShares’ US cannabis ETF, MSOS.

“The deal shows just how badly Tilray wants access to the United States,” Ahrens said, adding that MedMen is one of the “least attractive” MSOs, and larger MSOs like Curaleaf or Green Thumb Industries could be more attractive targets.