I tried a '420-friendly' coworking space with smoking, edibles, and a weed-infused menu. Here's why I'll go back. - Read of Green 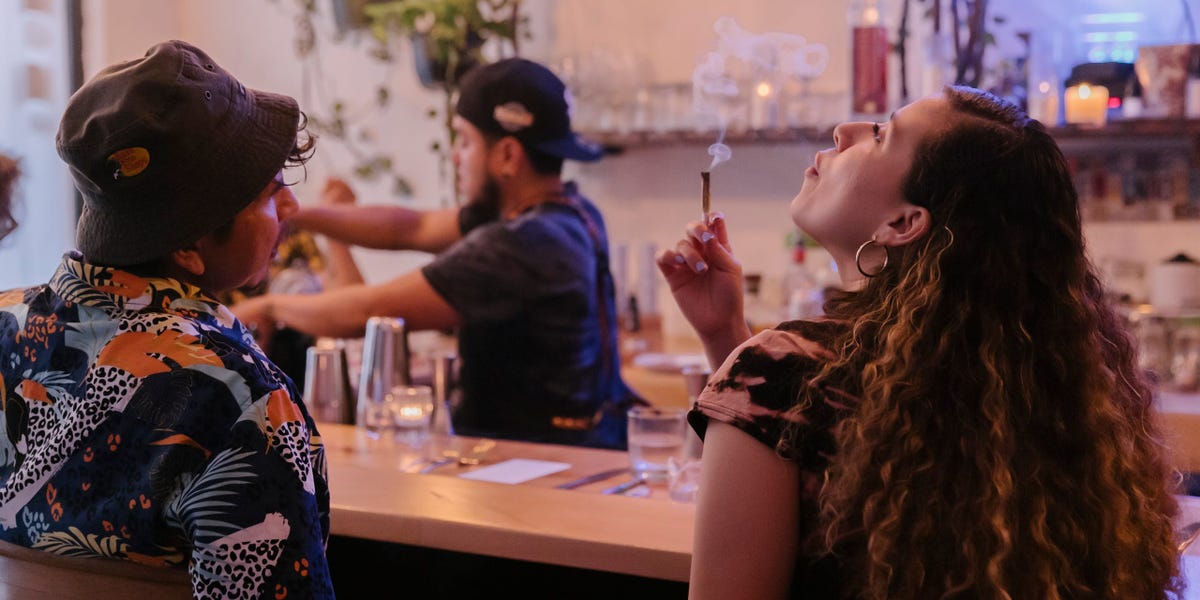 I discovered We Toke Club, the first members-only, cannabis-friendly coworking space in Chicago, through the mailing list for Herbal Notes — a local THC-infused private dining club run by a chef named Manny Mendoza. The club has been active in Chicago and San Diego for a number of years, considered to be one of the go-to places for artisan cannabis-club dining experiences today.

“Members Only — We Toke Club!” The subject line blasted. The email called it a Chicago “co-working space that is 420 friendly.”

A weed-friendly coworking space in Chicago? How are they making that work? I had to check it out.

Intrigued, I emailed back to get in touch with Mendoza and see what was going on for myself.

Located in Chicago’s Pilsen neighborhood, We Toke Club is exactly what it claims to be: a cannabis-friendly coworking space. It’s warm and inviting, with a contemporary, artsy coffeehouse vibe.

When I came in, I was greeted warmly by the manager, Ruben. A few patrons were sitting at the bar area, and a few others were scattered at various tables in the space. Patrons were smoking or consuming edibles. Most looked up and smiled, but quickly went back to their laptops. This was still a workspace, after all.

It was fairly busy on this Tuesday morning and seats were at a premium, which I wasn’t expecting. Even though it was just my laptop and me, and the building’s space included two floors, I still had to look around for a good place to sit. The upstairs section was blocked off because the Hispanic Chamber of Commerce was holding their monthly meeting, which also made the kitchen very busy.

I opted for a seat at the bar for a while, logging onto the free wifi, drinking the bottomless coffee that comes with the membership, and briefly chatting with two people who were in the psychedelics industry. The club doesn’t sell weed products due to its licensing agreement, but members are free to bring their own and indulge however and whenever they want — including giving it to the kitchen to infuse into the dishes on the menu.

I found the outside sanded patio area to be the most fun and unique part of the place. With its seating and a tented area, it was a major draw. If I were to regularly work out of a cannabis-friendly space, this is what would most motivate me to make the trip.

And the patio isn’t just for work — it’s also available for private event buyouts, and on weekends, you can come in for movie nights and sporting events without guests having to deal with a raucous sports-bar atmosphere.

I took a break so that I could fully be present in that patio atmosphere. I sat back with my iced mocha cappuccino — the kitchen had infused it with the CBG oil I had brought with me. I was alert, with a strong caffeine buzz, but I was also relaxed, calm and comfortable.

I grounded myself in the September breeze, kicking back on a lounge chair, taking in the greenery and sandlot around me. And it hit me right then that this was the one of the best things We Toke Club has to offer: the perfect space in which you can be productive, then take recharging breaks, center yourself, and maintain your inner balance. A great way to avoid burnout while achieving high productivity at the same time.

I spent a few minutes chatting with owner Manny Mendoza to learn more about his vision and goals for We Toke Club. He was unassuming and very welcoming.

“We’re fully licensed for food and alcohol here,” Mendoza said. “This place is more than just a coworking space. I also want it to be an educational community about cannabis, forward-thinking with intention and purpose. This is going to be a hub, building community and culture, including BIPOC and women in the industry.”

We Toke Club isn’t open to the public; it’s a members-only club. That’s how they make it work. They offer coffee, tea, breakfast items such as Mexican chilaquiles and fried chicken and waffles, and lunch items such as sandwiches with house-made bread, as well as vegan options.

Membership day rates for the club are currently $30, while the initial monthly rates are $180 for a member and a guest, but expect these rates to increase shortly. Members and their guests need to be 21 or over. For anyone interested in becoming a member, they can subscribe to the Herbal Notes’s email newsletter for more information. Herbal Notes sends out updates as to when memberships are available for purchase, on a first-come-first serve basis.

“People come from all over,” Mendoza said while showing me the kitchen. “We’ve got 25 members so far, and this is only our second month.” Carlos, the chef, managed to take the time to say hello as he multi-tasked.

“We’re working on our own licensed infused oil products though through a partnership with a license holder,” Mendoza added. “The oils will be available for purchase at local dispensaries for members to bring to the club. We’re really excited about these infusions because we’re not only going to focus on THC. We’re also going to include CBD-only choices, also focusing on terpenes and flavor. It’s not just about getting high.”

And where does Mendoza see federal legalization going? “I see it happening within 5 years,” he said.

Are you wondering if you’ll get anything done if you try to work out of a weed coworking space? Assuming you’re a reasonably disciplined person, you’ll be pleasantly surprised.

The members at We Toke Club were focused and working. The club had a relaxed and laid-back atmosphere, even a communal one, but not a party vibe. So if you’re a weed enthusiast, you work remote, or you’re a solopreneur, this could be a great fit for you.

The only drawback for a cannabis-friendly coworking space is that it might be hard to attract people who live far away over a long period of time. Once the initial novelty of the space wears off, people may just prefer to work at home.

My biggest takeaway from We Toke Club is that it is more than just a coworking space. Any coffeehouse or shared office can offer coworking, but We Toke Club is much more than that. I found that I could go to the club to work alone if I wanted to, or to network and get to know others, or both. I could come back with a group, or hold a special event.

It’s a community — a place in which you can find like-minded people with shared culture and values. That’s the X factor that will make me return, as it will for others as well.