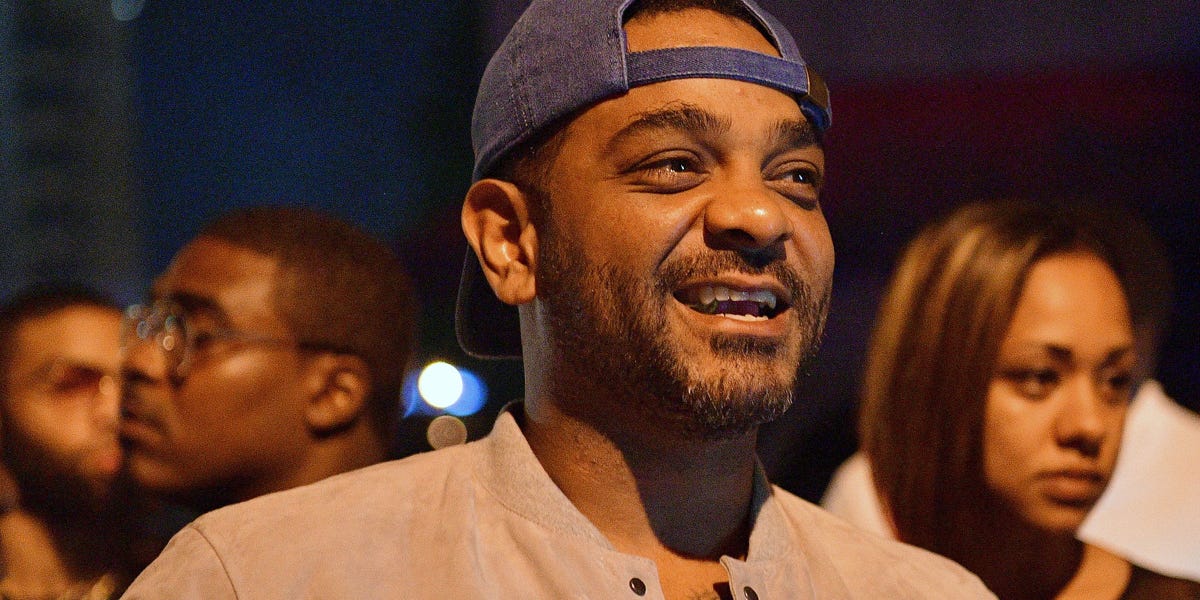 Last month, I spoke to Roc Nation rapper Jim Jones and celebrity jeweler and entrepreneur Alex Todd about the trajectory of Saucey Farms and Extracts, the cannabis brand they co-founded in 2019.

video call took place two weeks after Jones and Dipset faced The Lox in a Verzuz battle at Madison Square Garden. Our call was rescheduled in the aftermath of the event after Jones caught COVID-19, which he was on the mend from when we spoke.

Jones joined toward the end of the 30 minute call with a lit blunt in hand. Todd related that he hadn’t heard from Jones in days, and Jones replied that no one had heard from him as he recovered.

John Lynch: I’m glad to see you recovering though, man. I was gonna ask if you’re back smoking yet, and I see that you are.

Jim Jones: Yeah, definitely back smoking. It was good, though. I got to take almost a week off of smoking. In that seven day span, I might’ve smoked one blunt that I had in the ashtray off and on, you know what I mean?

Todd: You didn’t even feel like smoking, huh, when you were sick?

Jones: Nah, the urge to smoke was gone. And the smoke was tasting like burnt hay. You can’t even taste the smoke. It was just all bad, man. Word.

Launched in June 2019, Saucey Farms and Extracts traversed “a pretty crazy two years, considering the pandemic,” Todd said at the start of the call. “We got a good six to eight months in before all the craziness really started.”

The brand’s launch in 2019 coincided with a subsidiary line of cannabis products called CAPO, named after Jones’ Dipset moniker. Todd said that Saucey’s inaugural product, a pre-rolled blunt line from Jones called CAPO Blunt (Triple F’n OG), has remained one of the brand’s top-selling items among its selection of other pre-rolls, vape cartridges, and cannabis flowers.

After starting out in California dispensaries, Saucey expanded into Oregon and has a launch imminent in Michigan. The brand has scaled its operation into two facilities, located in Oregon and California and staffed by growing teams of cultivators and experts in cannabinoid research.

Through most of the pandemic, and until recent months, Saucey had been hovering around a “hundred dispensary mark, and then hitting a little bit of a brick wall,” Todd said, in reference to the count of stores that sold its products.

“We’re a fairly small company compared to some of the MSOs (multi-state operators) out there and some of the people that we’re competing against,” he continued. “It’s just so far you can go on your own before you’re going to need some help on the distribution side.”

Partnering with ‘the big, big homie’

Help came in the form of a partnership with the man Jones referred to in our call as “the big, big homie” — his Roc Nation label boss, Jay-Z.

In May, Saucey entered into a management and distribution agreement with The Parent Company, Jay-Z’s holding company in the cannabis space. Todd said the move helped Saucey “get over the hump” of its previous dispensary threshold, placing the brand’s products in more than 200 dispensaries as of last month.

“Jay is a smart individual. I mean, whenever he steps into something, we all know its going to be at the top tier of what can be done, as far as the power of his structure,” Jones said. “He’s created like an Amazon inside of this marijuana business, especially for people like ourselves, who’ve come up under the culture, now pushing marijuana as a business. He knows where to get in when it comes to business. As opposed to him just coming in with his own marijuana brand and just getting into dispensaries and make it a big thing, he actually made it a platform for other people to come eat with him, and help other people off the platform to enter the marijuana business so that it can be lucrative.”

Todd described the advantage of Saucey’s impending participation in The Parent Company’s “amazing direct-to-consumer outlet,” Caliva, noting that the company will soon distribute the entirety of Saucey’s product line through an app that delivers direct to California-based consumers.

He went on to discuss the potential impact of Jay-Z’s role in the cannabis space more broadly.

“I’m happy to have him in the space. I know with that happening that a lot of good on the reform side is going to happen,” Todd said. “A lot of good stuff on getting people into the space that maybe weren’t able to be there involved.”

As The Parent Company’s chief visionary officer, Jay-Z leads a social equity ventures initiative that has given out $10 million to brands founded by Black and other minority entrepreneurs in the cannabis industry. Last month, The Parent Company made a historic hire when it brought on former Clorox executive Troy Datcher as its CEO, marking the first time that a Black CEO has been tapped to lead a major, public cannabis organization in the US.

At the start of the call, Todd said of Saucey that its “moniker has always been like ‘An East Coast brand that had no choice but to take its talents out to the West Coast,’ because it wasn’t legal here.”

The New York-based cannabis brand naturally has its eye on expansion into the East Coast following the legalization of recreational marijuana in New Jersey last year and New York in March. The topic resulted in the following exchange, which has been edited and condensed for clarity.

Lynch: As a New Yorker, what does legalization in New York mean for you personally, and for the brand down the road?

Jones: Oh man. I mean, of course there’s a lot of different benefits to it being legalized. But for us, the pet peeve was us being locked up for all the years. I could probably say I’ve got 20 some arrests off of marijuana charges throughout my lifetime of smoking weed, running through Harlem, trying to duck and dodge police. Getting locked up for a roach this big [gestures a small roach between forefinger and thumb]. So now, to be able to smoke marijuana in the same place you can smoke tobacco is phenomenal. It feels good [laughs].

Lynch: I can attest to it, man [laughs].

Lynch: What about, from a business standpoint, what do you think about the East Coast expansion of the company? How do you see that?

Jones: I think once we get everything straight and we do start to bring Saucey to the New York and New Jersey area, it’s going to be crazy. I’m looking forward to that actually, for all the things that we can do. I mean, for the most part, California is probably the largest place you could buy weed legally and things like that. But New York is one of the greatest states ever, and now we’re legal here. Saucey is a New York based company that took our talents west so that we can create the buzz and make some money off of this business. Now, we can go and bring it back home.. It’s New York. We might buy a whole Saucey building. It might be like a “Great Adventures of Marijuana.” You never know what we gonna do, you know what I mean? Like, trust me..

And it’s a blessing in disguise for all the people that have been locked up for so many years through marijuana now, convictions being overturned, which is dope. We got the social equity programs now allowing the same people that have been locked up for the same thing to come out and do business with and learn business with. So, these are the things that we’re going to implement in New York also, especially from a Saucey side, just to make sure that we contribute as much as we can to helping to give back to people that have been affected by the marijuana charges throughout the years. You know what I mean? That’s one of our main focuses and things like that in New York, as a big community of that going on because it was never legal here. It was never easy. It was always hard. So for us to be able to come put on for our city and also give back to those who need it, it’s going to be a great feeling.

Todd: We’re like old school hustlers. We go give back to the community in general. Like, we have a backpack drive we doing. Christmas time comes around, we’re giving away gifts. Thanksgiving, giving away turkeys. Just like the old school hustlers back in the days that used to hustle. At the end of the day, they used to do their thing, but they always took care of their communities. And that’s why the communities always felt safe around the hustlers because the people that were hustling, they had their own hustles. That was a separate thing, but the community was always safe and the community was always taken care of by the actual people that were getting money. And the only people that were getting money were the hustlers.

So, we’re just trying to create this in a legal fashion where we still giving back to the community. And we still selling drugs at the end of the day. You know what I’m saying? We’re just doing it legally now. And there’s literally 40,000 prisoners right now in jail for something that we’re trying to make a billion dollars from. So we just try to give back and try to do as much as we can for the communities, and whatever we could, man, in terms of reform. And that’s one of the most important things from us from the start.

Lynch: I’m not trying to get into the Verzuz, but while I have you, I have to ask about The Lox pack.

Jones: [Laughs]. Shouts to The Lox, man. Shouts to the whole Dipset. Was a great night for hip-hop above all. Jada definitely came to play. One of the greatest feelings of my life being on stage in that capacity. I know it’s never been done before, and the only place that it could be done would be New York. And to see that type of aggressive dysfunction end in the type of love that it did, it showed that the hip-hop culture is still the greatest moving organism moving. You know what I mean? All the antics that both sides did was all marketing strategies to get people more excited about what we were doing and things like that. But one thing I can say about The Lox pack, we made sure we put very good weed in it.

Lynch: I was gonna ask [laughs].

Jones: We made sure we put the top, top weed in there, so they would never be upset at me for putting no boo-boo inside they bag. But shouts to the Lox, man. Shouts to Swizz. Shouts to Timbaland. Shouts to everybody that partook inside that Verzuz. Great night. I’m still smiling from that night.