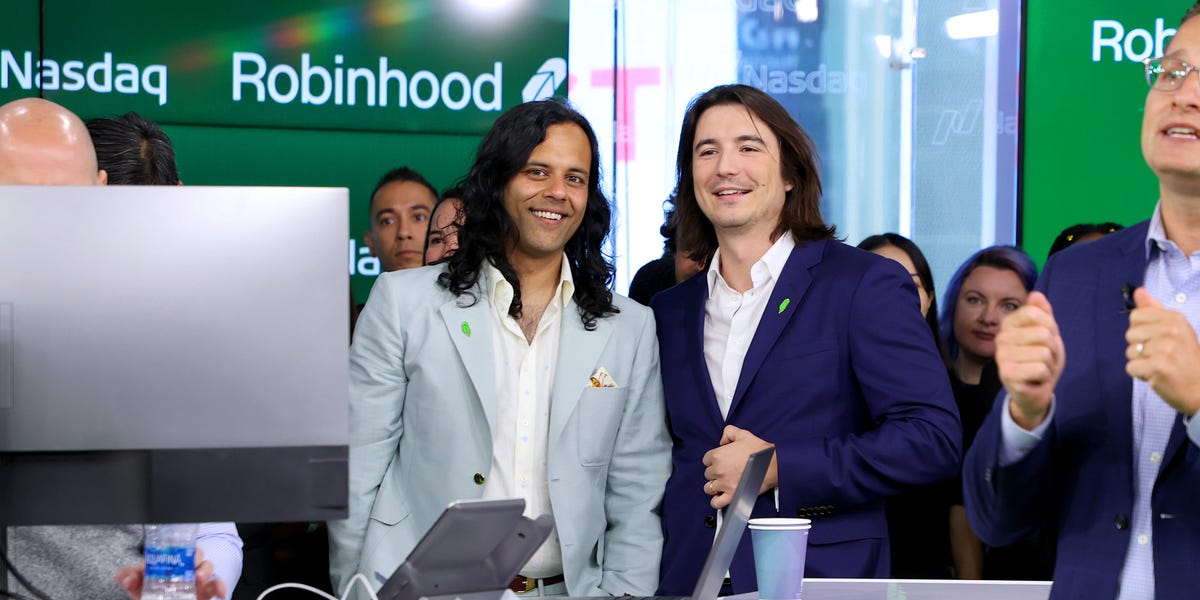 This article was originally published in June, but has been updated with information on Robinhood’s planned acquisition of Say Technologies for $140 million.

Tilray CEO Irwin Simon knows a thing or two about putting together deals.

As the founder and CEO of Hain Celestial from 1993 to 2018, he pursued 55 acquisitions while building the health-foods and supplements company, gaining a reputation on Wall Street as an expert dealmaker.

But the difficulty of closing those deals paled in comparison to the $4 billion Tilray-Aphria cannabis megamerger that closed in May after a series of setbacks, Simon told Insider in a recent interview.

Tilray postponed a shareholder meeting to vote on the deal, initially set for April 16, by two weeks. It also reduced the quorum needed to vote on the proposed merger from a majority of stockholders to a third.

The delay was not due to reluctance on Tilray’s part, despite the recent challenges for Canadian cannabis producers, Simon said in a May interview. It was a result of the makeup of Tilray’s shareholders, roughly 79% of which are retail investors.

“It’s hard to get those shareholders to show up and vote,” Simon said. “You know, nobody has home phones anymore. No one answers their cellphone to an unknown number. When you mail a proxy to someone’s house or apartment, it goes in the garbage.”

Proxy voting, the process of holding a vote among shareholders on a resolution, typically occurs during annual shareholder meetings, on everything from the approval of new directors to compensation for top executives. Voting also occurs to finalize a deal.

And the process has taken center stage as companies struggle to get enough shareholders to vote. On Tuesday, Robinhood announced plans to acquire investor-relations startup Say Technologies for $140 million.

“With Say, we are taking another step forward by making it easier for everyday investors to participate as owners. We’re excited to democratize shareholder access as we keep working to deliver the money app for the next generation,” Aparna Chennapragrada, chief product officer of Robinhood, wrote in a blog announcing the news.

Lack of participation in proxy voting has reached a tipping point recently. In July, Churchill Capital Corp. IV, which sparked investor enthusiasm with its plans to acquire electric-car developer Lucid Motors, adjourned its special meeting because it had trouble getting holders of the majority of its shares to show up and vote.

The measure ended up passing with 98% approval, according to the company, but it took effort from executives, with Churchill’s chair Michael Klein dialing into an investor conference call to walk them through the process of voting their shares online.

As for Tilray, the company tried texting and emailing shareholders directly, among other ideas, Simon said. The experience hammered home the idea that “you’ve got to have good data and analytics on who your shareholders are,” he added.

While institutional investors are well versed in the importance of proxy voting, small companies are finding that Main Street investors lack the experience or the interest to participate. As a result, they’ve had to come up with innovative ways to get in contact with their shareholders.

The issue has led to the launch of several startups looking to redefine how public companies interact with their shareholders. And while the work of investor communications might lie behind the scenes — or screens — of flashy mobile brokerages, it plays a critical role in the functioning of the public-equity markets.

“When we started out four years ago, it was quite common to hear from people that we were wasting our time focusing on retail. That certainly changed over four years,” Alex Lebow, the cofounder and CEO of the online investor-relations platform Say Technologies, told Insider in June. “I’d say in the last few months it’s been supercharged by what we’ve seen.”

Getting out the (shareholder) vote

Big companies that are mostly owned by institutional investors typically have no problem getting enough shareholders to vote at their annual meetings. But for smaller companies, turnout can be an issue.

A recent paper by Alon Brav, Matthew Cain, and Jonathon Zytnick found that retail investors represented about a third of shareholders at the smallest of public companies. That’s about twice the amount in larger firms.

Some companies with large retail-investor bases have gone as far as to cut their quorums, or required turnout levels, so that business can go on.

AMC Entertainment Holdings, a so-called meme stock, cut its investor-meeting quorum in May to 33.3% of shares from 50%. The company has said that more than 80% of its shares are held by retail investors. A spokesperson didn’t respond to a question about why its quorum was reduced.

SunWorks, a solar-power-systems company, also recently lowered its quorum to a third of shares. It cited a problem that proxy-solicitation professionals said has been simmering for years: fewer discretionary votes.

Discretionary votes allow brokerages to cast votes for customers’ shares on their behalf. Brokers used to be able to cast them on a wide range of issues, including uncontested director elections. However, limitations on what discretionary votes can be used for were put in place about a decade ago; one of the few issues that brokers can now cast their customers’ unvoted shares on is a company’s selection of auditor.

When discretionary votes do occur, some brokers vote with a company’s board. Others vote in proportion to how their voting customers vote. Some don’t vote at all.

In 2009, Charles Schwab told the Securities and Exchange Commission that its proportional-voting policy had helped achieve “fairness, transparency and balance in the proxy voting system.” But Schwab stopped casting discretionary votes in 2019, and TD Ameritrade, which Schwab acquired in 2020, stopped in 2021.

Schwab stopped discretionary votes “after an internal review of our procedures,” a spokesperson told Insider. They declined to disclose specifics.

Robinhood, whose commission-free trading has helped spur the frenzy around meme stocks, also doesn’t engage in discretionary votes. The startup has previously worked with the investor-communications service Mediant to facilitate proxy voting. It was not immediately clear how Robinhood’s relationship with Mediant would be impacted if the deal for Say Technologies is approved.

“Given the increase in new retail investors and their interest in using their investments in stocks to make a positive social impact, it’s somewhat surprising that they still aren’t voting. We believe it’s because the adoption of technology hasn’t kept up with the market,” Sherry Moreland, Mediant’s chief operating officer and president, told Insider via email in June.

To that end, Moreland said, Mediant has been looking at new ways of reaching retail voters, including voting through text messages or through an Alexa-enabled device. Mediant customers can also enable in-app push notifications to encourage investors to vote.

“For brokers and public companies, it comes down to using omnichannel technology to meet this new investor where they are,” Moreland added.

Thomas Ball, a senior vice president at Alliance Advisors, said last month that Schwab’s and TD’s policies had bigger impacts on issuers than the policies of newer brokerages like Robinhood and Webull, whose users tend to have smaller stakes in companies.

Companies that don’t lower their quorums may end up having to shell out more to urge retail investors to vote their shares.

If “100,000 Robinhood customers each buy one share, that could cost the company 500,000 additional dollars in just mailing and brokerage costs,” Richard Grubaugh, an executive at the corporate-governance consultant D.F. King & Co, said in a June interview. “It’s all fun and games until you’re the guy who budgeted $500,000 for the meeting and it comes in at $1 million.”

Shareholder engagement is ‘a 2-way street’

Leveraging the intense interest from Reddit presents opportunities and challenges.

Sundial Growers, a midsize Canadian cannabis cultivator that has become one of Reddit’s favorite stocks in recent months, is one such example of the double-edged sword that retail investors represent.

Sundial CEO Zachary George told Insider in June that the support from retail investors — and the resulting surge in Sundial’s share price — had been key in orchestrating the company’s turnaround, from being on the verge of bankruptcy when he took over in January 2020 to being able to “quite easily raise north of $1 billion Canadian.”

But communicating with a large retail-investor base has been a challenge, George said, as there are few ways to reach them outside of press releases and other public statements.

That’s led startups like Say, Proxymity, and Public to look into upending proxy voting. Doing so means competing against one player with a massive market share.

The financial-services giant Broadridge Financial Solutions handles proxy services for roughly 80% of outstanding shares in the US, it said in its 2020 annual report.

Broadridge’s review of the 2020 proxy season noted that 3 million retail positions were voted on using the company’s mobile offering, ProxyVote — a record high. However, retail voters as a percentage of investors remained stable, at 28%.

And while Broadridge said it saw the highest level of voting participation in 14 seasons across all institutional and retail investors, retail positions made up a small fraction of the 419 billion total shares processed by the company in 2020.

Proxymity was developed by Citi’s institutional-clients group before it was spun out as a separate entity in May 2020. That month, Proxymity also announced a $20.5 million strategic round that included BNY Mellon, Deutsche Bank, HSBC, State Street, and JPMorgan.

“If you want to increase participation, you want to make it as efficient and easy, as cost-effective, as possible,” Dean Little, the cofounder and CEO of Proxymity, told Insider in June.

While Public, a personal-finance app valued at $1.2 billion, doesn’t have an offering directly geared toward improving proxy voting, it’s looking to help companies better communicate with their retail investors.

In April it launched Town Hall, a service for public-company CEOs to engage in live Q&A sessions with the app’s customers.

“Building the engagement, it’s a two-way street,” Public COO Stephen Sikes told Insider in June. “If the leadership team needs a vote or wants to advocate for a particular vote, giving them an audience to do that is really important.”

Say Technologies provides a set of API tools that broker-dealers and public companies can drop into their apps or websites to communicate with shareholders and coordinate proxy votes. Tesla has used Say’s Q&A tool to talk directly to shareholders — institutional and retail alike — during quarterly meetings and product launches.

The startup also caters to institutional clients, but it has found a niche in working with companies that are consumer-facing, have a large retail interest, and are founder-led.

“This year in particular, broker-dealers are realizing the importance of this experience, because customers are wanting to engage and vote and have a lot of different options when it comes to brokerage,” Zachary Hascoe, a Say cofounder, said in an interview in June.

“Companies are really trying to figure out how to productively engage with retail investors,” he added.