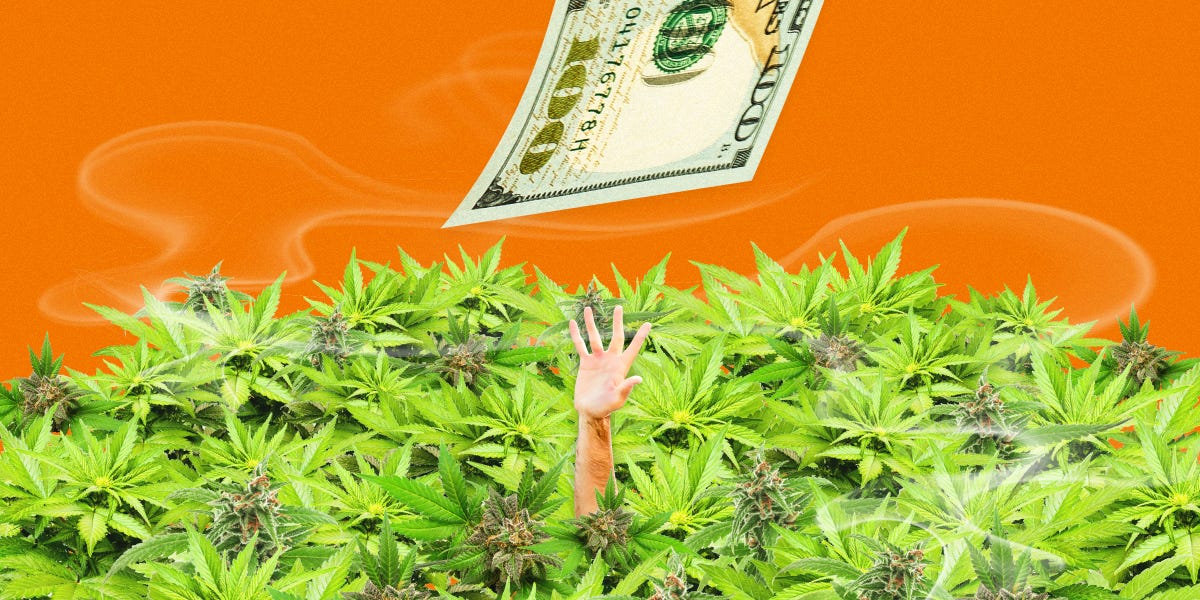 The opportunities in cannabis are immense.

Growing and selling marijuana is set to become a $100 billion industry in the US by the end of the decade according to the investment bank Cowen, and investors have poured billions into companies they’re betting will dominate.

The data and analytics underpinning what cannabis consumers will buy and which products brands should offer could be a veritable treasure trove for companies. Plus, since cannabis is federally illegal in the US, most institutions can’t invest in companies that cultivate or sell it, making these data startups appealing for investors who want to bet on cannabis without investing in the plant itself.

Rootz Research, a cannabis-analytics startup that says it has a proprietary data set that will change the industry forever, is hoping to capitalize on this green rush. But the company has lost the support of one of its “founders” and it hasn’t yet landed funding.

For every startup success story, there’s a company that has let down investors, stiffed employees, and failed to deliver on promises. In the hot new cannabis industry, the stakes are higher, with heavy competition, rapidly shifting regulations, and a lot of money on the line.

Some startups, like Eaze, have corrected course by pivoting their business model. Others, like the media startup Civilized, have been forced to shut down, their founders forced out by investors.

Rootz’s CEO, Eric Spitz, is a serial entrepreneur, having started his first company, a sports data firm, in 1996. Since then, he’s been the CFO of The Narragansett Brewing Company, and he’s been involved in everything from the bankruptcy of the owner of the Orange County Register to various ventures in the cannabis industry.

But it’s unclear whether he can lead Rootz to success in the challenging cannabis industry, given his mixed track record. It is a difficult industry, and Spitz is also facing challenges in his cannabis venture, C4, which he became involved in after the fate of the Orange County Register’s owner.

Rootz has described its analytics platform in a pitch deck and other documents reviewed by Insider as something that will forever change the way people shop for cannabis.

Spitz told Insider in an interview that he founded the company to provide data to predict what cannabis consumers across different demographic categories would buy and help cannabis brands target their marketing to customers.

There are well-known incumbents in cannabis data, including Headset and BDSA, which track consumer purchases and help dispensaries understand which products to offer and in which markets.

Spitz said that since cannabis consumers must show their IDs when they enter a dispensary, Rootz could pull individual-level data — something he contends others can’t do — to triangulate which products a customer will buy next.

Figuring out what customers want to buy in a brand-new multibillion-dollar industry is expected to be profitable.

This year, venture investors have poured over $1.5 billion into cannabis startups, with much of that flowing to tech and analytics firms. Dutchie, a platform that connects cannabis shops with consumers, won a $1.7 billion valuation this year, and the cannabis-information site Weedmaps trades at a valuation of $1.9 billion. Leafly, another information site, was valued at over $500 million this year.

Spitz was eager for press attention for Rootz

Insider started reporting on Rootz after Spitz tried to get in touch multiple times through LinkedIn, Twitter, and email, leveraging a connection with another reporter for credibility.

Spitz pitched Rootz to Insider and to investors by touting the credentials of its founders, three of whom he said are professors at the Wharton School of the University of Pennsylvania.

He said he planned to spin Rootz out of C4 Distribution and raise money in a Series A funding round. He pitched that story as an exclusive for Insider.

After a series of background phone calls in late July and early August, Spitz sent Insider the pitch deck, dated July 2021, that the company had been shopping around to investors, as well as PDFs with dozens of pages of complicated charts to tout the company’s abilities.

The deck showed that Spitz wanted to raise up to $5 million at a valuation of about $10 million.

Rootz hasn’t launched or raised any funding — Spitz says it’s trying to go “from 0 to 1.”

In its deck, Rootz highlights the “Customer Centricity” strategy developed by Peter Fader, a marketing professor at Wharton, and his colleagues Fader and another Wharton professor, Leonard Lodish, were touted by Spitz in conversations and listed as founders in internal documents that Insider reviewed.

Fader had a different story. He replied, leaving Spitz off the email thread, that Spitz had “grossly misrepresented my role” with Rootz.

Lodish, a founder of the market-research firm IRI, is Spitz’s uncle. He told Insider in an interview that he was OK with being called a founder.

The third founder Spitz referred to, Bari Harlam, studied under Lodish for her Ph.D. at Wharton and taught classes and serves on corporate boards including those of Rite Aid and Eastern Bank. Harlam was also touted by Spitz and listed in internal documents as a founder. She didn’t respond to requests for comment through multiple emails.

“I’m not really sure what the problem is,” Spitz said.

Fader said in a follow-up interview that he was a family friend of Spitz’s and that he’d worked closely with Lodish at Wharton. He said he’d invested in Spitz’s other cannabis venture, C4 Distribution.

Fader said he met with Spitz and his team a few times, starting late last year and continuing through July, to help advise on the technical details of Rootz’s model but ultimately decided he wasn’t confident in Spitz’s management and his ability to utilize the data for the cannabis industry.

“I would express concerns about the data over and over,” Fader said. Specifically, he said the data Rootz was working off was too incomplete to provide broad insights into consumers’ habits.

Spitz shared documents with Insider that he said Fader viewed and that showed Fader as a founder, along with Lodish and Harlam. He said that Fader was an active participant on calls including Harlam and Lodish where they discussed starting the company and that Fader “dove right in.”

Fader acknowledged that Spitz had shared documents referring to him as a founder but said he had never signed any formal documents or verbally agreed to be called a founder.

“I think he was kind of amplifying the roles we might’ve had because it would look better,” Fader said.

There are often disputes in startups about who is and isn’t a founder. There isn’t a clear-cut legal definition, but the title is often understood to refer to a person or group of people who have an idea and develop a business around it.

Spitz said he was “guilty” of using Fader’s name to attract investors and media attention, though he said he didn’t think he was doing anything wrong, as he thought Fader was aware that he was being referred to as a founder.

“It really hit me that these portrayals he was making were as extreme as they were and that people could really get the wrong idea,” Fader said. “Eric is the founder. It’s his idea, his execution, his fundraising plan.”

Fader said he cut ties with Rootz in August.

Some of Spitz’s other projects have struggled

Spitz is no slouch when it comes to academic credentials — he graduated from the University of Pennsylvania and went on to business school at MIT.  But at least two of his past projects have faced challenges.

In a letter that Spitz sent to C4 shareholders on August 13 and that Insider reviewed, Spitz said that because of the difficult environment for financing cannabis companies, C4 would be diluting existing shareholders. Spitz offered shareholders the ability to purchase new shares to maintain their ownership stakes.

In a follow-up letter reviewed by Insider, Spitz apologized to his shareholders and said he’d “definitely botched this rights offering.”

“Our financial situation has become dire, given our unexpected inability to raise new capital from external investors,” Spitz wrote. “If we do not complete our offering, we will have no choice but to shut the business.”

Spitz defended the two letters in an interview with Insider. He said that it was a standard coercive rights offering and that the “money was coming in,” though he declined to go into specifics.

C4’s president, Hank Casillas, left C4 Distribution in September after six months on the job, according to a letter that he sent to the company’s investors and that Insider reviewed. “Ultimately I had to decide if I could continue to compromise my belief system to justify the end goal,” Casillas wrote in the letter, sent September 25, about his short tenure at C4.

Though Casillas’ letter is styled as a letter of resignation, Spitz said he fired Casillas and that the letter was “his way of making himself feel better.”

Casillas told Insider that he was not fired and that he resigned in a meeting with Spitz and others on September 24. Casillas added that he was never given termination paperwork, nor has he received his final two weeks of pay — which is required under California law.

Spitz also was part of the ownership group, Freedom Communications, that ran the Orange County Register from 2012 to 2016, a period that ended with him and his partner facing multiple lawsuits, including over the alleged mismanagement of employee pension plans. In 2019, he and his business partner settled with Freedom Communications’ employee pension plan for $7.8 million.

Rootz could be worth millions. Or it could fail before it even launches.

The core idea behind Rootz — figuring out what cannabis consumers want to buy — could be lucrative.

But as with any startup, the odds of succeeding are slim. If Rootz is successful, Spitz and his team could make millions, especially in the fast-growing cannabis industry.

Since the cannabis industry launched in earnest less than a decade ago, it has had its fair share of disingenuous founders and failed companies. It’s unclear whether Spitz will lead Rootz down a more successful path.

Spitz described Rootz as a startup trying to go “from 0 to 1.” It’s an open question whether it’ll ever leave zero.

Editor’s note: This article was originally published on Sept. 30 and updated on Oct. 3 to clarify the reference to “Customer Centricity” in the Rootz slide deck, to indicate that Eric Spitz’s role had been with the parent of the Orange County Register, to include further response from Spitz about Casillas and that Casillas returned Insider’s request for comment after publication.