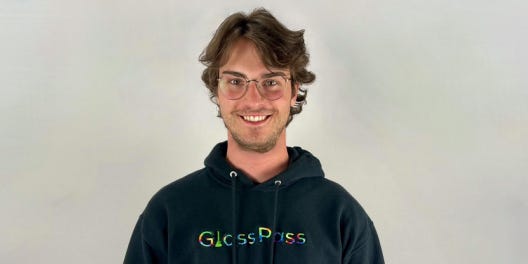 Business: A marketplace for glass-art enthusiasts, which focuses on high-end bongs and pipes.

Backstory: When McDonnell launched GlassPass in 2017, he was still a sophomore at the University of Southern California and wanted to create a place where glass enthusiasts, mostly those creating luxury bongs and pipes, could safely buy, sell, and auction their art.

“Our vision is to be the go-to spot for glass lovers,” McDonnell said. “As legalization gets nearer, I believe high-end glass art will become a commonplace collectible item in many homes, similar to fine china or luxury watches.”

Wall Street analysts expect the cannabis industry in the US to be worth $100 billion by the end of the decade. Sales topped a record $17 billion last year, and the market is already worth more than $28 billion.

In other words, GlassPass wants to become the Sotheby’s of the marijuana marketplace. In 2019, it began selling hoodies and bong mats, and in March, the company launched its official marketplace app, with plans to release more limited-edition drops, create a social-networking community, write editorials, and even host virtual events.

But naturally, the company wants to get into crypto first.

Growth: GlassPass, which takes a percentage of all transactions, processed more than $500,000 in sales and sold about $30,000 in merchandise this year, per documents the company gave Insider.

The company’s app has over 20,000 users and has grown nearly 30% month over month since March, McDonnell said, and the company is set to launch cryptocurrency payments by the end of December.

The company has over 30,000 Instagram followers, with high-profile followers in the glass community including Mothership Glass and Sovereignty Glass.

Before GlassPass: McDonnell worked as an associate account executive at Amazon Web Services before leaving in April to focus on GlassPass full time.

Challenges: Each phase of the company has posed different challenges, McDonnell said. For example, he said the company tried to launch a website in 2019 but found it was “buggy, unattractive, and outdated,” so he and his team built a mobile app instead. Then, it took six months, in the middle of a pandemic, to find a bank that would process the payments made on the app.

“Throughout all of our challenges, the only constant was our community,” he said. “When we faltered, failed, or delayed a release, they never skipped a beat and encouraged us to keep going.”

Business advice: “Focus on what you know,” McDonnell said. “What you don’t know can always be learned later or supplemented.”

Business mentor: McDonnell said he typically turned to the GlassPass community for help. He uses Instagram polls, for example, to gauge customer sentiment toward new product features and designs.

Why now is the best time to start a business: It’s never been easier to start a business, McDonnell said, especially as access to technology increases. “You can Google anything and find people to build things, without even having to leave your house,” he added. “With a passion, a vision, and networking, I believe you can do anything with the tools available at your fingertips.”

On hiring: GlassPass, which has about 20 people on staff, is split into two main departments: development and social media. The company hopes to expand and hire more. “Our development team is solid, but we need to expand more on the business side in the future, which we’ve already started working on,” McDonnell said.

On managing burnout: McDonnell does his best to eat well, meditate, and get good sleep. He also tries to make time for activities such as hiking, playing guitar, playing video games, and hanging out with friends. He loves spending time with his dog and tries to keep his thoughts trained on the present. “Don’t focus on what you don’t have. Focus on what’s there,” he said. “And don’t long for the past.”