THE NEW GREEN RUSH: Risk-taking real-estate brokers who cater to cannabis companies are cashing in - Read of Green 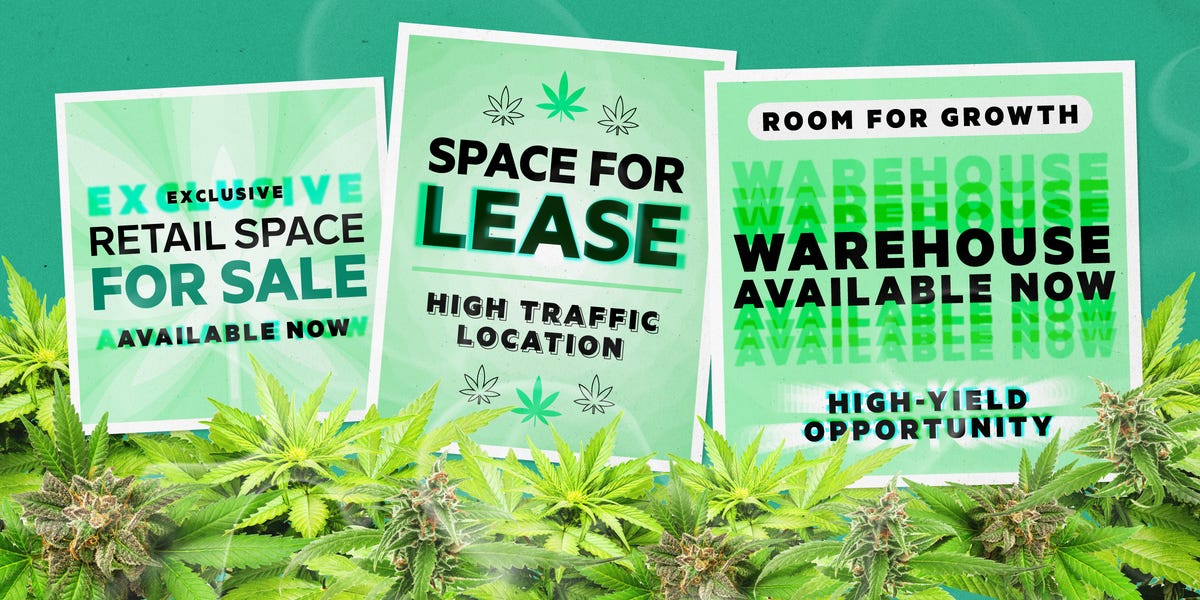 Cannabis companies have hired the Arizona real-estate broker to secure storefronts for medical dispensaries and land and warehouses for farming and processing operations since 2014. And since possession and cultivation of recreational weed became legal in Arizona in January, he’s seen an unprecedented spike in inquiries from companies eager to open shops.

“Just about every single multistate operator is trying to target central Arizona,” McLaren, the CEO of the cannabis-real-estate firm Zoned Properties, told Insider.

One client, looking to grow cannabis outdoors, asked McLaren to hunt for suitable locations across all 15 of Arizona’s counties. A 60-day search that spanned the state, from the towering forests of Coconino County in the north to the desert towns of Yuma County on the Mexican border, turned up only three or four properties that would meet both the grower’s climate needs and regulators’ requirements.

Another cannabis client, he said, searched for a storefront to rent for 18 months. Ten deals fell through before it found its lucky 11th — at a handsome premium.

High rents result in a sweet payday for McLaren or other brokers, who work on commission. But the lack of options for cannabis companies to rent or buy retail and industrial real estate signals the major logistical challenges that lie ahead after legalization.

The side-by-side phenomena of opportunities and obstacles McLaren has seen in Arizona are likely to play out in states across the country now that New York, Virginia, and three other states are legalizing cannabis or reforming marijuana laws this year.

Now, as all signs point to more lenient state-by-state cannabis regulations and even federal legalization, more firms are beginning to expand their practices. Opportunistic brokers at some larger companies are dipping their toes into the industry, sensing a massive opportunity.

“Veteran brokers from these big brokerages are now telling me they’d been given marching orders to create a cannabis division,” McLaren said. “Reps at these firms are calling me looking for education, how to learn the industry.”

But some of the country’s biggest real-estate brokerages don’t allow their employees to touch marijuana deals because of legal, reputational, and business-operations risks.

“Cushman and Wakefield can’t touch it. JLL can’t touch it either,” said Robert DiPisa, a cochair of the cannabis law group at the New Jersey law firm Cole Schotz. The two major brokerages he cited — which together control more than 8 billion feet of commercial space — are skittish about finding warehouses or storefronts for cannabis firms.

“I have relationships with brokers at both and have been in plenty of situations where I have a client, and I’d like to work with them because they’re very good at what they do, but they can’t touch it,” DiPisa said.

Cushman and Wakefield didn’t reply to multiple requests for comment about its stance on cannabis real estate, while JLL declined to comment. Insider also reached out to the largest real-estate-services firm, CBRE, which controls 2.7 billion square feet, to assess its attitude toward the fast-growing sector.

“CBRE’s current policy with respect to cannabis-related services is to operate in compliance with federal, state and local law,” a CBRE spokesperson told Insider. “As the law evolves, CBRE will continue to assess our position.”

Brokers and brokerages can rake in cash from cannabis clients

and has a market cap of $5 billion.

Cannabis clients are, in short, a major source of revenue. Brokerage is a commission business. While commission rates may be the same for cannabis tenants, they often pay major premiums in rent if they’re leasing. That means larger commissions for brokers.

“They are one of the stronger premium-rent payers in the market because there’s a limited supply of where they can go,” Michael Fasano, a managing partner at Ripco Real Estate, told Insider. “If there are three to four cannabis operators competing for a particular area or a site in a given town, it’s going to push up the rents.”

Motivated by big commissions, some brokers have embraced the new world.

Spencer Bones, a vice president at Colliers in Sacramento, started working with cannabis clients in 2017 as an experiment, expanding from his focus on traditional industrial real estate to look for industrial and retail cannabis properties. Only one other brokerage in the area focuses on cannabis, he told Insider, and now those deals make up 80% of his total business.

Bones said he was grateful to even have the “leeway” to try it out from Colliers, even though the company — another major real-estate-services firm, which manages 2 billion square feet of space — had no set plans to get involved in cannabis. California legalized it in 2016, and his experimentation allowed him to become an early expert in a burgeoning industry.

Ripco, a brokerage that operates in New York, New Jersey, and Connecticut, is preparing for a boom in its cannabis business because all three states legalized marijuana this year. Some of its brokers have already built up practices by working in the medical-cannabis industry, so the company has held seminars and workshops on the variety of legal concerns and challenges for brokers that are new to cannabis real estate.

Cannabis may also be a saving grace for retail brokers who have experienced dips in interest in physical stores during the COVID-19 era. Bones contributed to a Colliers study on the effect of cannabis on commercial real estate that found retail rents in the East Bay of California went up 19% between 2015, before legalization, and 2019. Much of this was because cannabis tenants pay 25 to 50% more per square foot in that area, an affluent stretch east of San Francisco.

Still, cannabis alone won’t be able to make up the pandemic dip.

“Cannabis is a new tenant that we can work with,” Fasano, the managing partner at RIPCO, said, “but I don’t think it will be like a nail salon or a barber shop, where you see them almost within a mile of each other.”

It’s not just storefronts but also warehouses. Cultivation happens in warehouses, especially in states like New York that don’t have ideal cannabis growing conditions. The demand for warehouse space is already sky high from e-commerce businesses that boomed during the pandemic — and cannabis could drive those prices higher.

Bones said the market for industrial space exploded during the 2017 “green rush” in California. He said he remembered smaller auto shops and contractors that suddenly saw prices for their 10,000-square-foot warehouses jump from $100 to $150 a square foot as cannabis tenants lined up to fill them with plants and processing equipment.

“All of a sudden, they thought, ‘Maybe I’ll just move out of the area, buy a cheaper building, and put some money into my pocket,'” Bones said.

The risks of cannabis real estate loom large, from zoning to lending

With all this opportunity, why are there stragglers? For individual brokers, the main concern is the complexity of the deals. They may offer bigger paychecks, but they take more effort.

First off, there’s the mountain of regulation at the state and local level. Just because a property can physically hold a cannabis business’ growth, processing, or sales operations, there can be very strict rules keeping them away from schools, houses of worship, or residences. A broker might have to advocate for zoning changes to seal a deal.

This isn’t a new challenge for all brokers, but it can be a major deterrent.

“It’s no different than a broker developing expertise in another industry, like senior housing or nursing homes, that’s heavily regulated by states,” Dan Spiegel, the president of Coldwell Banker Commercial, told Insider.

Property owners who hold mortgages from traditional nationwide lenders may be scared to sign a lease with a cannabis company as long as it’s federally illegal. This means that brokers who work on cannabis deals have to get creative with finding funding for their clients, instead of working with more typical sources of funding.

If individual brokers are willing to put in the work, they then have to see if their brokerage will even allow them to take on new clients. Many, like Colliers, allow brokers to test things out on their own so they can eventually bring their learnings to the whole company.

Still, some of the largest brokerage companies, like Cushman and Wakefield, won’t touch cannabis real estate out of fear of legal repercussions, shareholder revolts, or reputational hits for flirting with a substance that is still illegal across much of the country.

The legal risks stem from the Controlled Substances Act, the statute that makes cannabis illegal at the federal level. DiPisa, the cannabis attorney, told Insider that the act permitted the Department of Justice to use civil-forfeiture laws to seize the property of anyone involved in the distribution or production of illegal drugs.

This, of course, is a huge concern for landlords, but it could even affect brokerages that are intimate parts of any transaction that is federally illegal. While no brokerage has been penalized, the risk creates fear in corporate-compliance departments.

There’s also the reputational risk of working with companies that are selling a drug that is still federally illegal. Stereotypes of tie-dye-clad, red-eyed customers could dissuade highly professionalized companies in the fast-paced, sometimes cutthroat world of real estate.

“There can be a perception that the cannabis dispensary is going to be the flower-child store of the 1960s,” Spiegel of Coldwell Banker told Insider.

While this has kept some away, Spiegel said that once detractors saw the profit-making reality of “boutique-level” cannabis retail, they were more than happy to take the plunge.

“We’re not publicly traded, so we don’t answer to our shareholders,” Rod Beach, a principal at Cresa, told Insider. Cresa, an occupier-only commercial-real-estate brokerage and services firm, is owned by its own employees. A few Cresa brokers have extensive experience working on cannabis deals.

With employees at the helm of its business decisions, it’s unsurprising that Cresa wants a piece of a $50 billion pie. And in time, Cushman and Wakefield, JLL, and CBRE might join it.