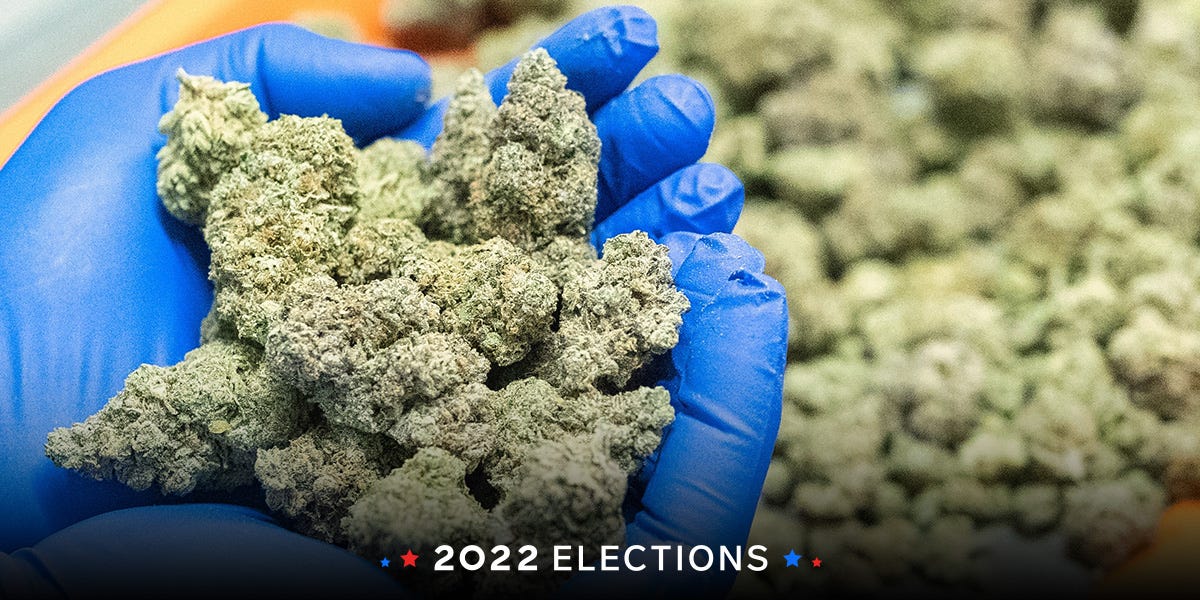 Access your favorite topics in a personalized feed while you’re on the go.

The red wave sputtered, and so did the green one.

Marijuana legalization is immensely popular among US voters, but the path forward is far from linear — that much became clear in Tuesday’s elections.

Legalization was on the ballot in five states, but it only passed in Missouri and Maryland. Deep-red Arkansas, as well as both North Dakota and South Dakota, defeated legalization measures.

“The 2022 mid-term elections were more controversial than we have seen in recent elections, as it relates to cannabis,” analysts from the investment bank Cowen said in a Wednesday note titled “Cannabis’s Green Wave Hits A Wall in 2022.”

A recent poll show that most Americans, both Republican and Democrat, support legalization. Still, the optics of going two-for-five don’t look great to legalization proponents, even if there are some key nuances to the way the legislation was written in each state. It’s important to note, too, that the combined population of Missouri and Maryland is more than double that of the Dakotas and Arkansas.

For one, Arkansas’ measure would have given a leg up to existing medical cannabis sellers, which some opponents say would give them a monopoly on sales. It didn’t include social-equity provisions, such as helping those impacted by the War on Drugs get preferential access to the economic opportunities created by legalization. It also wouldn’t expunge records for those convicted of marijuana-related offenses.

In Maryland, which leans Democratic, proponents cast legalization foremost as a social justice issue. Over 65% of voters supported legalization in Maryland.

In Missouri, historically a swing state but now leaning redder, legalization passed 53% to 47%. Missouri already had a relatively thriving medical cannabis market, and the legalization campaign in the state was well-funded.

For its part, South Dakota passed legalization in 2020, but the law was struck down in court after Republican Gov. Kristi Noem voiced her opposition. And it’s stark how much support has flipped. In 2020, nearly 54% of voters in the state supported legalization. Just two years later, about the same proportion rejected legalization.

While cannabis legalization is popular, it’s far down the list of things voters say they care about, compared to issues like abortion rights and inflation. It’s an open question as to how much the issue drives voter turnout on both sides, and whether federal Republicans could make cannabis into a wedge issue now that Biden and other top Democrats have so publicly owned it.

Only time will tell.