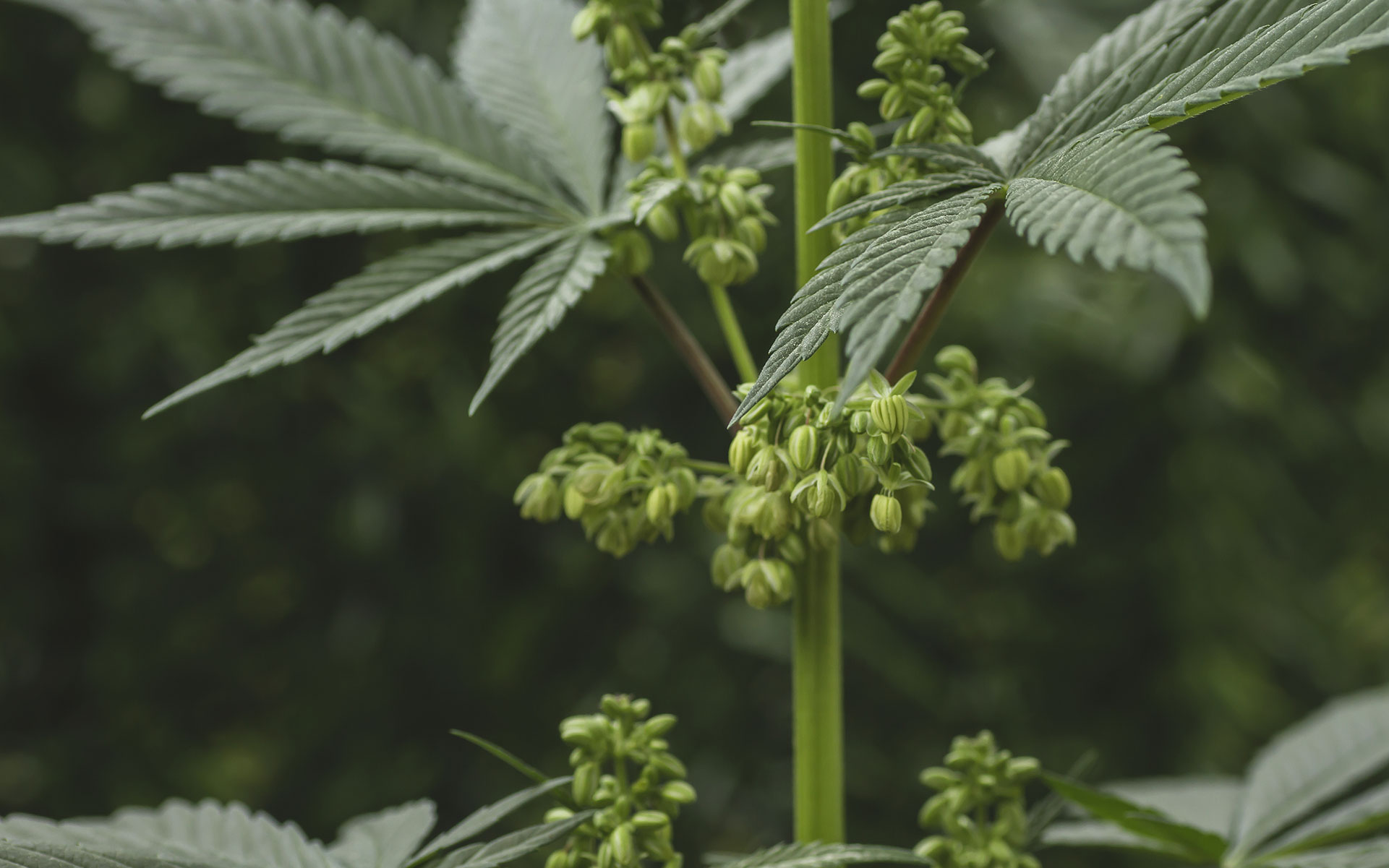 The cannabis plant has several structures, many of which we can find on any ordinary flowering plant species. Cannabis grows on long skinny stems with its large, iconic fan leaves extending out from areas called nodes.

Parts of the cannabis plant

Seeds are produced in female cannabis plants and carry the genetics of a male and female. Seeds need to germinate to sprout and will grow a taproot, which will become the main root that anchors the plant.

These are the first leaves to grow from the seed after germination. They usually come in pairs, and seeing them is a sign of successful germination and that your plant is on its way to growing healthy and strong.

The roots grow down from the main stalk of the plant into the soil. When growing from a seed, the main root is called the “taproot.” Roots are the lifelines of a cannabis plant, pulling water and oxygen into the plant so it can grow healthy and strong.

Mycorrhizae, a beneficial fungus, can be added to soil to improve root systems.

The main stem, or stalk, of a cannabis plant grows straight up from the root system and supports all lateral branches. The stem gives a plant structure and stability.

Often, growers will top, or cut off, the stem after about five nodes, which forces the plant to grow out laterally more, creating more bud sites.

A node is a point at which a branch grows off of the main stem, or one branch from another branch. Fan leaves and buds can grow on some nodes, but not necessarily all.

When determining the sex of a cannabis plant, pre-flowers, or the beginnings of male and female sex organs, will appear at the nodes.

The space between nodes is called “internodal spacing” and will give you a sense of whether a plant will grow tall or short.

Check out Johanna’s full video series on how to grow weed on Leafly’s YouTube.

Fan leaves are the large, iconic leaves of the cannabis plant. They capture light for the plant and typically have little-to-no resin and are usually discarded when trimming.

Sugar leaves are the small, resin-coated leaves that buds form around. Sugar leaves are usually saved as “trim” during harvest and can be used for pre-rolls, extracts, and other cannabis products.

Also known as “buds,” the flowers of a cannabis plant are the fruits of your labor. They contain the cannabinoids and terpenes that get you high or offer health benefits. Flowers only grow on female cannabis plants and must be dried before consumption.

A cola, also called a “bud site,” refers to a cluster of buds that grow tightly together. While smaller colas occur along the budding sites of lower branches, the main cola—sometimes called the apical bud—forms at the top of the plant.

A bract is what encapsulates the female’s reproductive parts. They appear as green tear-shaped “leaves,” and are heavily covered in resin glands which produce the highest concentration of cannabinoids of all plant parts.

Enclosed by these bracts and imperceptible to the naked eye, the calyx refers to a translucent layer over the ovule at a flower’s base.

The pistil contains the reproductive parts of a flower, and the vibrant, hair-like strands of the pistil are called stigmas. Stigmas serve to collect pollen from males.

The stigmas of the pistil begin with a white coloration and progressively darken to yellow, orange, red, or brown over the course of the plant’s maturation. They play an important role in reproduction, but stigmas bring very little to the flower’s potency and taste.

Despite their minute size, it’s hard to miss the blanket of crystal resin on a cannabis bud. This resin is secreted through translucent, mushroom-shaped glands on the leaves, stems, and calyxes.

Plants originally developed trichomes to protect against predators and the elements. These clear bulbous globes ooze aromatic oils called terpenes as well as therapeutic cannabinoids like THC and CBD. The basis of hash production depends on these trichomes and their potent sugar-like resin.

Cannabis is a dioecious plant, meaning it can be male or female, and the male and female reproductive organs appear on different plants. What’s in your stash jar now are the flowers of a female marijuana plant.

Female plants produce the resin-secreting flower that is trimmed down into the buds you smoke, and males produce pollen sacs near the base of the leaves. Male plants pollinate females to initiate seed production, but the buds we consume come from seedless female plants—these are called “sinsemilla,” meaning “seedless.”

Growers can ensure the sex of their plants by growing clones or the genetically identical clippings from a parent strain. Feminized seeds are also made available through a special breeding process.

How to determine the sex of a marijuana plant

Cannabis plants show their sex by what grows in between their nodes, where leaves and branches extend from the stalk. Pollen sacs will develop on a male plant to spread seeds and stigma will develop on a female to catch pollen. You can see these differences weeks before they actually start serving their purposes in the reproduction cycle. These are known as “pre-flowers.”

Pre-flowers begin to develop four weeks into growth, but they may take a little longer depending on how quickly the sprouting phase occurs. By the sixth week, you should be able to find the pre-flowers and confidently determine the sex of your plant.

Examine the nodes of the plant and look for either the early growth of small sacs on a male, or two bracts on a female, which will eventually produce the hair-like stigma.

Females are the prizes of cannabis plants—they are the ones that grow the buds that we all know and love. Anytime you see a picture of a cannabis plant with buds, you are looking at a female plant.

Female cannabis plants receive pollen from males to produce seeds, which will carry on the genetics of both plants to the next generation.

However, cannabis is primarily cultivated for buds, not seeds, so the practice of growing sinsemilla, or “seedless” cannabis, is prevalent today: Females and males are grown separately, or males are even discarded, to prevent pollination. This allows female plants to focus their energies on bud production instead of seed production.

Males and females are usually only pollinated when crossbreeding plants or creating new strains.

Male cannabis plants grow pollen sacs instead of buds. Male plants are usually discarded because you don’t want them to pollinate the females, which will produce seeds—no one wants to smoke buds with seeds in it.

Males are important in the breeding process, but that is generally best left to expert breeders. When pollinating females, males provide half of the genetic makeup inherited by seeds.

Because of this, it’s important to look into the genetics of the male plants. Their shape, rate of growth, pest and mold resistance, and climate resilience can all be passed on to increase the quality of future generations.

Male plants can also be used for:

What are hermaphrodite cannabis plants?

The rare hermaphroditic plant contains both female and male sex organs. These plants can sometimes self-pollinate, but this is typically bad as it will create buds with seeds and also pass on hermaphroditic genes.

“Herming out,” as some call it, is something that generally happens when a plant becomes excessively stressed. Some stressors include:

There are two types of hermaphrodite plants:

Because this occurs when cannabis is under stress, it’s important to monitor plants after they have been exposed to stressors: indoors, high temperatures or light leaks are often the cause; outdoors, a snapped branch might be repaired and then turn into a hermaphrodite.

The other primary cause of hermaphrodite plants lies in its genetics—a plant with poor genetics or a history of hermaphroditic development should be avoided to protect your garden. If you notice any pollen sacs or anthers at any point, remove the plant from your garden immediately to prevent pollination of female plants.

Bailey Rahn and Trevor Hennings contributed to this article.