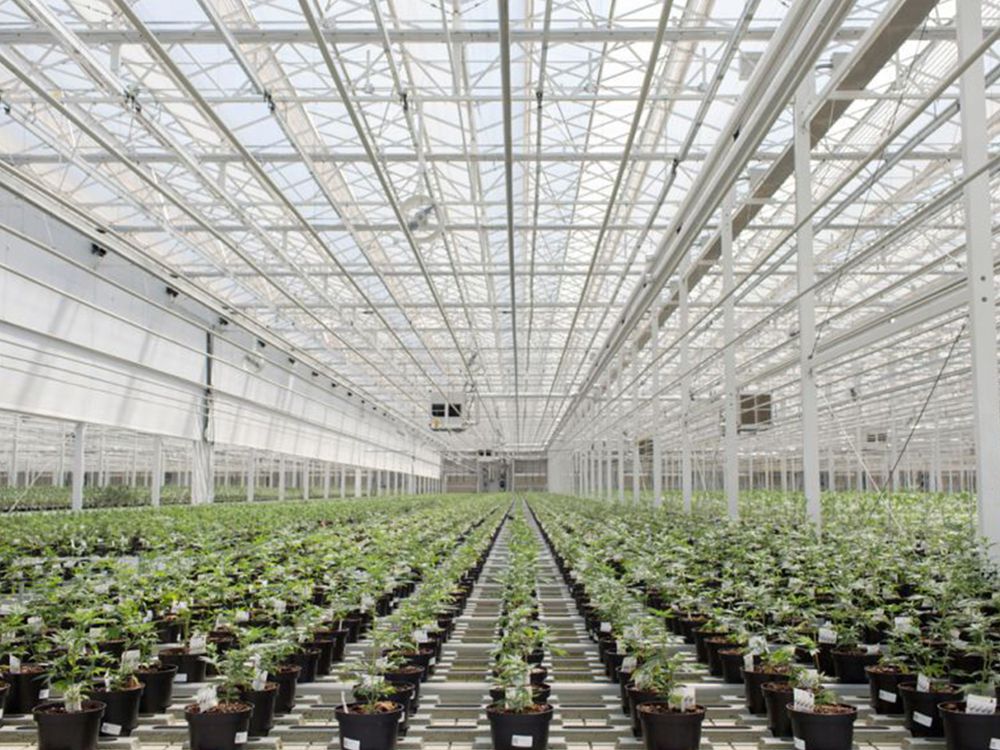 Shares of cannabis producer Aphria Inc. were trading down by more than four per cent midday Tuesday after the company slashed its 2020 fiscal year outlook and reported a decline in revenue for the quarter ending Nov. 30, 2019.

The Leamington, Ont.-based company blamed the slow retail store rollout in Ontario, a temporary ban on vape products in Alberta and the slowing growth of its cannabis distribution business in Germany — CC Pharma — for the revised full-year forecast, projecting net revenue of between $575 million and $625 million and adjusted EBITDA of between $35 million to $42 million.

In October, the company had forecast net revenue for its current fiscal year of between $650 million and $700 million, and a significantly higher adjusted EBITDA of between $88 million and $95 million.

“The biggest reason for this (revised forecast) was the impact of a lack of change in store counts in Ontario,” company CEO Irwin Simon told analysts on a Tuesday morning earnings call. “We had expected 40 additional stores in late fall 2019, but that was postponed to March, even late April 2020,” he added.

Aphria did, however, see a 46 per cent increase in recreational cannabis sales between quarters, and a nine per cent bump in overall cannabis sales, generating cannabis-only revenue of $33.7 million, compared to $30.8 million last quarter.

As a result of strong sales in the domestic cannabis market, gross margins from the quarter increased slightly to 25.3 per cent. Aphria also reported positive adjusted EBITDA of $1.9 million but posted a net loss of $7.9 million for the quarter.

Total net revenue was $120.6 million for the period ending Nov. 30, a decline of four per cent from the previous quarter and the second consecutive quarterly decline in net revenue for the company.

Aphria attributed the decline to a decrease in distribution revenue from its CC Pharma business in Germany, because of a “change in the German government’s medical reimbursement model and seasonality in CC Pharma.” Aphria’s German business generated $86.4 million this quarter, compared to $95.3 million in the quarter prior.

The company also disclosed that it had to purchase $735,000 worth of cannabis from other wholesalers to meet retail demand, as its supply capabilities were delayed because of a timing issue in receiving a licence from Health Canada for its new, 1.3-million-square-foot Aphria Diamond facility.

The purchase resulted in higher costs and less margin opportunity for those sales, Simon told analysts.

“The good thing is, we know there is more customer demand for our product than supply and we can provide that. We have a good sense from retailers and provinces as to how our brands are selling — they are selling very well and we are getting reorders on all of them,” Simon told the Financial Post over the phone.

A number of other licensed producers including Canopy Growth Corp. and Organigram Holdings Inc., have had to take write-downs from returned products — Canopy in particular took a financial hit of more than $30 million last quarter due primarily to a line of CBD-heavy soft gel capsules that simply weren’t selling well.

Aphria also reported that its average selling price per gram on the recreational market decreased this quarter from $6.02 to $5.22 as a result of a “change in sales mix”. Piling inventory and the decline in average per gram cannabis prices across the industry as a whole has been a major concern for investors of late.

On that front, Simon said he did not see the issue of commoditization and price compression as a concern for Aphria specifically, compared to other players in the industry.

Cannabis analyst and author of The BCMI Report Chris Damas took the view that Aphria’s results “look great compared to the volatility being served up by Aurora Cannabis and HEXO, and the wild spending at Canopy Growth.”

“The good news is Aphria’s famed low-cost automated greenhouse operation provided an ‘all-in’ cost of production of $1.98 per gram-equivalent so the company can still make money at this low adult-use price,” Damas said in a Tuesday morning note to subscribers.

Along with the earnings release, Aphria announced a title change for Simon from interim CEO to CEO. The former Hain Celestial Group founder was brought in to lead Aphria in December 2018 when the licensed producer was dealing with the fallout from a short-seller report alleging self-dealing amongst former executives and that the company overpaid for some of its international assets.

“Look, running a cannabis company is no walk in the park. The industry is going through a tremendous transition and billions in market cap has been lost. But I see opportunity because somebody is going to emerge as the front runner. I think Aphria will,” Simon said.