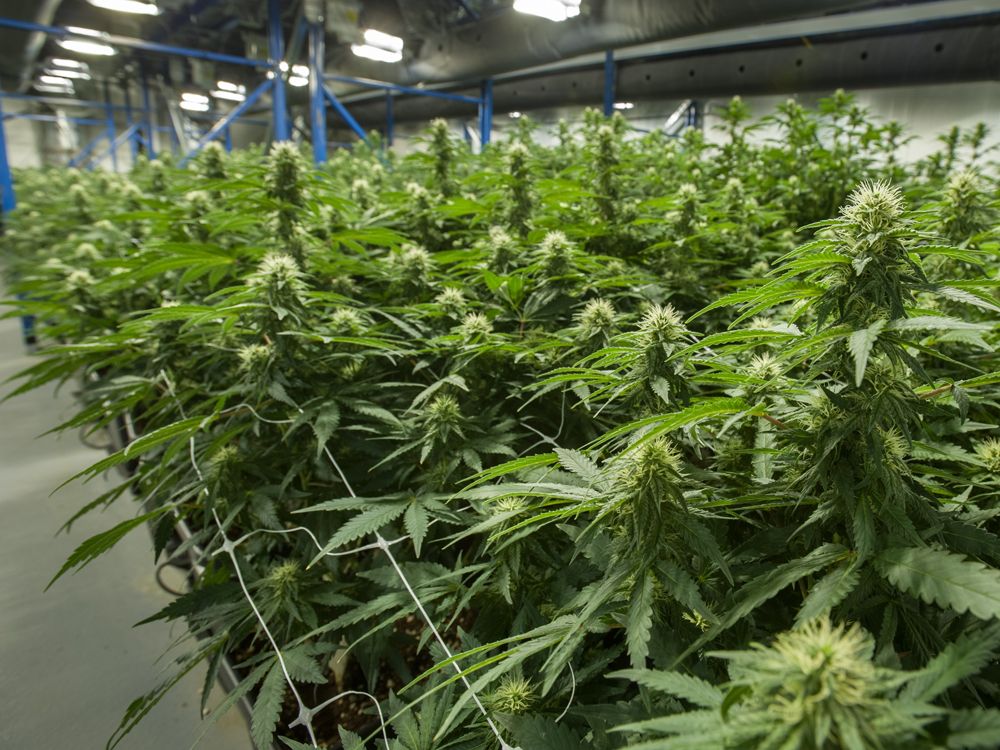 Kief. Pixie dust. Kiefer Sutherland. All are terms for the fine granules that stick to the fingers when handling cannabis buds or fall through a grinder’s sieve when breaking up weed.

Stoners covet kief because it contains a high concentration of tetrahydrocannabinol (THC), the psychoactive compound that causes a person to get high. Some of Canada’s leading cannabis producers covet it for another reason: kief has the potential to turn weed into the new wine.

The greenish-brown flecks also contain terpenes and cannabinoids, compounds that respectively elicit certain aromas of cannabis and possibly create different effects on the body. In theory, those traits could be used to sell cannabis as something more than a way to get high in the same way winemakers distinguish their products by emphasizing certain flavours or the presence of tannins on their packaging.

That’s the bet they’re making at Moncton, N.B.-based Organigram Holdings Inc., which began as a medical cannabis producer prior to recreational legalization, but is now focusing more on premium products to capture a bigger market share.

“(It’ll become) just like wine for people,” said Beena Goldenberg, chief executive of Organigram, which owns brands such as Shred and Edison Cannabis. “Nobody buys wine at the highest alcohol content for the lowest price. They buy based on the full-body flavour that they like.”

Other companies such as West Island Brands Inc. in Montreal, Organnicraft Production Inc. in Vernon, B.C. and Avant Brands Inc. in Kelowna, B.C., have also taken to labelling the levels of terpenes and cannabinoids on their packaging, targeting the seasoned toker to help pad tight margins and trump the black market.

West Island, which owns craft brands Ouest and Citoyen, in spring 2022 also began including terpene profiles on its packaging. Chief executive Boris Ziger said it’s one of the few ways producers can differentiate themselves and cultivate repeat customers.

Each marijuana cultivar produces different levels of the compounds and companies can manipulate the potency by tinkering with growing conditions, such as the amount of light a particular plant variety gets. If they’re able to increase the level of terpenes and cannabinoids, producers can charge more for the bud.

One reason for this experimentation is that the Canadian cannabis market is oversaturated and has yielded paltry returns for investors since legalization took effect in October 2018 and hundreds of companies secured licences to sell marijuana.

Currently, Health Canada lists more than 900 authorized licence holders that can cultivate, process and sell cannabis. But after an initial boom, the 10 largest companies by market cap at the time yielded a negative return of 57 per cent in the first year of legalization.

There are several reasons why the industry has suffered. For one thing, tight regulations, especially around what can be said in marketing campaigns, make it difficult for companies to convince consumers that their offerings are better than anyone else’s.

Secondly, regulatory fees and excise taxes eat into profits. And cheaper — and oftentimes, better — pot and weed-derived products, such as edibles, can be found on the black market, which continues to thrive four years after the government legalized cannabis.

Investors initially threw billions of dollars at companies, assuming there would be avid demand for legal weed since the black market was “sizable” before October 2018, said John Chu, an analyst at Fitch Ratings Inc.

Flush with cash, cannabis companies built large growing facilities, particularly one-million-square-foot greenhouses. It was less expensive than building indoor facilities, in part because you could heat the greenhouses with sunlight, while avoiding pests and inclement weather, Chu said.

But large greenhouses come with problems when trying to grow large amounts of weed, he said. The quality isn’t as good compared with producers who grow in smaller, indoor facilities, and different strains have different growing requirements, so it’s hard to get the optimal amount of sunlight, water, soil composition right inside a giant, open greenhouse.

It was an expensive undertaking and investors took a beating when sales didn’t match expectations. Miller Thomson LLP, a Toronto law firm, estimates investors have lost a combined $131 billion in the 183 publicly traded cannabis companies.

Now, producers see cultivating connoisseurs as a solution to their woes.

“As consumers become more educated, and as they experiment more, you start to understand that this isn’t only about the highest THC at the lowest price,” Goldenberg said. “(Consumers) will understand what flavours they want. Do they want a gasoline flavour? Do they want a citrus, fruity flavour? Everybody’s preferences will change.”

Terpenes are mainly responsible for the smell and flavour a given plant produces, especially when smoked, and researchers have identified more than 120 different types. For example, myrcene tends to give off an earthy, musky scent, while limonene gives off a citrusy smell and linalool has a spicy, lavender-like aroma.

Winemakers, too, emphasize particular flavours consumers can expect, such as cedar, chocolate and tobacco, or woodsmoke and baking spice undertones, though they don’t claim they enhance the buzz.

Cannabis companies and retailers, however, claim that terpenes can help enhance a high. Linalool, for example, supposedly induces a more calming effect.

Cannabinoids are the chemical substances that interact with a person’s endocannabinoid system, the network of receptors in the brain and body that helps regulate everyday functions such as sleep, memory and hunger.

One of the most well-known cannabinoids is THC. There’s also cannabidiol (CBD), the non-psychoactive compound that’s purported to help with ailments like chronic pain, seizures and anxiety.

Both compounds also occur in other plants and vegetables. For example, terpenes are what give off that characteristic tomato scent from a vine leaf. They’re also extracted from various plants to produce essential oils.

“Throughout 2021, the first value brands were introduced and there was this competition on pricing,” she said. “Throughout 2022, there’s been a mentality shift in a lot of the Canadian (licenced producers) trying to give rise to a more craft-type position, more refinement of their products.”

Companies began churning out edibles and concentrates, such as oils, vapes and topicals, when the government legalized them in 2019, focusing on ways to include different cannabinoids and flavours. Over the past two years, infused products such as pre-rolls that have concentrates like hash and cannabis resin started hitting the market.

Advertising restrictions make it difficult for companies to promote their products and educate consumers on proprietary innovations, but they still find ways to inform users about the supposed benefits of various terpenes and cannabinoids.

On one of its brand websites, Monjour, Organigram displays words such as “night time” and “bedtime” under the word “CBN,” a type of cannabinoid that marketers claim helps with difficulty in dozing off.

At retail stores, sales associates known as “budtenders” inform inquiring customers of the supposed enhancing effects terpenes can have on a user’s high. The majority of this education occurs in the brick-and-mortar shops since cannabis producers often brief budtenders on the qualities of their product as a way to circumvent marketing regulations, West Island’s Ziger said.

Fans say cannabinoids and terpenes can relieve various health issues, including insomnia and anxiety, but the science to back them up isn’t there yet. That’s because studying an illegal substance was difficult, so research is only now starting to catch up, said Borna Zlamalik, senior vice-president of research and development at Organigram.

“The clinical trial framework, the full, longitudinal studies required to prove a drug as effective takes multiple years, two to four years, to execute and millions and millions of dollars of investment that just hasn’t happened in this category,” he said.

Jamie Corroon, a licensed naturopathic doctor and postdoctoral research fellow at the University of California, San Diego, published a review of research on CBN’s effectiveness at aiding sleep. He found the research that’s been done until now is dated and lacks sufficient evidence to support claims that the compound helps a person sleep.

Studies on whether terpenes enhance a person’s high are also limited and have been mostly done on mice. Researchers continue to study the compounds, with much of the focus on CBD, which has been found to help with severe cases of epilepsy. Though it’s not available in Canada, the United States Food and Drug Administration has approved Epidiolex, the only CBD-derived medication, for seizure disorders.

“There’s a lot of things in the wellness industry that are understood to be beneficial to human health, but not enough large-scale studies have been done to get that proved,” Zlamalik said. “But it’s one of those things that I think, in a few years, those studies will catch up.”

One certainty is that terpenes bring out different flavours and aromas. Cannabis producers are increasingly featuring the percentage levels on products, hoping to cater to the base of weed aficionados looking for a flavoured high, not a cheap one, Frederico Gomes, a sector analyst at ATB Capital Markets Inc., said.

“The focus on terpenes and cannabinoids is a way that companies are trying to differentiate so they can escape the price wars,” he said.

This bud’s for you

In other words, because cannabis producers can’t market their products in a traditional sense, consumers care more about value and getting the highest they can as cheaply as they can.

William Densmore, another analyst at Fitch, said the sheer number of cannabis companies in Canada adds another degree of difficulty in winning over consumers. The impending economic downturn also doesn’t help companies that focus on premium products.

“We believe the profitability for these players is going to be difficult,” he said. “It’s very difficult to pivot your entire cultivation strategy … to grow premium products at scale and have it be consistent.”

The threat of a recession could also throw a wrench in companies’ plans to push more premium bud and related products.

“In the case of recession, consumers would rely even more on value products just for economic reasons,” Gomes said. “And because of that, we still think value is going to continue to be the main segment over the next year.”

Goldenberg said it could take a while before the casual toker turns into an aficionado since regulations limit how companies can educate consumers on their products, but she’s certain her company can bring out more cannabis connoisseurs. Already, “some of them are very specific in which terpene they like.”