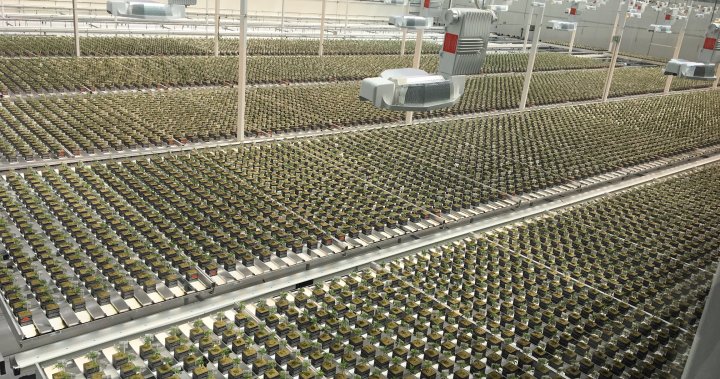 Aurora Cannabis Inc. said eight per cent of its global workforce will be impacted by the forthcoming closure of one of its Alberta facilities.

The cannabis company announced Wednesday that it is closing its Aurora Polaris property in Edmonton as part of a plan to streamline its operations.

“This decision was not taken lightly. After painstaking review and thorough consideration, we are taking the necessary steps to strengthen our core operations to meet current and future demand,” the company said in an email to The Canadian Press.

“We aspire to be a leaner, more agile organization that keeps pace with our competition and is on a path to profitability. We believe these changes are imperative for our future success.”

An Alberta government website detailing major projects in the region shows the Aurora Polaris facility was about 2,787 square meters with one-third of the space dedicated to warehousing and distribution of cannabis products and the remainder hosting product manufacturing.

The website says the property had an estimated cost of $50 million and was adjacent to an Aurora Sky facility by the Edmonton International Airport.

Aurora Polaris’ medical distribution operations will move to the Aurora Sky facility, while manufacturing will be relocated to Aurora River in Bradford, Ont.


Aurora, which is headquartered in Edmonton, will keep its corporate office in Alberta.

The changes come after the company moved the release of its fourth-quarter earnings from Sept. 21 to Sept. 27.

Analysts are not optimistic about the figures Aurora will report next week.

Bill Kirk, an analyst and executive director with MKM Partners, told investors in a Sept. 17 note that he feels Aurora has “limited prospects” to improve its position in the recreational cannabis market and is unlikely to beat profitability expectations.

He pointed out that in the 17 quarters Aurora has reported as a public company, it has missed consensus EBITDA expectations 17 times and he feels the firm will barely generate $50 million in revenue.

Cantor Fitzgerald analyst Pablo Zuanic felt similarly and said in a Sept. 16 note that his firm had cut its Aurora estimates and will not assume positive EBITDA for the company in its three-year projections.

Such concerns have long dogged Aurora, which spent much of the pandemic busy with a restructuring, layoffs and closures of several other facilities.

The Aurora Polaris closure was an extension of those efforts, the company indicated in an email.

“While we’ve made substantial progress transforming Aurora, the company continues to make tough yet responsible changes to further optimize our business,” it said.

Aurora has not been alone in making cuts.

Rivals Canopy Growth Corp. and Tilray Inc. have both worked to streamline their operations throughout the pandemic as they get a better sense of Canadian demand for cannabis.

Tilray, for example, said earlier this week that it would close a Nanaimo, B.C. office and facility.