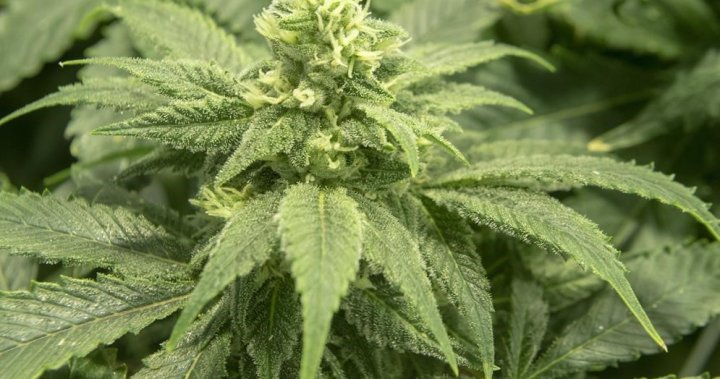 The surprise climate spending bill isn’t the only piece of marquee legislation in the U.S. Senate that’s getting a lot of Canadian attention.

U.S. lawmakers are also looking at a comprehensive effort to legalize marijuana, which the legal cannabis industry north of the border would love to see become law.

Observers aren’t holding their breath that the Cannabis Authorization and Opportunity Act, which Senate Majority Leader Chuck Schumer introduced last week, will make it that far.

But David Culver, vice-president of global government relations for Ontario-based Canopy Growth Corp., says the bill is an important milestone for other reasons.

Culver says as long as lawmakers in the U.S. are willing to keep pushing for legalization, the effort will ultimately make progress, even if it’s only a little at a time.

He says several other smaller bipartisan bills that take a piecemeal approach to legalization have far better chances of passing before the midterm elections in November.

“This is a historic piece of legislation in that this is the first of its type in the U.S. Senate,” Culver said in an interview.

“Now that this piece is out there, it frees up the Senate to really work on legislation that is bipartisan, and I do think could get done before the midterm elections.”

First and foremost is the bill known as the SAFE Banking Act, which would eliminate the tallest financial and regulatory hurdles that prevent companies operating in states where cannabis is legal from expanding into national markets.

Introduced in the House of Representatives in 2019, the SAFE (Secure and Fair Enforcement) Act would allow banks, credit unions and other institutions to provide financial services to cannabis operations without running afoul of federal rules.

Another bill aimed at slashing financial penalties and red tape, the Capital Lending and Investment for Marijuana Businesses Act, or CLIMB, would cover a broader array of service providers, including management consultants, insurers, advertising firms and IT companies, and also allow cannabis companies to join U.S. securities exchanges.

Congress is also exploring ways to allow the U.S. Small Business Administration to provide equity loans and other federal support to companies operating in legalized state markets, as well as new laws to allow military veterans to use cannabis to treat PTSD symptoms without facing the prospect of losing their federal benefits.

“If they were to do it right, I could see them taking the results of the commission and using that going into 2024, to act on more comprehensive reform,” Culver said.

Schumer’s broader legislation, drafted with fellow Democrats Sen. Cory Booker (D-N.J.) and Sen. Ron Wyden (D-Ore.), would check a number of those boxes, but also go farther, removing marijuana from the Schedule 1 list of banned substances deemed to have no medicinal value and a high risk of abuse, including heroin, LSD and magic mushrooms.

“I think it makes a great deal of sense to do it.”

A comprehensive approach would also allow lawmakers to address some of the potential risks of legalization, Culver said, by introducing a detailed, multi-pronged strategy to keep cannabis out of the hands of young people.

“We need to go above and beyond in terms of traffic safety, making sure that youth cannot access cannabis, we age-gate it properly and that we market and advertise it in the most responsible way,” he said.

“Until we tackle those issues, you’re just not going to get a comfort level with Republicans, and the bill does a solid job there on the responsibility side.”

It would also create a federal regulatory and tax framework for legalized sales, and place responsibility for overseeing the legal landscape with the U.S. Food and Drug Administration _ two areas where Culver said he wishes Congress would learn a lesson from Canada.

North of the border, he said, Canada made similar mistakes, saddling producers and retailers with a cumbersome regulatory framework and tax rates he and other critics say are too high to keep the illegal cannabis market at bay.

“Until you set a tax rate that’s low enough for the legal market to compete with the illegal one, then you’re never going to eliminate the illicit market. That’s just simple economics.”

But Schumer’s bill isn’t likely to get through Congress intact, and even if it did, it’s an open question whether President Joe Biden _ who paid lip service to decriminalization during the 2020 election campaign, but has since gone largely mum _ would sign it.

Biden has said recently that his administration is still keen on following through on a campaign promise to pursue expungements for people convicted of marijuana offences.

“I don’t think anyone should be in prison for the use of marijuana,” Biden said in response to a shouted question as he arrived back at the White House two weeks ago.

Asked last week to elaborate, press secretary Karine Jean-Pierre said the president has so far commuted 75 sentences and issued three pardons for non-violent drug offences, more at this stage of his term in office than any of his five most recent predecessors.

“He continues to evaluate further uses of clemency powers,” Jean-Pierre said. “We just don’t have any additional announcement to make at this time. But I can tell you that’s what he’s been doing during his administration.”