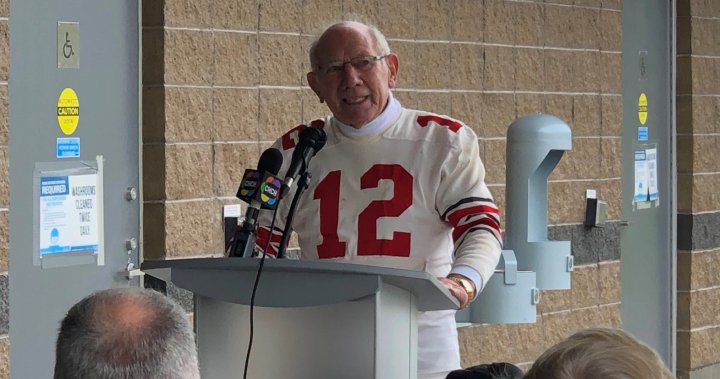 However, it was at a ribbon-cutting event on a chilly morning in his hometown of Hamilton that had the 85-year-old football icon fighting back tears of joy as he reflected on his life achievements.

Jackson, alongside his wife Lois, CFL Commissioner Randy Ambrosie, Hamilton Mayor Fred Eisenberger and a host of other dignitaries, cut the ribbon on the Russ Jackson Football Field Saturday morning.

The legendary Ottawa Rough Riders quarterback says it is a wonderful tribute after what he accomplished on and off the field.

“It’s great to be honoured in this way, especially right here in Hamilton,” said an emotional Jackson, who shared the moment with dozens of family, friends, former teammates and local politicians.

“Both my wife and I, we lived and worked here and went to school here, and coming back and being honoured like this is really special,” Jackson added.

Jackson recalled having to convince his father to allow him to play football at Hamilton’s Westdale High School and how he wanted to play offensive end (now called tight end) before his junior team coach convinced him to become the quarterback.

Jackson starred for the McMaster Marauders football and basketball teams and graduated in 1958 with a Bachelor of Science degree in Mathematics, but instead of pursuing a Rhodes Scholarship he entered the 1958 CFL Draft and was selected sixth overall by the Ottawa Rough Riders.

The rest, as they say, is history.

The Rough Riders, with Jackson at the helm, finished 6-8 and made the playoffs in his first season and knocked off Montreal in the East Division semifinal before losing to the Hamilton Tiger-Cats in a two-game, total point division final.

Jackson was named the Interprovincial Rugby Football Union’s (now the East Division) rookie of the year and a star was born.

Jackson was inducted into the Canadian Football Hall of Fame in 1973 and is regarded as the greatest Canadian quarterback in league history.

Off the field, Jackson was a math teacher in Ottawa and later became the principal and vice-principal at a number of high schools in the nation’s capital and in Mississauga and Brampton, Ont.

He also spent time as a colour commentator on football broadcasts for CBC Television and 900 CHML‘s radio broadcasts of Hamilton Tiger-Cats games.

in 1986, Jackson was honoured with the creation of the Russ Jackson Award which is presented to the Canadian university football players who best exhibit athletic ability, academic achievement and citizenship.

Jackson says he’s glad to know that generations of children will be able to enjoy the field.

“I just want it to be someplace that the kids have an opportunity to play, to grow, to be able to come here and play football and just enjoy life. That’s what it’s all about.”