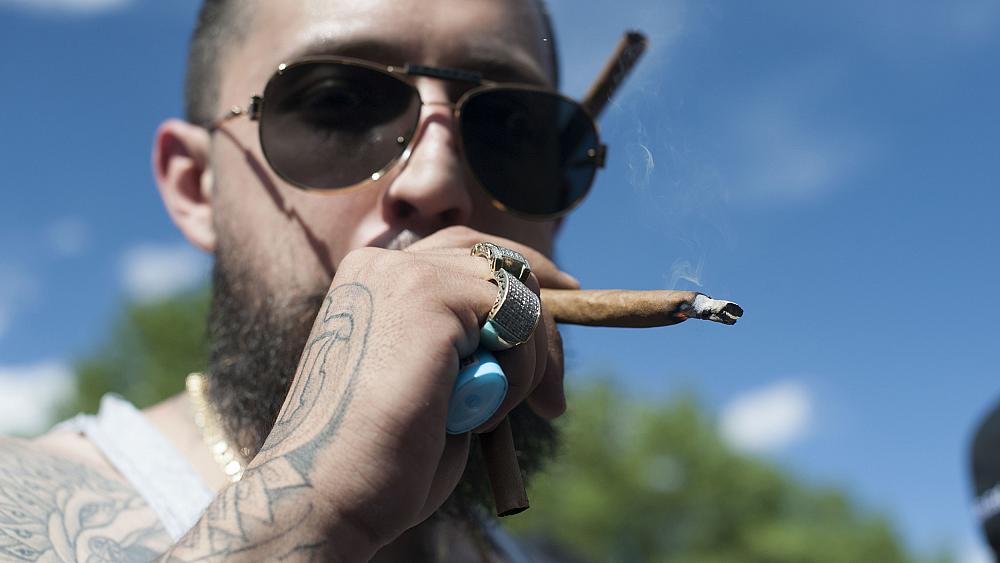 As the nation grapples with an opioid crisis that kills more than 130 people every day, Colorado thinks a solution may lie in a joint … or a vape pen … or a topical.

On Friday it becomes the third state in the nation after New York and Illinois to allow doctors to recommend medical marijuana for any condition for which they would prescribe an opioid.

In two other states, Pennsylvania and New Jersey, patients diagnosed with opioid use disorder may be advised to use medical marijuana instead of opioids.

“It was designed to give physicians a legal, open option to discuss [medical marijuana use] with patients,” said Colorado Rep. Edie Hooton, who co-sponsored the bill. “It normalizes the conversation around the issue.”

Research does not yet categorically support the idea that medical cannabis can replace opioids or reduce opioid dependence or overdose.

Last year, the Minnesota Department of Health released the results of its study of 2,245 patients taking medical marijuana for “intractable pain,” which is chronic. (The Colorado bill focuses on acute pain.) Of the 353 patients who self-reported that they were using opioids when they began consuming medical marijuana, 63 percent had reduced or eliminated their opioid use after six months.

But another 2018 study published in the Journal of Addiction Medicine found the opposite — that medical marijuana users “were significantly more likely to report medical use of prescription drugs in the past 12 months.”

“The science for this is really in its infancy, and policy is far outpacing what we know based on evidence,” said Ziva Cooper, research director at the UCLA Cannabis Research Initiative. “We’re very far from coming up with a conclusive statement saying cannabis can be helpful as a substitute for opioids based on controlled studies.”

Much of the excitement surrounding the potential for cannabis to reduce opioid-related deaths originated with a 2014 study published in JAMA Internal Medicine, which found that between 1999 and 2010, states with medical cannabis laws saw close to a 25% reduction in opioid overdose deaths.

Those results were recently challenged when a new study expanded the original analysis through 2017 and found that states with medical cannabis laws had a nearly 23% increase in overdose deaths.

“Cannabinoids have demonstrated therapeutic benefits, but reducing population-level opioid overdose mortality does not appear to be among them,” the authors concluded.

One of the researchers went so far as to say, in a JAMA editorial published several months before the new study, “substituting cannabis for opioid addiction treatments is potentially harmful” and that the recommendation for substituting medical cannabis for opioids does not “meet the standards of rigour desirable for medical treatment decisions.”

Yet state lawmakers said there’s enough promising evidence to support opening up a dialogue between physicians and patients about options when it comes to acute pain.

“We want to give folks a legitimate alternative,” said Amanda Bent, former policy manager with the Colorado office of the Drug Policy Alliance, which supported Colorado’s legislation.

Hooton said the bipartisan bill was never “about treating opioid addiction.” Yet others openly promoted it as a way to curb opioid use and overdose fatalities, which lines up with its portrayal in other states.

Illinois launched its Opioid Alternative Pilot Program in January and has 2,000 active patients. The state’s broader medical cannabis program has had 77,000 patients register since 2013.

“This program was developed in order to offer patients an alternative to manage their pain condition with a long-term goal that the program would reduce overall opioid deaths in Illinois,” said Conny Mueller Moody, deputy director for the Office of Health Promotion at the Illinois Department of Public Health.

The three states that do allow medical marijuana as a replacement for opioids cover minors, too. (Colorado’s new law limits minors to consuming medical marijuana in a non-smokeable form while on school grounds, on school buses or at school-sponsored events).

The opioid mortality rate for children and adolescents grew by 286% from 1999 to 2016, a period in which close to 9,000 minors died from opioid overdose.

Dr. Christopher Rogers, medical director for child and adolescent services at the Medical Center of Aurora in Colorado, said research on marijuana use in adolescents is limited and often conflicting. But it points to some serious potential side effects, he said, including an increase in the likelihood of developing depression and suicidal thoughts and a negative impact on cognitive performance.

“I would be very hesitant to recommend marijuana as a medicine for kids unless they’re exceedingly debilitated … ,” Rogers said. “I don’t dislike marijuana as a general rule; I just don’t think it’s appropriate for kids any more than a martini will really help you with that sprained ankle.

Supporters argue that marijuana has a reduced risk of addiction when compared to opioids and does not produce debilitating withdrawal symptoms.

“We’ve seen tens of thousands of deaths from opiates,” said Karen O’Keefe, director of state policies at the Marijuana Policy Project. “Any alternative you have to give patients options that don’t produce fatal overdoses and does treat pain, it’s a win-win.”

Recreational marijuana is legal in 11 states and Washington, D.C., and medical marijuana in 33 states. Yet no other states appear to be moving in the direction of Colorado, Illinois and New York in the near future.

“With time, and as we continue to face very real concerns about the opioid crisis, and policymakers are continuously held to account on that,” Bent said, “I think it will push more implementation of this law.”