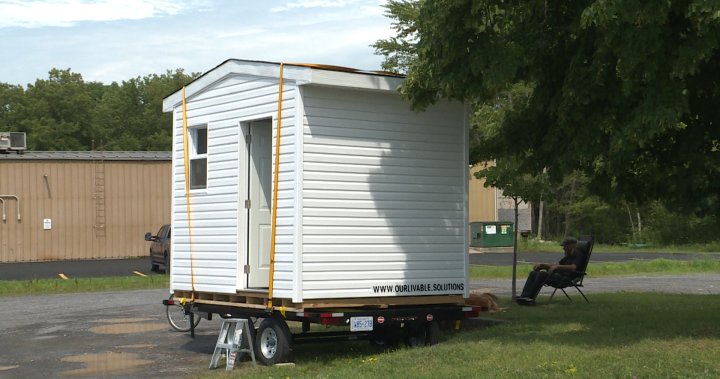 Initiatives to support the homeless community during the upcoming winter months were brought to Kingston city council Tuesday night, and prompted a lot of community response.

Most questions centred on a proposal to install sleeping cabins at the Portsmouth Olympic Harbour.

Last week, Mayor Bryan Paterson told Global News that the harbour site is being considered for a grouping of 10 cabins. The idea was first proposed to council this year by the community group Our Livable Solutions, who have based their plans for a sleeping cabin community off of Kitchener’s “A Better Tent City” initiative.

“We believe we can set people up for success by having small communities of residents living together and supporting each other, and being supported, while staying safe and warm in their own cabins,” said Letitia Flett of Our Livable Solutions at council Tuesday.

The city plans to partner with the community group to pay for the cabins to be set up and run from December 2021 to April 2022 at the harbour site.

Chrystal Wilson, a local homeless advocate, has been pushing for homes for the homeless over the last two years and is a big proponent of the sleeping cabin solution.

“We are trying to put the most vulnerable Kingstonians, people who are our citizens, into somewhere safe to keep them safe through the winter because they will die if we leave them on the streets,” she said to council Tuesday.

Currently, the city is dealing with a COVID-19 outbreak among the unhoused population, one that started at the Integrated Care Hub, which serves the region’s most vulnerable populations, but has since spread to others among the homeless population.

Despite the support from housing advocates, some needed more answers about the proposed initiative.

Carolyn Barnett, a Portsmouth resident for 26 years, spoke to council on behalf of fellow community members who had questions regarding the proposal.

She asked why there had been no community consultation on the location of the project, which will cost the city $250,000.

“Most of us heard of the project through the CKWS News when the mayor made the announcement that Portsmouth Olympic Harbour had been selected as the site for a pilot project,” she said.


While Barnett is requesting formal written responses to the communities questions and a community meeting, fellow resident Andrew McCann spoke supporting the initiative. Both he and Barnett were part of a group of around 30 local residents who met Sunday prior to the council meeting to discuss the sleeping cabins.

Despite Barnett’s concerns, McCann argued that most residents were in favour of the proposal.

“I think most people there came around to the idea that the greater concern was that, on the edge of winter, we actually need to act now and move ahead and not defer this and make a decision tonight to put these cabins in there,” he said.

Council did not vote on whether to approve the sleeping cabin initiative Tuesday night, running out of time for that discussion. The matter will be dealt with at a continuation of the meeting Wednesday night.