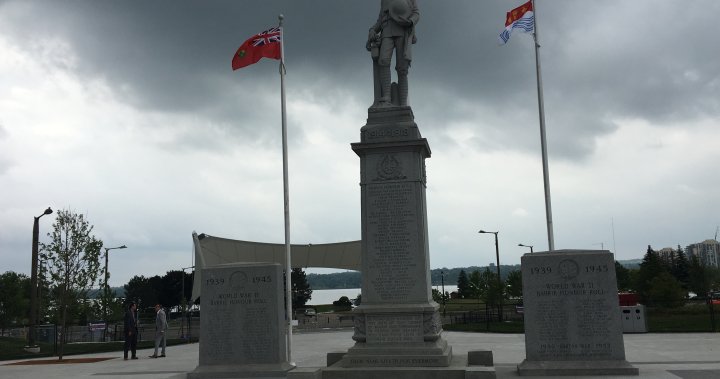 To honour those who have served our county, communities across Simcoe County will be holding ceremonies to commemorate Remembrance Day.

In Barrie, the local branch Royal Canadian Legion and the city invite the public to visit the Remembrance Day Vigil at Memorial Square between 7 p.m. and midnight on Thursday, Nov. 10, and from 6 a.m. to 8 a.m. on Friday, Nov. 11.

Five cadets in rotating shifts will stand vigil at the Cenotaph in honour of Canada’s veterans.

The city also invites the public to participate in the Remembrance Day Parade and Ceremony on Friday at 10 a.m.

The parade will start along Dunlop Street at Mulcaster and march to the Five Points intersection halting in front of the Cenotaph in Memorial Square for the ceremony.

The Mulcaster Street intersection will also be temporarily closed by police to facilitate the movement of the parade toward Meridian Square.

During the ceremony, blank gunfire will be fired as part of a rifle salute, there will be two minutes of silence at 11 a.m., followed by the ceremony and laying of wreaths.

People or businesses wanting to lay a wreath at the Memorial Square Cenotaph are asked to contact the legion.

Those wanting to keep their wreaths are asked to pick them up before all are removed on the following Tuesday at 4 p.m.

The city is also honouring Barrie’s fallen soldiers by featuring pictures of local veterans on flags temporarily displayed throughout Meridian Place and around the entire waterfront to Tiffin St.

City staff have said 24 new flags were added to the series this year.

Those in Innisfil wanting to commemorate the day can attend a ceremony at Innisfil Town Hall at 2101 Innisfil Beach Road on Friday, Nov. 11, at 10:50 a.m.

“We invite all members of the community to join us as we gather for Remembrance Day services at Town Hall and other locations in Innisfil,” says mayor Lynn Dollin.

“I hope all residents will take a moment to pause and honour the service, courage and sacrifice of our veterans and current members of the Canadian Forces.”

The Innisfil staff say the service provides an opportunity for residents to pause and reflect on the role that Innisfil’s citizens played in protecting and preserving Canada’s freedoms in times of war, conflict and peace.