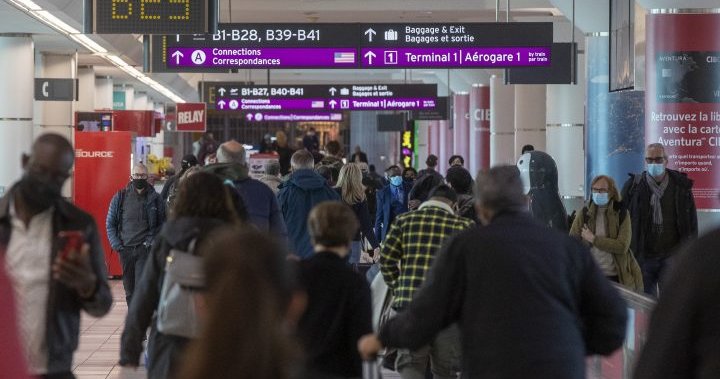 Canada’s new airline rules now compel airlines to make sure passengers get where they’re going: within 48 hours, they must agree to issue refunds.

But the additional regulations, born out of frustrations over how airlines treated customers at the start of the pandemic, won’t help an Ottawa couple and others.

“Two and a half years later we’re trying to get our money back for something we were never given, never utilized, because of the pandemic,” said Shawn Allenby.

Allenby, his wife, Debbie, and their children were scheduled to take an all-inclusive sun vacation with their two children.

But on March 13, 2020, the Allenby family say they obeyed the direction of federal and public health officials not to travel for non-essential purposes internationally.

“We were hearing from everybody, all the authorities, not to travel, to stay home,” said Debbie, in a television interview with Global News.

The couple say they repeatedly tried to get through to their travel agency and the airline to inform the airline that they were heeding public health advice — but couldn’t through jammed phone lines.

Air Transat considered them a no-show and cancelled the trip without providing a credit or a refund.

Since then, they have written letters to their travel agency, credit card company, their Member of Parliament, the Prime Minister, and others to make their case.

Stories like theirs were common at the beginning of the pandemic.

“The pressure from the public was overwhelming. It’s no fault of the consumer that there’s a pandemic,” said John Lawford, executive director of the Public Interest Advocacy Centre based in Ottawa.

The new federal rules, which took effect Sept. 8, require airlines to issue a full refund for cancellations and delays if passengers cannot be placed on a new flight within 48 hours.

“Passengers have flights and they need to be respected,” said Transport Minister Omar Alghabra in a statement last week.

“No other western country would have something so absurd,” Lukacs said, saying that rules in the United States, Israel and Turkey all require refunds no matter the reason for the cancellation or delay.

Even so, Canadian airlines oppose the new requirements.

“Airlines are attacking the whole regime in court, they’re trying to throw the whole thing out,” said Lawford.

The new rules do nothing to boost existing compensation for travellers whose luggage has been delayed or lost, a problem that plagued thousands of Canadian travellers this summer.

Teresa Visic of Toronto travelled with her family from Toronto to Croatia aboard Air Canada and a Star Alliance partner. On the return trip, their luggage was stuck in Dublin.

“For 11 days,” said Visic, who first contacted Global News in August. At the time, she was aware the family’s six bags were in Dublin because they were fitted with Air Tags, allowing her to see their location remotely. She says Air Canada claimed it was unaware of the location of the suitcases.

Eventually, the bags made it to Toronto.

Visic says Air Canada didn’t even offer a refund for the baggage fees they charged, only a credit voucher.

“I don’t want a credit,” she said, estimating she spent hours on the phone and writing emails trying to get the luggage located and returned.

Air Canada later agreed to pay back the fees but told Visic it might take 12 weeks to receive a refund.

In the Allenby’s case, Air Transat told Global News its records indicate the couple never asked for a reimbursement.

“We are always open to talk with our customers, and regrettably this can take more time these days than it did pre-pandemic, but we unfortunately do not discuss their concerns via media,” said Bernard Cote, director of marketing, public relations and social media for Transat.

But on April 4, when Global News first contacted Transat to see why the Allenby family had not been refunded, the company said “the requests were denied because our policy at the time did not allow it.”

Cote added that “she (Debbie) would have been entitled to a refund under our government funding agreement which we announced on April 29, 2021.”

Debbie Allenby, who with her husband welcomes the new rules, says the effort to get a refund or credit has been frustrating.

“It’s been a long and frustrating, time-consuming, energy-consuming fiasco.”