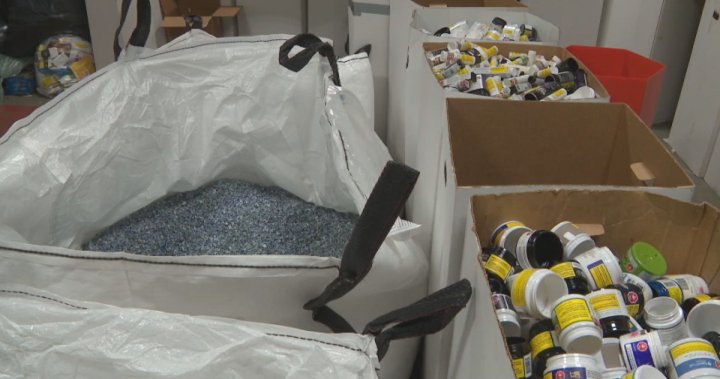 Ever since cannabis was legalized, there’s been a lingering question over what to do with all the pot packaging. An Edmonton startup has sorted out the plastic problem and is now profiting from it.

In less than two years [Re] Waste has spinned low-end plastic into a lucrative business.

It all started in the garage of Corey Saban, the founder and CEO of [Re] Waste. Now the business operates out of a large warehouse next to the Edmonton International Airport.

Saban’s plastic recycling business found so much success so quickly primarily thanks to cannabis containers.

“Customers would take the cannabis containers back to the retail stores and we would collect all of those containers on a monthly basis,” Saban said.

Saban credits the cannabis consumers for being avid recyclers.

“At such a young industry there’s an opportunity to promote change and the consumers are the ones driving these programs. They know that the cannabis containers have a lot of plastic that’s just wasted,” Saban said.

Believe it or not, cannabis containers won’t get recycled if you put them in your blue bag at home — just like a lot of plastic items.

“I think the misconception of a recycling program is anything you put in your blue bag will be recycled. As much as we like to think that, we call that wish cycling — it just doesn’t happen. ”

He said the City of Edmonton isn’t going to spend the time or money sorting contaminated or inconsistent plastics to sell to a market with no buyer. That’s where [Re] Waste comes in.

“We sort the plastic, we process it and then we are able to manufacture new products that we’re able to sell,” Saban said.

He said the city will sort plastics based on commodity value.

“So they’re only going to invest in spending the time and resources to pull plastics out that they can bail and sell. When you look at the plastic processors that produce recycled pellets, they want to buy a very consistent feed stock because their end market are the mass manufacturers that need very consistent plastic material.”

[Re] Waste is helping large companies put their low-value wasted plastics to use, by manufacturing 100 per cent of the recycled cannabis plastic into new products like “cannabins” (plastic bins), shelving units, concrete and more.

“Often times the plastic container would just go to landfill — which is much cheaper of an option — but that’s where companies are investing in better programs to support their goals.”

So far the [Re] Waste startup has diverted 100,000 containers from landfills and Saban is making money from the recycling venture, creating a circular economy in the cannabis business.