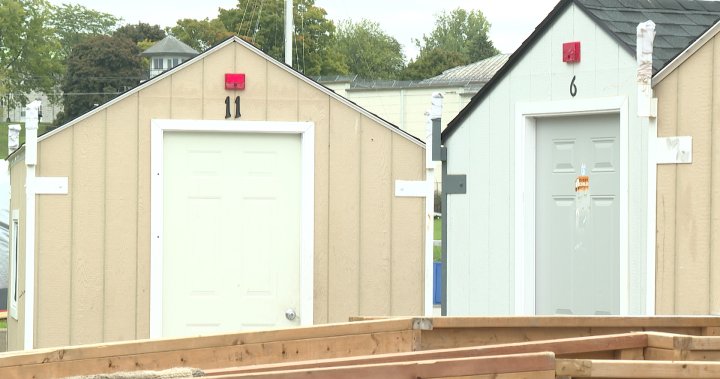 Sleeping cabins that are part of a municipal pilot project in Kingston, Ont., are on the move for the second time in less than a year.

The 10 cabins that provide shelter for individuals experiencing homelessness in the city were initially located at Portsmouth Olympic Harbour last December when the program got under way.

The cabins were relocated to the city-owned Centre 70 property in the spring when regular use of the Portsmouth Olympic Harbour started up again for the summer season.

Mark Sousa is the care coordinator for the project and says the program is making a difference.

“I personally was homeless for about a year myself and I had a lot of help in the community,” said Sousa.

The program isn’t intended to be a permanent solution to the housing issues Kingston and many other communities are facing according to Heather Scrannage, the municipality’s manager of housing and homelessness.

“It’s a model of interim emergency housing and it’s meant to provide a rapid response to our increased prevalence of homelessness in our community,” said Scrannage.

Since the projects implementation city staff have been looking for a permanent location for the sleeping cabins but that solution so far, has been elusive.

“We continue to work towards that and part of that work is to engage with broader community about the proposed locations,” Scrannage told Global Kingston.

The cabins will remain at Portsmouth Olympic Harbour until March 2023.