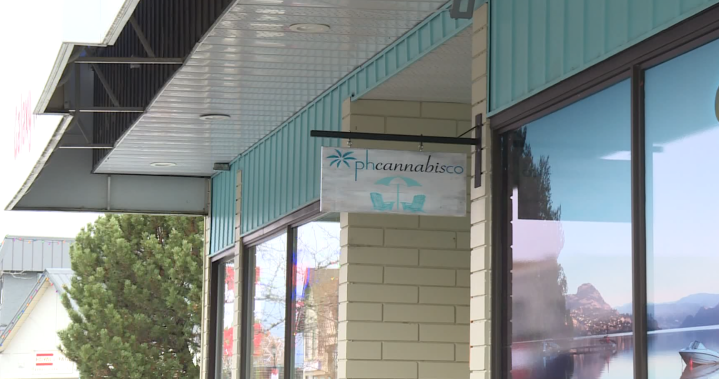 The owners of PH Cannabis Co in Summerland, B.C.,  have put their shop up for sale, just two years after opening.

Global News first spoke to Chris and Elaine Nuessler in 2014 when they were advocating for their granddaughter Kyla, who was in need of CBD to control her seizures.

“She was two years old, and that was nine years ago that she failed all pharmaceutical drugs for a very severe case of epilepsy. We were watching her really disintegrate and she was having about 200 seizures a day,” said Elaine at the time.

“That led us to start investigating cannabis through the U.S. because primarily they were already light-years ahead of us.”

‘There’s a lot to talk about:’ Indigenous gathering to discuss Cannabis Act in Vernon, B.C.

Elaine first opened a space dedicated to consultations and introducing people to CBD products before deciding to open a cannabis shop.

“It took two years to open PH Cannabis. We had to rent the space for two years, we had to invest funds to ensure that we had this space and yet we had no idea whether we’d get an actual license,” said Elaine.

The cost of opening as a private retailer came with a hefty price tag, on top of strict storefront regulations.

Elaine said opening their bank account for the business cost $2,500.

“They equate it to alcohol and yet there’s all sorts of regulations and restrictions that we have compared to alcohol,” said Chris. “We have to cover our windows still, because you know, these kids see products internally.”

Elaine added that they’ve faced many setbacks in the cannabis industry.

“Many different things are in place that are difficult to explain. It just makes the process very, very difficult. Now, they have improved things a little,” she said.

“It’s really very frustrating for us where we didn’t get product many weeks back,” said Chris. “Some cannabis stores actually shut down, we just reduced our hours.”

Elaine added, that the black market has only continued to bloom in the Okanagan.

“In the Okanagan Valley you are fighting a huge black market, really much more here than you would see in the Vancouver area or a heavier market area,” said Elaine.

“We came from an illegal world, now we need to go forward and (the provincial government) told us at the beginning, we’re going to really work on the black market, and we’ve seen no support in that regard whatsoever.”

In 2018, the federal government legalized non-medicinal cannabis moving enforcement responsibility to the province.

The Community Safety Unit, a branch of the ministry of public safety and solicitor general, is responsible for enforcing the province’s cannabis laws.

Global Okanagan reached out to the ministry for more information.

Meanwhile, the Nuesslers have joined a class-action suit against the provincial government for allowing some shops to operate with impunity.

Now both nearing their 70s, they’ve decided it’s time to move on from the cannabis business.

“We just wanted to come in and support our wonderful community and our amazing clients who support us and we will continue to do that until we find a like-minded person, probably 20 years younger than us,” Elaine said.

“I myself, feel the age and advocating is very hard work.”