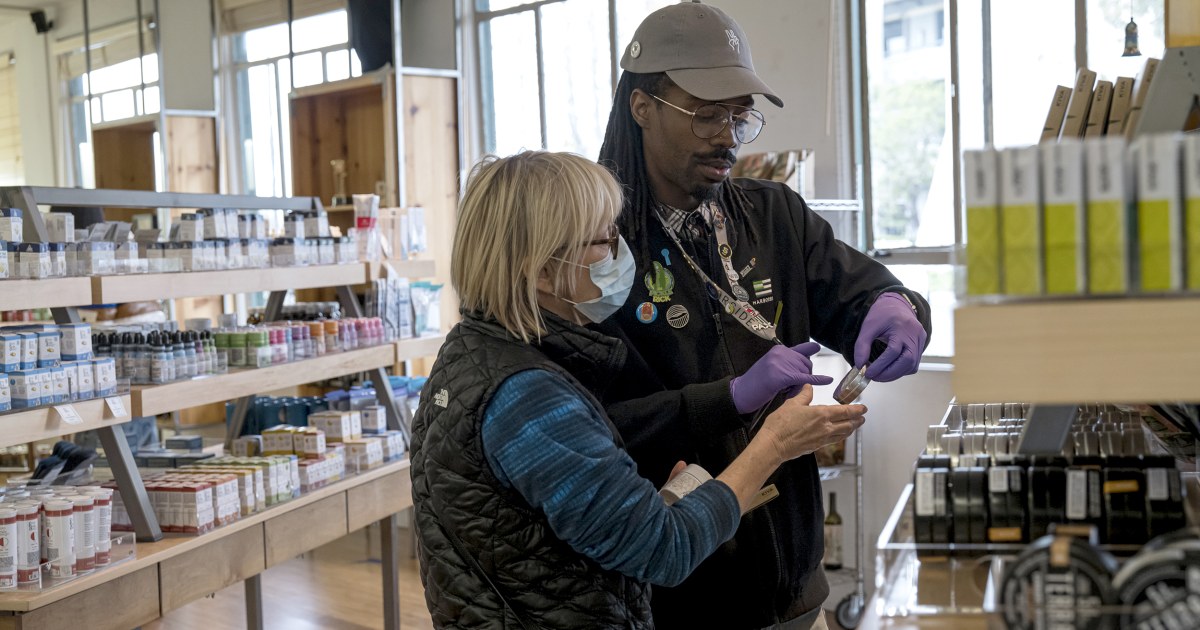 Wanda James sold more cannabis two weeks ago than she usually does on April 20 — the day many marijuana users have come to consider their holiday — after Denver’s mayor announced that recreational cannabis shops like hers would have to shut down to help slow the spread of the coronavirus.

“There was a huge rush. It felt like people were starting to hoard,” said James, who opened her shop, Simply Pure, in 2016. “Everyone was buying cannabis and toilet paper.”

But since Mayor Michael Hancock quickly reversed himself and exempted the stores because they were getting swarmed by anxious customers, causing long lines that violated social distancing guidelines, her sales have fallen off a cliff. She hasn’t been able to get a delivery license from the state yet, and customers, who might be getting laid off and spending more judiciously, aren’t coming through the doors.

Now, with additional social distancing measures in place statewide that require businesses to cut staff by at least 50 percent, she’s had to lay off employees and is asking her landlord for a temporary cut in rent.

James says her store should have the same opportunities for federal financial relief that other small businesses are getting to help them through the crisis, such as the $350 billion small-business loan program that Congress passed late last month.

But her shop and others in the 34 states that have legalized medical or recreational marijuana can’t qualify for the assistance because the federal government still considers their product illegal. The problem is compounded by their inability to get loans because banks are afraid to violate federal law by doing business with them. They can’t even take federal tax deductions for expenses as other businesses do because of cannabis’ illegal classification.

The industry has been among the fastest growing in the U.S., accounting for about 243,000 jobs and $13 billion in sales last year, according to cannabis industry figures. But it is facing a potentially crippling financial crisis as it grapples with how to get products to customers amid and with fears about a possible slowdown in private investment, the industry’s traditional source of funding, because of the pandemic.

“Like all consumer goods cannabis sales have been on a wild ride these last six weeks, with panicked buying, business operations changes, and state travel and store restrictions,” said Liz Connors, director of analytics at Headset, a cannabis market research company.

After sales increased to twice there normal levels in mid-March, most states have seen those numbers taper off, Connors said, with some, like Colorado and Nevada — which are heavily reliant on tourism — seeing a dramatic declines that pushed sales into the negative compared to the same time last year.

While legislation moving through Congress would ease funding problems and legalize marijuana, industry players are uncertain whether the pandemic will be the catalyst to get the bills passed.

“We’re hoping that common sense prevails here,” James said. “Even though the federal government wants to deem us illegal in nature, I think everyone knows we aren’t running an illegal business.”

Full coverage of the coronavirus outbreak

Steven Davenport, the founder of the cannabis market research firm Aperture and a policy analyst at the Rand Corp., said the pandemic is only going to add to the struggles of smaller cannabis businesses that can’t quickly switch to delivery or curbside sales — possibly forcing them to close permanently.

“Small businesses who can’t afford to endure longer periods of low prices or disruptions in revenues will probably look to be acquired in order to preserve their financial health,” Davenport said.

Brandon Pollock, co-owner and CEO of Theory Wellness in Great Barrington, Massachusetts, said he isn’t sure how long his business can endure.

While two of his stores have been able to stay open selling cannabis to medical customers, recreational sales, which make up about 90 percent of his business, were deemed nonessential by Republican Gov. Charlie Baker.

“Every company in Massachusetts right now has an uncertain future,” Pollock said. “It’s very scary to think about, because no one can afford to continue to operate a business without revenue.”

To save money, he and his business partners stopped taking salaries and furloughed more than half of their 200-person staff. While Pollock said federal assistance would help his business stay afloat, he doesn’t think the U.S. government will go there; so, with other cannabis businesses, he’s lobbying the governor to exempt recreational sales from the stay-at-home order.

Businesses are also seeking help from their state governments in other parts of the country where the sale of recreational marijuana is considered essential. Crystal Oliver, executive director of the Washington Sungrowers Industry Association, which represents nearly 50 mainly small, independent marijuana businesses, has been meeting with state officials to see whether there’s anything they can do.

“It seems like money could be freed up or made available to help support us during this time, especially because other businesses are going to have their needs met by the federal government,” Oliver said.

Even bigger players in the industry are feeling squeezed. Because marijuana is a controlled substance under federal law, those businesses can’t get access to federal loans, and banks, which are overseen by the federal government, are skittish about doing business with them. As a result, cannabis businesses often fund their operations with venture capital, which might not be so forthcoming in an economic downturn.

Kris Krane, president of 4Front Ventures, a cannabis company with retail operations in eight states, hasn’t had to lay off any of his 700 employees, but he is concerned about raising capital. Over the past year, finding private investors has been challenging, he said, and he believes it won’t get any easier during the coronavirus crisis and its aftermath.

“If we could access just regular lines of credit from banks and lending institutions, it’d be a game changer for the entire industry,” Krane said.

Justin Strekal, political director of the National Organization for the Reform of Marijuana Laws, commonly known as NORML, also thinks the lack of investment would have catastrophic consequences.

“As a result of federal prohibition, this industry receives discriminatory treatment like no other sector of the economy,” he said.

Congress is considering legislation that advocates say could resolve the issues. One bill, which has passed the House, would bar federal regulators from penalizing banks that work with marijuana-related businesses, while others would legalize the drug and prohibit the Small Business Administration from declining to provide them business loans.

Rep. Ed Perlmutter, D-Colo., the sponsor of the banking-related measure, said the bill would help these businesses survive the crisis, adding that while most cannabis dispensaries have been deemed essential during the pandemic, he’s talked to numerous shops that have had their supply chains disrupted by the outbreak.

“The SAFE Banking Act is about reducing the public safety risk for these businesses and our communities and would ensure these legal businesses and their employees can access financial assistance during this crisis,” he said.

A spokesperson for the lawmaker also said he “continues to look for ways to provide support for cannabis businesses and their employees in future relief packages” being considered by Congress.

It’s unclear to industry advocates whether any of the bills will gain traction given the slew of other problems lawmakers and the Trump administration are dealing with as they try to fight the coronavirus and minimize its economic damage.

Michael Wheeler, vice president of policy initiatives for Flow Kana, a major industry player, says the time is ripe for action. It’s important that all industries have the opportunity to grow following the crisis, he said, adding that lawmakers “know exactly what it is that’s limiting the cannabis industry from growing.”