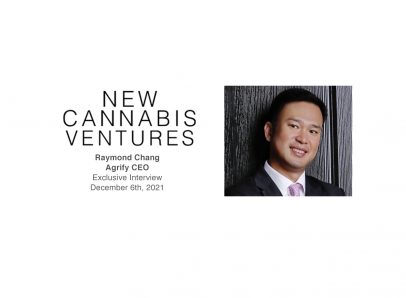 Agrify Corporation (NASDAQ: AGFY) provides grow solutions designed to give the cannabis industry consistency, quality and return on investment. CEO Raymond Chang last spoke to New Cannabis Ventures about the company in June. Since then, the company has exited its third quarter with approximately $117 million in bookings, and it looks to continue strong growth into 2022. Chang checked in to discuss Agrify’s recent M&A, 2021 guidance and what comes next for the company. The audio of the entire conversation is available at the end of this written summary.

In preparation for further growth, Agrify has strengthened its leadership team with new talent. Thomas Massie has joined the company as COO and President, and Tim Oakes has joined as CFO. Both new operational team members previously served as board members, making them already familiar with Agrify. Having people who know the company and who have strong professional track records will prepare the company for the explosive growth ahead, according to Chang.

This fall, Agrify acquired Precision Extraction Solutions and Cascade Sciences to add extraction to its serving offerings, the central element of cannabis 2.0 products, according to Chang. Agrify is aiming to be a total end-to-end solution provider for its clients. These two deals filled approximately 60 to 70 percent of the company’s extraction gap, and the company will look to fill the remaining extraction gap in its portfolio.

Precision Extraction Solutions and Cascade Sciences came with intellectual property, best-of-breed products and management talent. Agrify anticipates that the two companies will generate $40 million in 2021 revenue on a combined basis. And, that number is expected to increase by at least 50 percent in 2022.

With an eye to add more extraction offerings to its portfolio, more M&A is likely in Agrify’s future. The company is also considering adding drying and curing to its portfolio, as well as downstream offerings like product manufacturing and packaging.

When it does decide to pursue a deal, the Agrify team is looking for top players that have strong IP protection and management talent. Ultimately, any deal will need to be accretive to the bottom line.

Agrify serves large MSOs. Recently, the company formed an R&D relationship with Curaleaf. Once construction on the facility is completed, Agrify will bring in its vertical farming units (VFUs), which will play an important role in R&D projects, according to Chang.

Agrify is primarily interested in newer, limited license markets that are in the early stages of growth. States like New York, New Jersey, Michigan, Illinois, Florida, Arizona, Georgia and Pennsylvania are among the markets that appeal to the company.

During our prior interview, Chang discussed the company’s plans to commit up to $50 million to its TTK solutions. In its fourth quarter, the company has added two more TTK partners, bringing the total up to four. Agrify currently has a TTK pipeline of $200 to $300 million in opportunities. With so much interest in the TTK program, Agrify may consider investing more.

Agrify has a strong balance sheet, but it is considering its options for future fundraising. The success of the TTK program has garnered interest from REITs and other asset-backed lending companies, according to Chang. Agrify has the option to explore debt at the company level, as well as at the TTK project level.

Agrify announced increased 2021 guidance with its Q3 results. The company now expects $60 million to $62 million in revenue, up from $48 million to $50 million. The company ended its third quarter with a backlog of $117.5 million in bookings, and it is anticipating bookings in excess of $100 million in Q4. Chang anticipates the company’s fourth quarter will lead to strong momentum going into 2022.

With the integration of its recent acquisitions, Agrify is now offering cultivation and extraction solutions, translating into a larger share of the wallet. The success of the integration is expected to be reflected in the company’s Q4 numbers, according to Chang.

As Agrify moves into 2022, the team will remain focused on scaling the business. This year, it outsourced the production of its VFUs to third-party manufacturers to support that mission of scalability. The company has also onboarded more third-party installation teams to increase the speed of the installation process. Agrify is putting the necessary infrastructure in place to meet its growth over the next few years and beyond.

To learn more, visit the Agrify website. Listen to the entire interview: