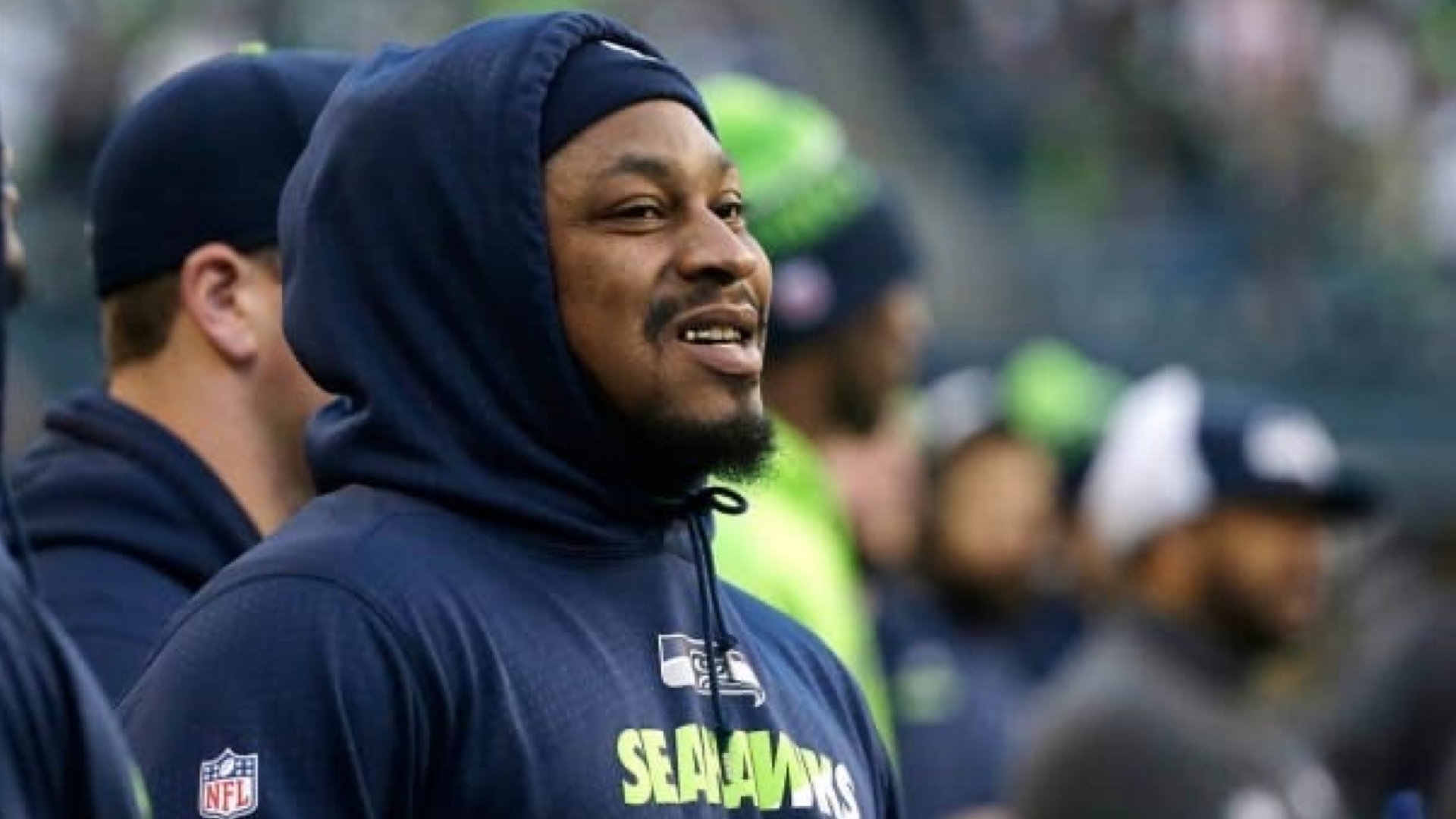 The NFL has never welcomed weed. But last April, the league announced it will no longer test players for THC during the off-season (April 20 to August 9).

This approach is a huge shift from more severe punishments of the past. Former stars like Ricky Williams and Josh Gordon had their careers significantly altered by the consequences of positive tests.

With destigmatization spreading globally, current and former players are dabbling in the legal industry and defying the league’s long-held reputation as the “No Fun League.”

All-time greats like Joe Montana, Calvin Johnson, Rob Gronkowski, Marshawn Lynch, and Brett Favre have all joined the green rush as endorsers, investors, and owners of legal cannabis businesses. And all of these gridiron greats are proud advocates of the plant’s pain management and recovery benefits.

Just in time for the Thanksgiving Day game, we put together a list of former players who are now in the cannabis industry.

Four-time Super Bowl champion Joe Montana is considered by many one of the greatest players of all time. He’s also part of a venture capital firm that made a sizable investment into the legal cannabis industry.

The firm invested $75 million into Caliva, although it was not disclosed how much of it came from Montana. And in 2017 he was part of a $4.1 million dollar invest in a cannabis media company named Herb. Joe clearly sees the potential green in green.

After suffering numerous concussions and being diagnosed with early onset dementia, McMahon has called medical marijuana a godsend for relief it provides from the lasting pain of his 15-year career.

He retired from the NFL while still in his prime, after multiple suspensions for use and eventually returned to the league and continued to be a top performer at his position.

The Heisman winner has now started a cannabis company, Highsman, which he will use to continue to fight the negative perceptions that impacted his career.

Marshawn is big a fan of Skittles candy, and we have a hunch he he’d enjoy smoking the Zkittlez strain out of his diamond-infused blunt brand, Dodi Blunts.

Lynch is a 100% owner of the blunt company, and considers himself the lab rat and marketing team for the operation.

Sleeper pick: If those backs are off the board, consider Mike James, who made history in 2018 by requesting a medical exemption to use weed instead of pain killers.

Johnson ended his Hall of Fame career early after establishing himself as one of the greatest to ever play receiver.

He would often smoke weed after games to alleviate his pain, but one can only wonder if some of that pain was due to the existential crisis that comes from playing for the Detroit Lions.

None the less, Calvin has taken his love and respect for the plant into business with his Primitiv company, alongside his former Lions teammate Rob Sims. The company plans to grow high quality marijuana and help the plant get appreciated instead of vilified, especially by sports leagues.

Along with Ricky Williams, Josh Gordon is one of the names most synonymous with the NFL’s archaic marijuana policies. After being suspended for the bulk of his career, many agree that Gordon had his prime playing days stolen from him strictly due to his use of the plant.

The plant is associated with slow and relaxed stoners, but this hot-tempered speedster broke all of those stereotypes when he revealed that he played every single game of his career high on cannabis.

His affection for smoking before games never effected his performance, either. Harvin excelled as a key part of Florida University’s 2006 and 2008 championship seasons, as well as the Seattle Seahawks 2013 Super Bowl win.

Sleeper pick: Way back in 2005, Randy Moss caught heat for admitting he indulged in the plant. Typical “role model” critiques followed, mostly from coaches and media who still bought into false stigmas about the plant.

The talkative tight end went on record saying almost 90 percent of the NFL are cannabis users. He put his money where his mouth is by posting himself enjoying the plant on social media.

Bennett has said he has investments in cannabis companies and plans to open a dispensary that uses his own creative genius for a marketing edge.

Laremy Tunsil had one of the moment memorable draft day slides ever. The projected top pick slid to 13 in the draft after a picture was released of him smoking a bong through a gas mask.

The photo was released just as the draft was beginning, in an apparent attempt to sabotage his draft stock. Laremy has proven that the incident did not affect his playing ability, fighting to become a top performer throughout his career.

Eugene touts himself as the first active NFL player to advocate for the use of cannabis to help treat the pain that comes from playing football.

Monroe retired at 29, citing head trauma. He now speaks from first hand experience on how cannabis can change the life of players dealing with these problems. In 2016, the NFLPA created a committee to study pain management among players. Peers named Monroe the founding member.

The duo has also partnered with Harvard University to support further research on the plant.

Former offensive lineman Eben Britton currently hosts the “Hotboxing” podcast with Mike Tyson, where weed is almost always in the air. Both Britton and Tyson speak openly about the positive effects cannabis has on their bodies and lives with guests.

This former All-Pro now has a dispensary in Moreno Valley, California with Shango. He faced suspension during his career for positive tests and has spoken about how pharmaceuticals caused “horrific” side effects for players who were not allowed to use cannabis for pain relief.

Sapp was an unstoppable force coming out of the University of Miami and was a clear top pick in-the-making despite having tested positive for marijuana as a freshman.

Sapp says he failed his second weed test during the NFL combine, which caused him to slip to the 12th pick. As a Tampa Bay Buccaneer, he dominated the league, despite a 1997 weed charge for a little over 12 grams.

Sapp would win a Super Bowl with Bucs and eventually joined the Hall of Fame. His success left the 11 teams that passed on him kicking themselves for missing out on his top shelf talent all because of a weed test.

After his impressive pro and college career, Marvin became an investor in several cannabis companies. He also worked as an advocate for numerous righteous causes spanning from the Last Prisoner Project, to a lawsuit filed against United States Attorney General Jeff Sessions which calls for cannabis to be taken off the Schedule 1 drug list.

In 2019 Irving was suspended from the NFL for a positive drug test and abruptly quit the game, leading many to believe he simply couldn’t handle his vice.  On the contrary, Irving was a man with a plan who was determined to stay true to his beliefs.

Irving later explained, “I gave up football for a bigger cause. I want to change the bias toward marijuana. I want to educate America that it’s not a drug, it’s medicine. The real reason I’m not in the NFL is that I’d rather be out here saving lives.”

He now has many cannabis products including Cannabis Passport, a newspaper of sorts with 100 rolling papers, giving you something to read while you roll.

Long has often used his large platform to talk about how cannabis was vilified, and how it became a common tool for players coping with the harsh realities of the NFL.

After playing 11 years and winning Super Bowls with the Patriots and Eagles, Long commented on the hypocrisy around the plant saying, “You know, it’s far less dangerous than guzzling a fifth of alcohol and going out after a game.”

Considered by many to be the best linebacker of all time, Taylor was known for his relentless style of play on and off the field.

Today, the Hall of Famer is working in cannabis with PotNetworking Holding INC. Once considered the master of pain, LT is now trying to relieve some of the damage he caused opponents with “LT Master Pain” CBD oil.

The three-time Defensive Player of the Year was also linked with much harder drugs and nefarious behavior (hence this classic scene from the movie The Waterboy), but Taylor has found a new balance using CBD daily to treat his pain.

Unlike many of the other players on this list, Tatupu says he didn’t start using cannabis until after his days in the NFL. Tatupu made the Pro Bowl all of his first three seasons and was voted an All-Pro once in that span.

Tatupu launched a CBD startup named “ZoneIn,” and credits CBD with dramatically changing his post football life after having to deal with after effect of multiple concussions and surgeries.

The career Tennessee Titan spent his nine years with the same organization and has shown similarl loyalty to the cannabis industry. Along with Eugene Monroe (above), Morgan has worked hard to break the stigma.

Morgan and Monroe appeared in a 2016 interview with Katie Couric on the topic while Morgan was still in the league.  He has also founded many committees that aim to bring the healing benefits of the plant to the forefront of conversations.

Tyrann was a top safety while at LSU and looked like he was primed for NFL success, until his marijuana habit almost derailed everything.

Thankfully, the Honey Badger was able to recapture to the superstar level he was known for in college. Now a Super Bowl champion, we’re not blowing smoke when we say he’s been a huge part of his Kansas City Chiefs’ recent years of success.

Chris was a starting cornerback for some of the most feared defenses of the century.  He won a Super Bowl and was named to three Pro Bowls, but became associated with weed when cops responded to a burglary at his house, found his stash, and charged him with possession.

Anderson is a clear case of how the NFL’s old weed policy was detrimental to players’ careers and lives.  The 2000 first round pick only played two seasons before receiving an indefinite suspension from former commissioner Paul Tagliabue for positive tests.

He is one of the many players whose lifetime of hard work was impacted by false stigmas about the plant.

Don’t underrate how valuable a good punter will be to your pot squad. Chris Kluwe’s boot will be clutch in fourth and twenty situations. And his advocacy for weed over pills likely played a role in the NFL’s recent adjustment of testing and punishment for weed which raised the threshold and lowered punishments for positive tests.

Outspoken kicker Pat McAfee is enjoying a post-NFL career as a podcaster and WWE Smackdown commentator. McAfee once faced pop-test from the league after tweeting about 4/20. Now, he uses his platform to normalize use among athletes and fans, and even partners with CBDmd for advertising.

The man known simply as “Primetime” is exactly who you want returning kicks with the game on the line.

The legendary defender and special teams weapon has also been a supportive voice for cannabis reform, including CBD access for athletes and mass presidential pardons for all non-violent cannabis offenders.