Our second quarter results reflect improved margin performance driven by continued growth in our Minnesota, New Mexico, and Maryland markets, as well as benefits from the recent wind down of operations in Arizona which we discussed last quarter. 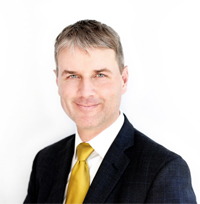 Kingsley continued, “Strong sales growth catalysts resulting from the recent regulatory changes in Minnesota and New Mexico are expected to persist into next year, and we’re also looking forward to contributions from the launch of edibles products which occurred in Minnesota earlier this month. Finally, our expansion project in New York is progressing ahead of the launch of adult-use sales in that important market, and we continue to expect our pending transaction to be acquired by Verano Holdings Corp. will close sometime during the fourth quarter of this year.”

Total revenue in the second quarter was $21.1 million, an increase of 48.2 percent as compared to Q2 2021, and 34.9 percent as compared to Q1 2022. Excluding contributions from the Company’s former Arizona operations, total revenue increased 62.7 percent year-over-year and reflected strong growth in the Company’s Maryland, Minnesota, and New Mexico markets. Retail revenue excluding Arizona increased 74.5 percent to $17.0 million in Q2 2022. Wholesale revenue excluding Arizona increased by 14.2 percent to $2.7 million, driven by increased sales in Maryland and Minnesota.

Operating income in the second quarter was $0.3 million, an increase of $3.5 million compared to an operating loss of $3.2 million in Q2 last year. The improvement in operating performance was driven by increased revenue and gross profit dollars, as well as the slight reduction in total operating expenses.

Total other expenses were $5.4 million during Q2 2022, compared to $2.9 million in Q2 2021. The variance in other expenses is primarily attributable to increased interest expense related to the Company’s credit facility.

Net loss in Q2 2022 was $6.2 million, as compared a loss of $7.0 million in Q2 2021. The variance compared to the prior year was driven by the improvement in operating income, offset by increased interest expenses.

On June 23, 2022, the Company announced the launch of HiColor™ cannabis-infused chews in New York, which are now available through the Company’s retail and wholesale channels in the New York market. The new line of cannabis-infused edibles is currently available in five gourmet flavors and two formulations.

On August 1, 2022, the Company announced the launch of cannabis-infused gummies at all eight of the Company’s Green Goods® dispensaries in Minnesota, in accordance with Minnesota’s new regulations allowing certified medical cannabis patients in the state to purchase certain edible products containing cannabis. Gummies are available in 10mg formulations and in Key Lime, Concord Grape, Hawaiian Pineapple and Oxnard Strawberry flavors. An additional formulation, with equal amounts of THC and CBD and in Alfonso Mango flavor, is expected to follow later this year.

As of June 30, 2022, total current assets were $46.4 million. The Company had cash on hand of $17.0 million, which included net proceeds received from an increase on its delayed draw loan of $13.5 million during the second quarter. Total current liabilities were $18.5 million.

Goodness Growth Holdings, Inc., is a physician-led, science-focused holding company whose mission is to bring the power of plants to the world. The Company’s operations consist primarily of its multi-state cannabis company subsidiary, Vireo Health, Inc., and its science and intellectual property incubator, Resurgent Biosciences, Inc. The Company manufactures proprietary, branded cannabis products in environmentally friendly facilities and state-of-the-art cultivation sites, and distributes its products through its growing network of Green Goods® and other retail locations and third-party dispensaries. Its team of more than 500 employees are focused on the development of differentiated products, driving scientific innovation of plant-based medicines and developing meaningful intellectual property. Today, the Company is licensed to grow, process, and/or distribute cannabis in five markets and operates 18 dispensaries across the United States. For more information about Goodness Growth Holdings, please visit www.goodnessgrowth.com.

Additional information relating to the Company’s second quarter 2022 results will be available on EDGAR and SEDAR on August 12, 2022. Goodness Growth refers to certain non-GAAP financial measures such as Earnings Before Interest, Taxes, Depreciation and Amortization (EBITDA) and adjusted EBITDA (defined as earnings before interest, taxes, depreciation, and amortization, less certain non-cash equity compensation expense, one-time transactions, and other non-recurring non-cash items. These measures do not have any standardized meaning and may not be comparable to similar measures presented by other issuers. Please see the Supplemental Information and Reconciliation of Non-GAAP Financial Measures at the end of this news release for more detailed information regarding non-GAAP financial measures. 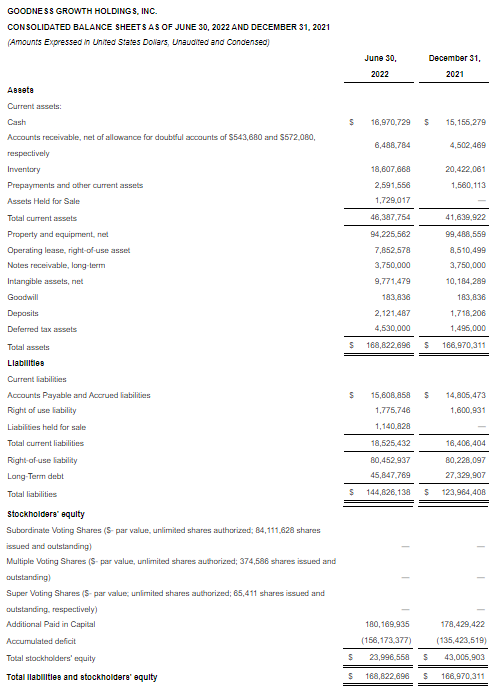 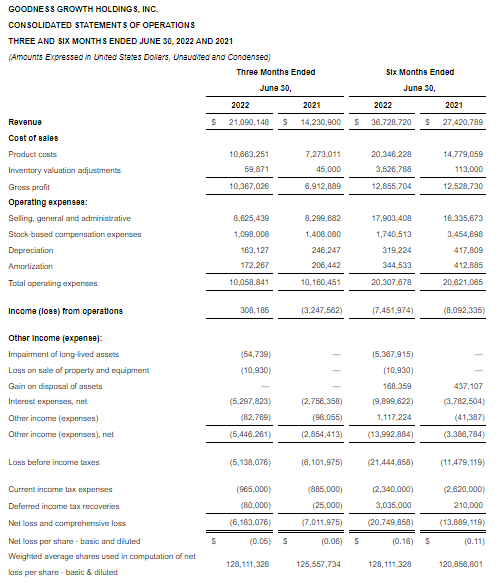 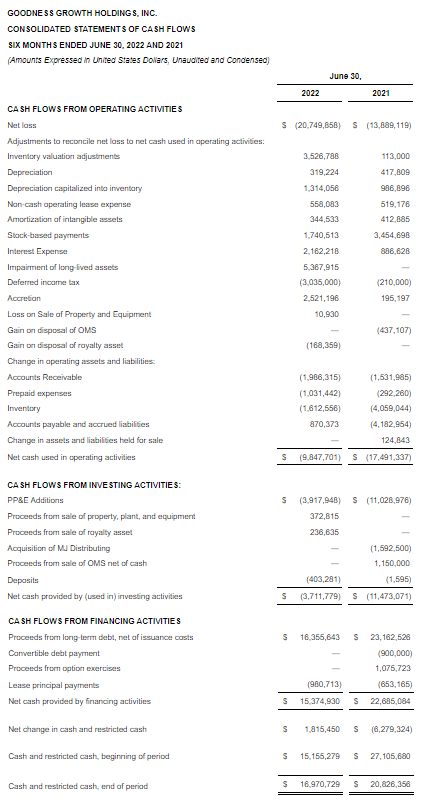 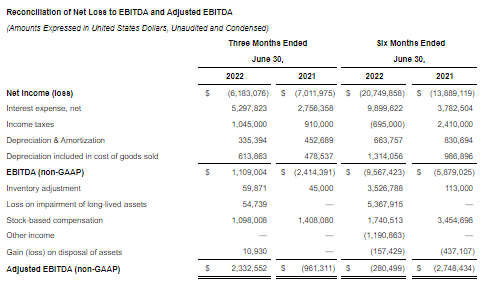