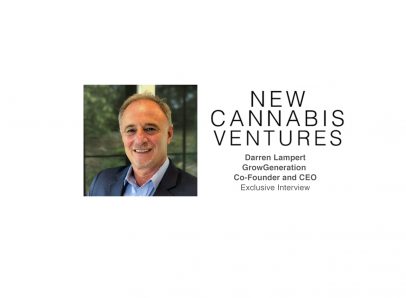 GrowGeneration (NASDAQ: GRWG), a picks, shovels and hydroponics company, operates its business in three segments: retail stores, ecommerce, private label and distribution. Co-Founder and CEO Darren Lampert talked to New Cannabis Ventures in 2021 about the company’s plans to build out its footprint. In 2022, he checked in to discuss adding new states and navigating the current challenges of the cannabis industry.

GrowGeneration has a 13-state footprint with 62 stores built out. The company went up to 64 stores this year, but it opted to consolidate two smaller stores in its portfolio. It plans to consolidate three to five more stores this year, according to Lampert. This decision is being driven by market pressure; the company wants to cut costs and maintain a strong balance sheet. The stores being consolidated are typically within a 20-mile radius of another GrowGeneration location. Lampert anticipates that the company will keep 90 percent of the business in these areas.

While the company is consolidating some stores, it is also adding retail locations in three new markets, New Jersey, Virginia, Missouri, taking its market reach from 13 states to 16 states. The East Coast market, while slower to develop than expected, is promising, according to Lampert. GrowGeneration has signed a lease in New Jersey, and the company is in the process of building that store out. The store is located on the border of New Jersey and Pennsylvania, meaning it will serve as a hub for both states.

The company also has started to build out a Missouri store in St. Louis. Lampert considers Missouri and Virginia to be vibrant markets. These new locations will be smaller than the company’s existing stores because GrowGeneration is focusing on distributing out of its warehouses.

GrowGeneration takes a consistent approach to picking locations. The build team identifies where the licenses, growers and highest concentration of individuals are located in a particular state. GrowGeneration wants to be conveniently located for growers and individual consumers.

While distressed assets while likely continue to come into the market. GrowGeneration is opting for build over buy. Unless a bargain M&A opportunity that would bring considerable value to the company and its shareholders arises, the company will continue to greenfield retail locations in new states with favorable cannabis regulations.

Lampert pointed to stores built in Mississippi and Oklahoma. GrowGeneration opened a 35,000-square-foot store in Jackson, Mississippi. The company is likely a little early to market; licensing is just beginning in the state. GrowGeneration is looking forward to the market ramping up in the fall or early winter, according to Lampert. In Oklahoma, the company opened a store in Ardmore, located on the Texas border.

GrowGeneration also added to its footprint in Maine and California. While the California market is experiencing pricing pressure, the state has allowed some tax relief for growers. Lampert believes that California will always be a big part of the GrowGeneration portfolio.

The company’s online division has faced challenges in 2022. GrowGeneration merged two of its websites. Last year, it bought agron.io, which largely focused on commercial ordering for new builds. That part of the industry has slowed significantly as cannabis operators opt to wait and see before building more grows. GrowGeneration is in the midst of redoing its consolidated website, with plans to roll that out within the next few months. Lampert anticipates growth in the online division again beginning in 2023.

While ecommerce operations have lagged this year, sales through GrowGeneration’s private label division have continued to grow. In the second quarter, the division went to about 12 percent of sales. GrowGeneration’s distribution company, HRG, is also driving growth.

GrowGeneration and its peers are navigating a challenging environment. To understand the current landscape, Lampert looks back to 2020 when the cannabis and hydroponic industries were booming. Money was flowing into the market, and investors were expecting full federal legalization in the near term. That legislative shift has yet to materialize, and the flow of money has slowed. Oversupply has led to pricing pressure, and cannabis operators are opting to hold onto cash rather than building out more operations. The industry is awaiting some kind of regulatory shift, whether a smaller step forward like the SAFE Act or federal legalization

Lampert is hopeful that today’s challenges are short-term, and he is bullish on GrowGeneration’s ability to weather the storm. The hydroponics space is still highly fragmented, but many smaller stores are closing due to current market pressures, leaving less competition in the market for GrowGeneration. In troubled times, leaders get stronger while the weaker players struggle to survive, according to Lampert. He points to GrowGeneration’s strong team and balance sheet as factors that will help the company to move forward, even through today’s challenges.

GrowGeneration experienced rapid growth over the past few years. It went from $30 million in 2018 sales to $420 million in sales in 2021, according to Lampert. The company brought in many new leaders from outside industries to manage that growth. Over the past three months, the company has opted to part ways with that executive team and get back to its leadership roots.

GrowGeneration has had a difficult time hiring outside of the industry. The team has come to the conclusion that leaders who understand the industry and its products are better suited to serve the company, according to Lampert. The company has named Greg Sanders CFO. Sanders has worked with GrowGeneration as a controller for years. Lampert also pointed to the important role Vice President of Purchasing Rebecca Haluska plays. She has been with the company for years.

GrowGeneration has approximately $65 million in cash on its balance sheet, $100 million of inventory paid for and no debt. Lampert sees the company in a solid position to weather the industry downturn, even if it continues into 2023. GrowGeneration is running close to the break even point, despite the tumultuous times, according to Lampert. He expects the company’s balance sheet to be sufficient for years to come.

The company adjusted its 2022 guidance to revenue of $250 to $275 million, down from $340 million to $400 million. The company is hoping for more stabilization in the second half of the year, but it feels comfortable hitting the numbers it has released.

Despite the current landscape, Lampert is bullish on the company’s margins. GrowGeneration reported a gross profit margin of 28.5% with its Q2 results. The company aims to continue offering high-margin, best-of-breed products to growers. It recently launched the Drip Hydro nutrient line, which is had strong uptake over the past three months. And Greenlane continues to fill out its private label division in order to be a one-stop-ship for its customers.

While pricing pressure, inflation and rising supply chain costs are shaping the current landscape, the cannabis industry is still in the early stages of growth. GrowGeneration is taking steps to manage through the challenges and maintain a leadership position in the hydroponics space. The company is still supporting the social equity efforts in the cannabis industry and looking forward to a brighter future.

Beyond cannabis, Lampert sees an opportunity for GrowGeneration to support the controlled environment agriculture industry on the fruits and vegetables side of the business as well.

To learn more, visit the GrowGeneration website. Listen to the entire interview: