How StateHouse Is Planning to Cover the California Cannabis Market... - Read of Green 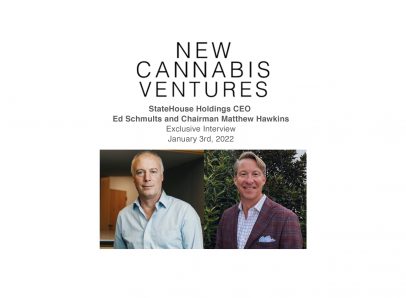 Harborside (CSE: HBOR) (OTCQX: HBORF), Urbn Leaf and Loudpack are combining to form a new player in the California cannabis market: StateHouse Holdings. Definitive agreements have been signed, and the transactions are expected to close in late March. Ed Schmults, the CEO of Urbn Leaf and soon-to-be CEO of StateHouse, and Matthew Hawkins, the Chairman and interim CEO of Harborside and soon-to-be Chairman of StateHouse, spoke with New Cannabis Ventures about the formation of the new company and how it will approach competing in California. The audio of the entire conversation is available at the end of this written summary.

The Formation of StateHouse

Harborside recognized the need to flesh out its operations in order to become a leading vertically integrated operator in California. The company needed more retail, manufacturing and branded products. Urbn Leaf and Loudpack bring that to the table.

Schmults will be stepping into the CEO role of StateHouse, while Hawkins will be Chairman. As CEO, Schmults will be focused on building a lean team aligned around the company’s goals.

With late March as the target date for the close of the deals, the team is already planning for integration. Combining companies always comes with challenges that can be anticipated, such as systems integration, as well as unforeseen challenges. As integration takes place, the StateHouse team will work to mitigate risk and maximize opportunities, according to Schmults. Blending the three companies’ cultures and bringing that together under the StateHouse banner will also be an important part of integration.

StateHouse’s reach will span from the Bay Area to the Mexican border in California. Harborside brings its cultivation operations in Salinas to StateHouse, while Loudpack brings cultivation, manufacturing and production capabilities. Urbn Leaf augments the company’s retail reach. StateHouse will have 15 retail locations by the end of 2022.

As the cannabis industry moves toward more traditional CPG standards, StateHouse will focus on brand segmentation and connecting with its consumers.

The California cannabis market is crowded. When considering the competition, StateHouse has no intention of aiming to be the biggest, according to Schmults. Rather, he wants the company to become the most profitable with market-leading brands. Given the scale StateHouse will have, the company will focus on growing organically, maximizing the efficiency of its vertical structure, making strategic acquisitions and showcasing its brands.

In addition to the competition, StateHouse will need to navigate the challenging market conditions of California. The state still has an active illicit cannabis market, as well as a tough regulatory environment. But, Schmults remains bullish on California and the state’s strong cannabis culture.

Pricing is also a challenge in California today. Schmults expects volatility to continue, but he believes that StateHouse’s vertical integration will provide it a measure of protection from those pricing fluctuations. The company may buy some product from the bulk market, but the majority of its needs will be met internally.

StateHouse is being formed with consolidation in mind, but it will not be buying indiscriminately. Rather, it will be looking for strategic deals at the right price. Retail assets and brands will be its primary targets. When considering retail opportunities, the company will focus on assets with strong geographic locations. When considering brands, the team will look at options in form factors and market segments it does not have. Initially, the company will focus on the bottom and mid-shelf. That is where the most opportunity lies, according to Schmults.

StateHouse’s foundation of cultivation, manufacturing and production capabilities, as well as a solid capital base, gives it the ability to go out and look for additional retail and brands, according to Hawkins. StateHouse is aiming to become the acquirer of choice in the crowded California market.

The company is executing a $77.3 million debt financing deal with Pelorus Equity Group.  It is refinancing existing mortgages, which will lower its cash burn and free up non-dilutive capital for the business, according to Schmults. Harborside also announced a private placement of up to $10 million. These two cash infusions strengthen the company’s balance sheet. Schmults will focus on maintaining a strong capital base and steering the company toward the goals of cash generation and profitability.

StateHouse will not need additional capital in the immediate future. Once the combination is complete and the stock price increases, there could be an opportunity to go to the market for a shelf offering, according to Hawkins. But, it is too early to know exactly what the company’s needs will be.

StateHouse has not released any guidance yet, but several factors are expected to drive growth for the company in 2022. The opening of more retail stores will be a key source of revenue growth, as well as growing the company’s private label business.

Profitability will be the most important metric for StateHouse. The company will remain focused on executing and tracking KPIs across all of its operations with the ultimate goal of generating cash for the business and its shareholders.

As StateHouse moves toward its official formation this spring, the COVID pandemic will remain a challenge, as it is for businesses and individuals across the country. The company will also have to contend with the downturn in the California market. StateHouse will be keeping its eye on the long-term opportunities, focusing on its customers and improving its margin structure.