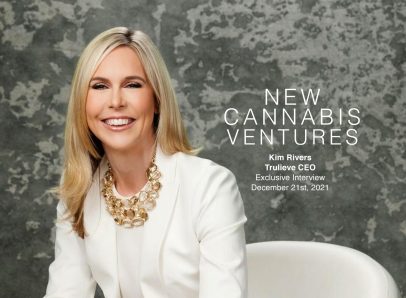 MSO Trulieve (CSE: TRUL) (OTCQX: TCNNF) completed the acquisition of Harvest Health & Recreation this fall. The company continues to execute its hub-based strategy in the United States, leveraging both M&A and organic growth. CEO Kim Rivers last spoke with New Cannabis Ventures in 2020. At the end of 2021, she reconnected to talk about how Trulieve’s platform has grown and continues to scale. The audio of the entire conversation is available at the end of this written summary.

The completion of the Harvest acquisition brought new talent to the Trulieve team. Steve White, CEO of Harvest, is stepping into the role of president of the combined companies, and Nicole Stanton from Harvest joined the team as general counsel.

The Harvest deal added substantially to Trulieve’s footprint. The company now has a southwestern hub thanks to Harvest’s leading operations in Arizona. Trulieve also added assets to its Pennsylvania and Florida operations. The company was also able to bring on the Maryland market, add retail locations in California and access wholesale opportunities in Nevada and Colorado, according to Rivers.

The company has established a hub-based strategy in the U.S. Thus far, it has hubs in three of the five geographic regions of the country: the southwest, the southeast and the northeast. With the infrastructure in place in these areas, it is easier for the company to add assets within its hubs.

In Pennsylvania, Trulieve is a market leader from a footprint perspective, according to Rivers. In July, the company completed a $60 million dispensary acquisition in the state. In 2022, the company will be focused on bringing more of its products to this market and adopting a more uniform brand approach.

The company is also building out operations in West Virginia and Georgia. The company is operational in West Virginia, and it has experienced strong customer demand. It is waiting for some additional testing facilities to come online there, and it is expanding its cultivation and processing facility. Trulieve also plans to open a third location in the state in 2022.

In Georgia, the company is experiencing some roadblocks typical of post-application awards, according to Rivers. The company is moving forward with its cultivation site and dispensary sites in the state while waiting for some additional clarity from regulators after losing applicants have appealed the recent license award process.

Trulieve has a strong track record of success in medical markets, like Florida, but it is adding adult-use markets to its footprint as well. The company has developed a product line with a strong medical focus, manufacturing more than 700 SKUs in Florida. It maintains a robust R&D team, and that strength is transferrable to adult-use markets, according to Rivers.

Trulieve announced a suite of in-house brands that combines brands developed by both Trulieve and Harvest. Now, the company is actively working on brand positioning in its markets. Already, the company’s Cultivar Collection, a high-end craft cannabis flower, is on shelves in markets like Massachusetts, Pennsylvania and Florida. It will soon be in Maryland and Arizona as well. The company’s brand portfolio also includes concentrate line Muse and edibles line Sweet Talk. It has also onboarded Harvest brands like Alchemy and Roll One. Trulieve aims to connect with both cannabis connoisseurs and value-driven customers in medical and recreational markets.

Trulieve will continue to move forward with its hub-based strategy. The timing of building on its existing hubs and establishing operations in the two remaining hubs in the country will depend on the opportunities that arise. All paths to expansion, organic and M&A, are on the table for the company, according to Rivers. Trulieve will remain open to entry to markets via license application, tuck-in acquisitions and potential larger deals, like the Harvest acquisition.

The $350 million private placement at 8 percent helped Trulieve reposition the balance sheet of the combined companies: Trulieve and Harvest. With that funding and cash flow from operations, Trulieve is in a good position, according to Rivers.

The company will be focused on fully integrating the Harvest platform and optimizing the combined operations. There is low-hanging fruit in terms of improved efficiency and margin growth, according to Rivers. Trulieve will be bringing more branded products to its branded retail locations, which will require supply chain investments.

Trulieve has built relationships with its investors through transparency and credibility. The team focuses on executing its strategy and delivering results.

Over the course of its history, Trulieve has done a variety of types of fundraising. How it will approach fundraising in the future will depend on the cost of capital and why the company needs it. Rivers pointed to encouraging signs in the capital markets, even without SAFE Banking. For example, Trulieve could access more traditional construction debt at more normalized terms. The company will always look for the lowest cost of capital with the least impact on its shareholders.

Financial metrics like margin and adjusted EBITDA are vital for managing the company’s growth.  The Trulieve team also looks at customer loyalty metrics across its markets and efficiency KPIs across the different components of its business, as well as core retail metrics.

Trulieve has clear goals for 2022, but a big part of its strategy hinges on remaining flexible. The cannabis industry is constantly in flux, so the team will regularly be checking on its approach to growth to see if they need to do anything differently. Trulieve’s business is not predicated on any type of federal regulatory change, but the profitable cannabis company will be ready to navigate legalization when it occurs.

Visit the Trulieve website to learn more. Listen to the entire interview: