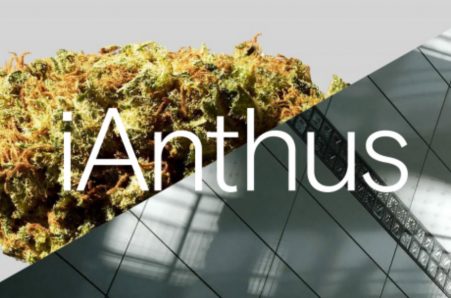 NEW YORK, NY and TORONTO, ON – November 8, 2021 – iAnthus Capital Holdings, Inc. (“iAnthus” or the “Company”) (CSE: IAN, OTCPK: ITHUF), which owns, operates, and partners with regulated cannabis operations across the United States, today reported its financial results for the three months and nine months ended September 30, 2021. The Company’s Quarterly Report on Form 10-Q, which includes its unaudited interim condensed consolidated financial statements for the three months and nine months ended September 30, 2021 and the related management’s discussion and analysis of financial condition and results of operations, can be accessed on the Securities and Exchange Commission’s (“SEC”) website at www.sec.gov, the Company’s SEDAR profile at www.sedar.com, and on the Company’s website at www.iAnthus.com. The Company became a U.S. reporting company effective February 5, 2021. As such, the Company’s financial statements are reported in accordance with U.S. Generally Accepted Accounting Principles (“GAAP”). All currency is expressed in U.S. dollars.

●Due to liquidity constraints experienced by the Company, the Company did not make applicable interest payments due on its 13% senior secured convertible debentures (“Secured Notes”) and its 8% convertible unsecured debentures (“Unsecured Debentures”) due during 2020. As previously disclosed, the non-payment of interest in March 2020 triggered an event of default with respect to these components of the Company’s long-term debt, which, as of September 30, 2021, consisted of principal amounts at face value of $97.5 million and $60.0 million, and accrued interest of $26.9 million and $8.4 million, on the Secured Notes and Unsecured Debentures, respectively. In addition, as a result of the default, as of September 30, 2021, the Company has accrued additional fees and interest of $15.0 million (“Exit Fees”) in excess of the aforementioned amounts that are further detailed in the Company’s financial statements.

¹In New Jersey, a change of control approval is not required at the present time because the Company is awaiting approval by the Cannabis Regulatory Commission (“CRC”) for the Company to close its acquisition of 100% of the equity interests in New Jersey license holder MPX New Jersey, LLC (“MPX NJ”), pursuant to certain contractual agreements (the “Agreements”, and the approval application before the CRC, the “Amended Permit Application”). The Company has a reasonable expectation that approval of the Amended Permit Application will be listed for consideration by the CRC on its monthly agenda in the next sixty (60) days or sooner and, upon any such approval thereof and the closing of the acquisition within no later than five (5) business days thereafter, as set forth in the Agreements, a prior regulatory approval for the change of beneficial ownership of MPXNJ that would result from the Recapitalization Transaction will be required as a condition to closing under the Restructuring Support Agreement. 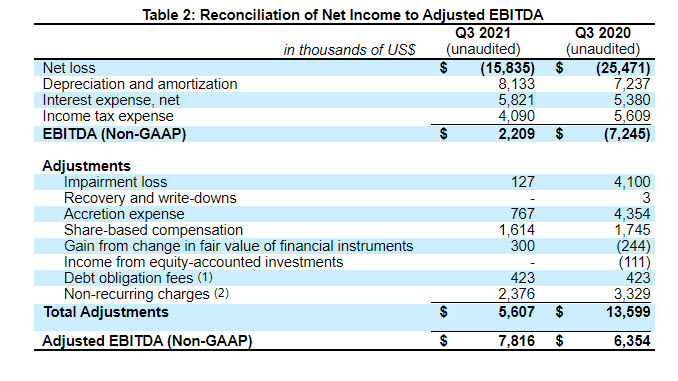 (3) See “Non-GAAP Financial Information” below for more information regarding the Company’s use of non-GAAP financial measures.

A copy of the Restructuring Support Agreement and the amendment thereto are available under the Company’s SEDAR profile at www.sedar.com and were filed on July 20, 2020 and June 21, 2021, respectively, and on the SEC’s website at www.sec.gov.

In evaluating our business, we consider and use EBITDA as a supplemental measure of operating performance. We define EBITDA as earnings before interest, taxes, depreciation and amortization. We present EBITDA because we believe it is frequently used by securities analysts, investors and other interested parties as a measure of financial performance. We define Adjusted EBITDA as EBITDA before stock-based compensation, accretion expense, write-downs and impairments, gains and losses from changes in fair values of financial instruments, income or losses from equity-accounted investments, changes in accounting policy, non-recurring costs related to the Company’s Recapitalization Transaction, and litigation costs related to ongoing legal proceedings.