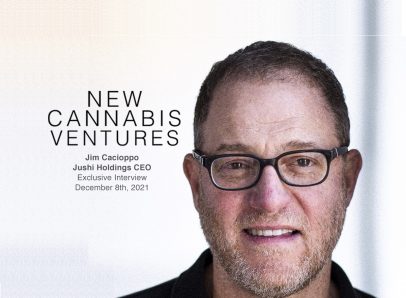 Jushi Holdings (CSE: JUSH) (OTCQX: JUSHF) reported 117 percent revenue growth from Q3 2020 to Q3 2021 and 13 percent sequential growth. In addition to organic growth, the MSO remains acquisitive. Chairman, Founder and CEO Jim Cacioppo last spoke with New Cannabis Ventures in June, and he checked in at the end of 2021 to discuss newly added talent, market expansion and what comes next for Jushi. The audio of the entire conversation is available at the end of this written summary.

During the summer, Leonardo Garcia-Berg joined Jushi as COO. He brings experience from his time at Anheuser-Busch InBev. Garcia-Berg is overseeing the expansion of the company’s grower-processor facilities. Brendon Lynch is also a newer hire, stepping into the Executive Vice President of Retail Operations role in August. Lynch brings retail expertise honed at companies like Anthropologie and TOMS. In October, Jushi named Ed Kremer CFO. Kremer previously worked at companies like Beats by Dr. Dre, Oakley and Lord & Taylor. Robert Young also joined the company as Executive Vice President of Information Technology, bringing his experience from roles at companies including Seminole Gaming and Southwest Airlines.

In addition to overseeing the company’s growing operations, the Jushi management team is focusing on environmental, social and corporate (ESG) principles.

Jushi has made a number of acquisitions over the past six months. In September, the company closed the acquisition of Nature’s Remedy in Massachusetts. Since the deal closed, Jushi has been focused on improving yields and expanding its canopy in the state. It has implemented new technologies in its grow operations to improve efficiency, and it has brought the retail stores onto its online platform. The company also plans to add a third store. The deal also came with IP that the company can use beyond the Massachusetts market. For example, Jushi is bringing chocolate product capabilities from the Massachusetts deal to the Virginia market.

Expansion in Virginia and Pennsylvania

Jushi has generated significant organic growth; it does not necessarily need M&A, according to Cacioppo. As it eyes new markets, it will take a disciplined approach, considering expansion via license application or acquisitions.

In New York, the acquisition prices are too high for Jushi, but it may pursue the application process. In New Jersey, the prices are more reasonable so acquisitions are a possibility for Jushi, according to Cacioppo. The company is also interested in Maryland, another medical market with the potential for adult use within a few years, and it is interested in talking with operators in the state. The company may also consider opportunities in the Florida market.

Jushi has a strong acquisition track record. Cacioppo offered the example of the company’s $80 million cost of acquisition for 18 dispensaries in Pennsylvania. While the company does not intend to rush any deals, it does have the capital ready for M&A it decides to pursue. Jushi secured a $100 million acquisition facility with a 9.5 interest rate from SunStream. The company drew down $40 million to pay for the cash portion of the Nature’s Remedy deal, and it will draw on that facility for its deal in Nevada as well.

Afterward, Jushi will have approximately $40 million left to spend over a 14- to 15-month period, according to Cacioppo. The company will likely be considering Ohio dispensary licenses and Illinois dispensary licenses. Deals in other states, such as Arizona, may be attractive as well.

In November, Jushi filed a preliminary base shelf prospectus to raise up to C$500 million. The company had an existing base shelf, filed a couple of years ago, but that was down to a small amount remaining. If the company issues equity in the future, it will be used to build out its asset base or for M&A. But, Jushi is currently confident in its position with its acquisition facility and a cash balance of just under $100 million, according to Cacioppo.

The company also has collateral in form of its Virginia business. The company owns its real estate there with no debt or leases, which gives it a spare pool of financing of approximately $50 million, according to Cacioppo.

Jushi updated its full-year 2021 revenue guidance to $205 million to $215 million. The company will have a full quarter of Nature’s Remedy revenue in its Q4, a significant driver of growth. Jushi is also establishing a wholesale business in Massachusetts. It is also opening a number of dispensaries in Pennsylvania in the fourth quarter and building out its wholesale business there as well.

As the company continues to add to its growth story, it has built out its leadership team to help manage its development. It is also striving to keep its balance sheet clean. With a strong M&A track record and history of growth, Jushi is prepared to take advantage of favorable regulatory shifts expected to happen within its footprint.