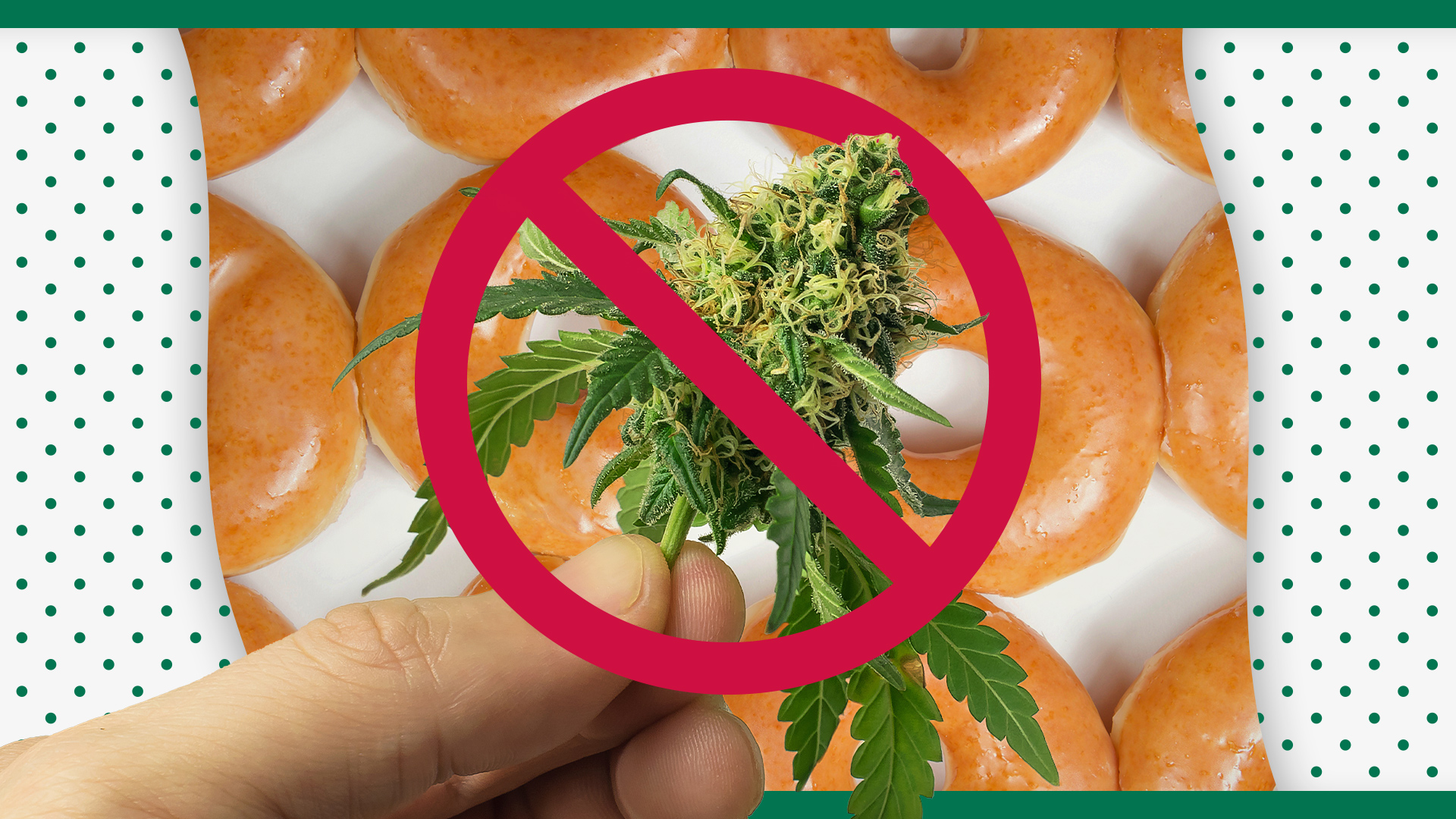 Big Donut is teaming up with the NFL, Big Pharma, and the Methodist Church to defeat legalization in Congress

Follow the money: It’s the best-known adage in journalism, and for good reason. People often lie, but a money trail always gives it to you straight.

Just ask the Community Anti-Drug Coalitions of America (CADCA), which recently deleted a list of their major donors from their website. We emailed CADCA, a national anti-drug organization based in Virginia, to ask why they’d do such a thing, but they failed to respond.

They don’t want you to know who puts up the cash to keep cannabis illegal.

Money talks, but donors don’t want to talk about it

Back in July, the dogged journalists at Marijuana Moment first reported that CADCA was actively lobbying against the Cannabis Administration and Opportunity Act, the bill sponsored by Senate Majority Leader Chuck Schumer (D-NY) that would federally legalize cannabis.

When Dr. Peter Grinspoon—a primary care physician, author, educator, and cannabis specialist—tweeted out his take on that story, he put the focus squarely on CADCA’s donors.

While it’s no surprise that an overtly anti-drug group would actively oppose legalization, to see who’s really calling the shots you have to follow the money a little further down the line.

And that’s where things get surprising.

What is CADCA, anyway?

Founded in 1992, CADCA’s website says the nonprofit organization is dedicated to “building drug free communities.” This is code for supporting an all-out, never-ending War on Drugs. With headquarters located just outside Washington, DC, CADCA claims to represent “over 5,000 community coalitions,” all committed to maintaining the status quo of marijuana prohibition despite its decades of well-documented failure.

You might be surprised to know that a portion of your consumer dollar spent on Krispy Kreme donuts, Johnson & Johnson beauty products, and even your Sunday offering at a United Methodist Church service is going to CADCA to fight legalization.

The donor list is no longer posted on CADCA’s website, but we saved the screen shots and gathered the brand logos together in this handy guide:

A category-by-category breakdown of prohibition brands

Among the dozens of names on CADCA’s donor list, one stood out as fairly inscrutable: Krispy Kreme.

What on Earth does a purveyor of cloyingly sweet corporate doughnuts have to gain from financially backing the ongoing arrest of cannabis smokers? Is it simply that cops eat more doughnuts than stoners, and they had to pick their fighter?

We emailed Krispy Kreme’s corporate PR to find out, but they didn’t respond.

The presence of the National Football League is a little surprising, too. Ex-NFL players are among the most highly visible advocates for medical marijuana and cannabis legalization. Ricky Williams, a pioneering advocate for cannabis even during his playing years, has become one of the leading voices for legalization in pro sports. Former Chicago Bears Super Bowl-winning quarterback Jim McMahon has been outspoken about the relief he’s gotten from cannabis, as have ex-linemen Kyle Turley and Eben Britton.

Gannett is a media company that owns more than 100 daily newspapers and nearly 1,000 weeklies across 44 states—including USA Today, which actually endorsed federal legalization earlier this year.

The other consumer product companies manufacture goods and services you may use every day. Johnson & Johnson makes Tylenol, Band-Aids, Neutrogena skin care products, and Acuvue contact lenses. DirecTV provides cable channels to roughly 13 million Americans, while Scholastic is a book publishing company best known as the home of the Harry Potter series.

The United Methodist Church turned up as the only religious organization on CADCA’s donor list.

Why are you on this list, Methodist Church? In the 1970s, Methodists were among the most mainstream progressives in all of American churchdom. Back then it was all acoustic guitars, felt banners, peace doves, and the groovy Good News Bible. Nowadays, the church’s money pays for suits to lobby members of Congress to keep weed criminal.

No surprise here: Big Pharma sees legal cannabis as a threat to its bottom line, so pharma comprises the largest grouping of companies on the CADCA donor list.

Purdue Pharma, of course, is the most notorious instigator of America’s deadly opioid crisis. In 2020, Purdue pleaded guilty to felony counts of fraud and conspiracy, and agreed to pay a fine of $5.5 billion, the largest penalty ever levied against a pharmaceutical company.

We’re not sure why three of America’s biggest accounting firms are spending their money to keep cannabis federally illegal. There are plenty of law-abiding, tax-paying clients who need accounting help in the nation’s $25 billion legal industry.

Nevertheless, we found PWC, Deloitte, and Ernst & Young among the donors to CADCA.

The law firms on CADCA’s donor list are dominated by big corporate law shops—not the small local criminal lawyers who typically work with the people who get snared by cruel and racist marijuana laws.

So maybe they just don’t see the damage done to hundreds of thousands of Americans who are punished for activities that are wrongly labeled as criminal.

Once again allow us to reiterate: Legal cannabis is already a $25 billion industry in 21 legal states. There are thousands of legal, licensed companies eager to bring their banking needs to America’s houses of finance.

And yet here we find Barclays, Deutsche Bank, and Goldman Sachs contributing to an organization that’s actively lobbying against the federal legalization of cannabis.

Honestly, we expected more addiction recovery companies to be on this list. They’re traditionally among the industries most invested in keeping cannabis illegal. But on the CADCA list we only spotted Caron, the Pennsylvania-based addiction recovery organization with facilities in Florida, New York, Georgia, and Washington DC.

Cardinal Health, the Ohio-based medical industry supply chain giant, is a donor to CADCA’s anti-legalization campaign. So is CHPA, the Consumer Healthcare Products Association, a trade association that works on behalf of the dietary supplements industry. In CHPA’s most recent round of grant funding, CADCA was the group’s largest recipient.

This category holds two of the most surprising organizations on CADCA’s donor list.

The Moyer Foundation (which changed its name to Eluna in 2018) is the nonprofit established by the former Mariners and Phillies pitcher Jamie Moyer. The beloved slow-baller is known widely in both Seattle and Philadelphia for his crafty pitches and his charitable works.

So why is his group on this list? Jamie and wife Karen Moyer, co-founders of the foundation, have long been involved with causes that benefit children at risk, and that includes children harmed by substance use disorders and trauma.

We would respectfully suggest that the children of parents sent to prison for possessing small quantities of cannabis, or children removed from their homes for same, fall under that same category. Legalizing and regulating cannabis reduces childhood trauma.

Also on the list: Truth Initiative, the nonprofit public health organization dedicated to ending tobacco use and nicotine addiction.

Not…sure…why Truth Initiative is getting involved with cannabis. Would an anti-alcohol organization support a fruit juice ban just because they’re both drinkables? This one has us puzzled.

Big-name marketing firms aren’t known for championing clients in the legal cannabis industry, and that’s opened the door for a number of cannabis-focused start-ups to gain traction over the past few years. (And good for them!)

With new companies coming online in New York, New Jersey, Illinois, Michigan, and other major markets, there are plenty of entrepreneurs who need help with branding and advertising.

And yet here we find marketing firms giving their money to CADCA, in order to actively lobby against the federal legalization of cannabis.

What up, Redhawks? Did you know that a portion of your Southeast Missouri State University tuition dollar is being donated to CADCA to keep marijuana federally illegal?

Yes, we know your state just voted to legalize statewide. You probably voted in favor of it. Thank you.

Now go ask your SEMO Board of Governors why they’re spending your hard-earned tuition money to support a national group that wants to keep putting people in jail for cannabis.