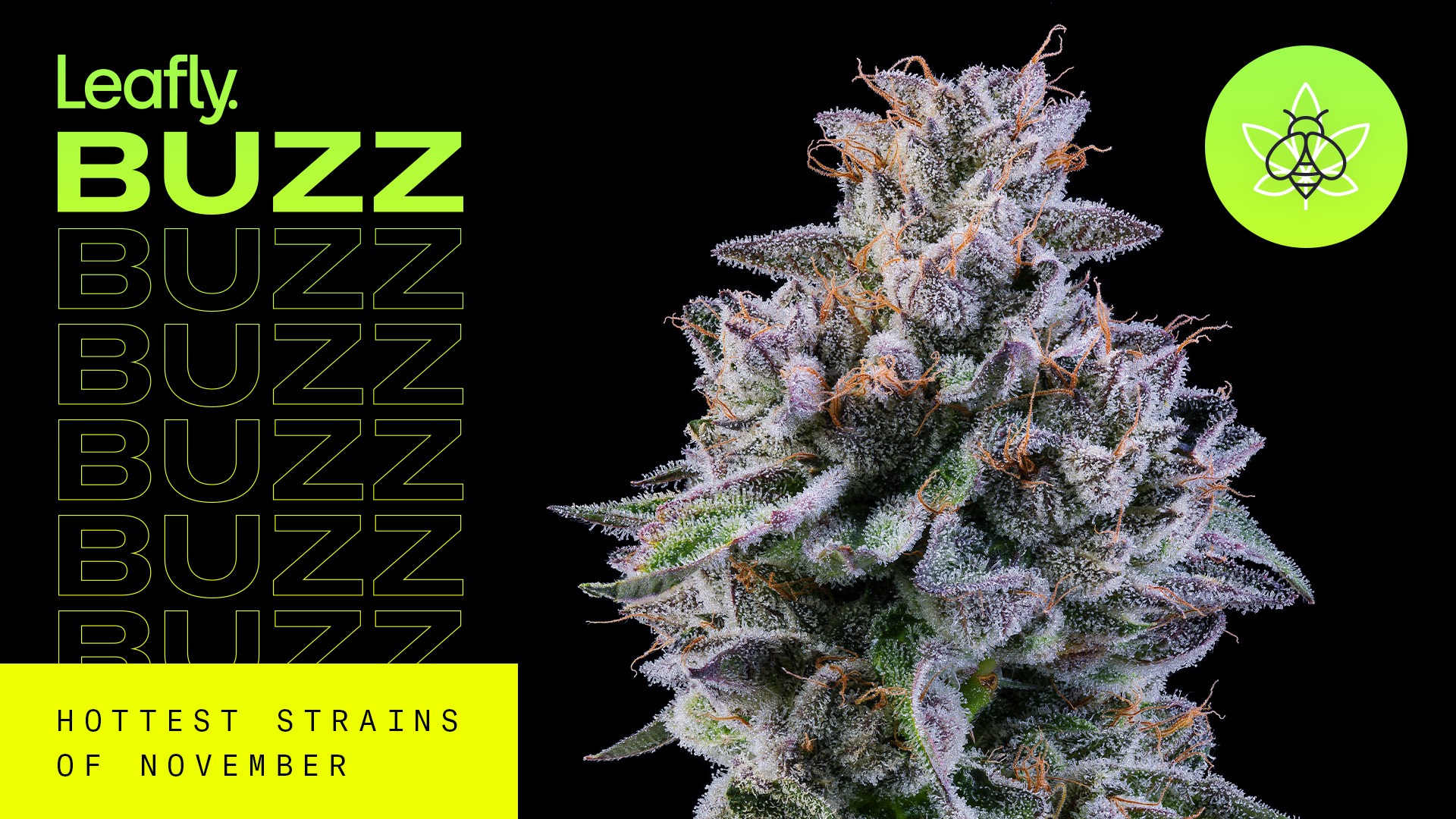 OK, Leafly Nation—you got one shot to stock up good and proper on Green Wednesday for the long Thanksgiving break.

Thankfully, it’s going to be easy. There’s so much mind-blowing, high-caliber flower blanketing the Western US.

Each month, there’s too much hot stuff to cram in, but we give it our best shot with Leafly Buzz—reported from the grows, contests, expos, and stores of California, Oregon, Washington, Colorado, Arizona, and Nevada.

Here’s the cheat sheet for the November heat—here’s Leafly Buzz.

Citrus, cherry and dank—Superboof could restore Tangie family strains to the pot pantheon in 2022. Tangies aren’t exactly trendy per se, but Superboof surmounts Tangie skeptics to deliver undeniable body, depth, and strength. Made by Klone, Colorado Superboof combined Black Cherry Punch and Tropicana Cookies for a daytime, balanced, strong effect that goes great with a hike, yoga, or some unavoidable overtime work to finish before the holidays. Stoners use boof as a vulgar term for bad marijuana. The ironically named Superboof is akin to “superbad,” aka something very good. Growers Triple 7 in California excelled at this cultivar, which also took home awards further north this year. Superboof spiked 11% in interest this month in the Western US.

Get to the bag

Rainbow Belts just had a banner year in outdoor gardens, so don’t hesitate to scoop up any bags you see. At its best, it tastes like tropical candy cereal that’s great for vibing with a movie or other off-hours hobbies. Bred by the inimitable Archive Seeds, Rainbow Belts grows across the West from Lolo, Sira, and so many more. R.B. nudged up 10% in interest this month as the hype for this strain reaches new heights.

Grape, vanilla, and pear tasting Grapes and Cream hits in a relaxing, yet creative and giggly way. No surprise then that this Cannarado-bred strain ranks as a top flavor of the 2022 outdoor harvest. California cloners Phinest have gotten Grapes and Cream into countless gardens, where it’s a growers favorite for its size, yield, ease of growing, and on-trend terps, flavors, and effects. Grapes N Cream still nudged up 2% this month in the Western US.

NBA Hall of Famer Gary Payton aka the Glove and his namesake strain have gone on a tear in 2022, racking up fans coast to coast. Interest in the Gary Payton strain climbed up 10% this month in the West thanks to its on-trend mix of The Y x Snowman—mostly comprised of GSC genes. It smells like spicy, floral stonefruit with giggly, relaxed, talkative effects. Bred by Powerzzzup, roll up a fatty of G.P. and throw on a ballgame for a great time.

Strains this buzzworthy deserve a blunt wrap that does them justice. Al Capone’s slow-burning, all-natural leaf wraps are made to do just that. Finely calibrated to the needs of blunt smokers, Al Capone wraps are individually packaged so they’re never stale, pre-cut to the perfect size, and crafted with a double leaf for an exceptionally slow burn.

Al Capone wraps are available in Original, Cognac, and Rum. When Leafly staffers rolled up samples of each, we found all three varieties blended well with a subtle, balanced effect, where you could taste the natural leaf wrap along with the unique notes of the strain. While lesser wraps can have a harsh smoke or overpower with heavy flavors, these wraps are smooth, smooth, smooth. They’re oh-so-easy to roll and have just the right silky-but-structured texture for party-sized rotations. Find them online and in stores near you.

New in the Leafly strain database

Amid a galaxy of new flavors at the Hall of Flowers expo in October in Cali, Cookies’ Big Dipper shined among the brightest. Cookies breeder ‘Jay’ thickened up the creamy berry cookie flavor of Sunset Sherbert by using Zkittlez. Cookies’ Maywood indoor farm in LA cannot miss. Big Dipper not only looks big, dark, and shiny like the constellation. It’s got those refined dessert terps: thick, creamy, fruity, gassy, and sherbert. The nugs didn’t feel overdried and brittle, but rather chewy with resin and optimal moisture. Red roses, fruit candy, and sweet cream smoke perfume a room. At 36% THC, we like just chilling on this happy, creative, joyful head and body high. Do some crafts. Design some Christmas cards. (Not to be confused with another, less notable Big Dipper strain that’s a Pink Kush variety.)

Drop into the new Call of Duty Warzone on Agent X—Alien Labs’ new cross of hit strains Atomic Apple and Xeno #1. There’s so much hype genetics packed in here: Atomic Apple’s Apple Fritter x Triangle Mints; and Xeno’s Kush Mints x Zkittlez. Bred and grown for Alien Labs, Agent X looks super-green and icy, with a fuel, Z, and mint smell and taste. The perfectly balanced hybrid hits strong as hell, with an uplifting head effect and a relaxed body vibe. You can smoke it all day, but it’s best with some intense lean-in entertainment.

Long before modern gas strains tore our face off, Skunk strains peeled back boomers’ lids. Jesse Horton’s LOWD brand indoor cannabis in Oregon stays true to the brand with Hawaiian Skunk Face—a loud cross of Hawaiian Skunk and Archive Seed’s mega-influential Face-Off OG. After work’s over, strap in and get zooted with the crew on this intense, high-THC hybrid flower. Not for novices.

Picks of the dispensaries

People want to hate on cookies founder Berner for making the cover of Forbes, as the #4 richest hip-hop star in history. Well, haters gonna hate. This new Pacman strain from Cookies and former Bengals NFL star Adam Pacman Jones hits hard on depression, anxiety, pain, and insomnia. It’s a super-legit Seed Junky Genetics cross of Biscotti x Jealousy F2, and it fits right in the huddle of hype flavors for 2022. You pop open the bag and say, ‘Mmmm’ like three times. Pacman smells deeply enticing—sweet, spicey, and dank with GSC family terps. It smokes thick with a hint of mint. (Not to be confused with the older strain, Pac-Man OG.)

Burning up the charts

Bow down to this riotously pink cultivar, Pink Jesus, bred, grown and sold by Sonoma Hills Farm in California. This sativa hybrid smells exotically fruity and creamy, with notes of raspberry and lavender. Sonoma Hills Farm’s Sam Magruder bred it from Pink 2,0 x Starfighter x Heirloom OG, and the Sun+Earth-certified outdoor farm had a phenomenal growing season out in the Northern Bay Area. Pink Jesus also pops up in single-source, infused live resin pre-rolls from Chemistry—hallelujah.

Ballin’ on a budget

Price of weed still too dang, high? Look out for quarter-ounce, half-ounce, and ounce bags this harvest season for super-good deals. Atop the heap, Cypress Hill rapper B-Real’s Insane brand and their new Bomber Bags of small indoor bud. A bomber is B-Real and partner Kenji Fujishima’s slang for super-big joints. You can roll bomber after bomber guilt-free with these smaller-sized buds that go for cheaper than the mega-nugs in jars.

Cookies’ new infused blunts set the bar so high for an infused pre-roll, the competition better make a space elevator. The Adios MF-infused batter blunt, as well the Bernie HanaButter version both slap. The bag design is lit. The terps jump out super-loud. Each hemp-wrapped non-tobacco blunt looks super-professional with a glass tip, and a plug of extract (badder) on the end. They light easily and pull well, with super-thick, tasty smoke that’ll get you litty in the city. Attention everyone finishing up trimming for the season—these blunts make the hours fly by. They’re also flying off shelves at Cookies stores so scoop one up now to win Danksgiving.

Up next, Leafly’s Strain of the Year 2022 in early December. See ya!

Oft-copied, never co-opted—Leafly Buzz is the popular, monthly strain review roundup from Leafly News. We report independently on the connoisseur cannabis conversation, focusing on strain and branded flower of the US west. Reporting includes:

Be the first to know. Sign up for Leafly Newsletters.