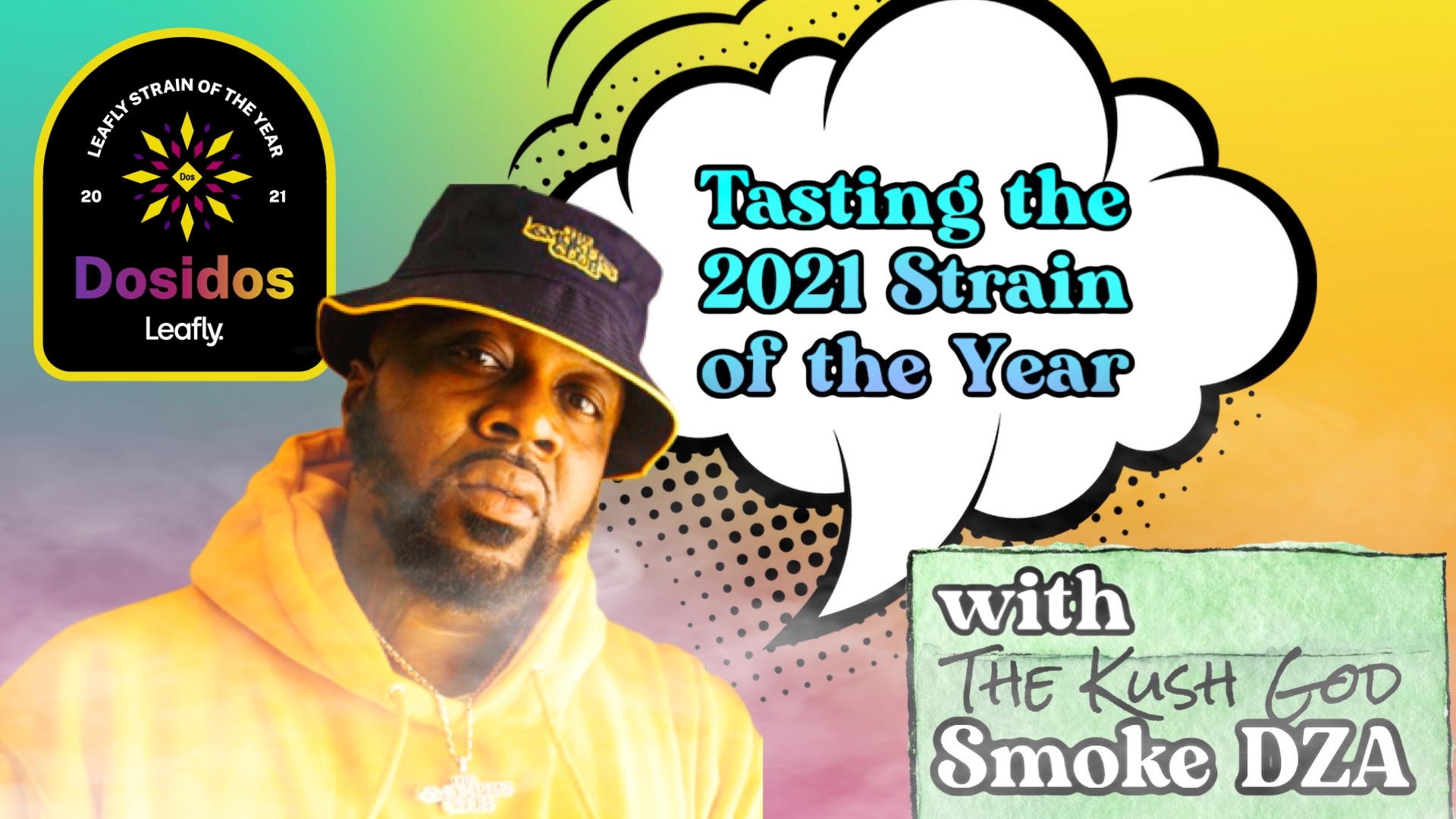 The Harlem rapper gets high on our SOTY and shares his top 5 strains of all time.

To celebrate today’s Leafly Strain of the Year 2021 announcement, we invited NYC cannasseur Smoke DZA to taste our top pick, Dosidos, and teach us about his city’s rich weed history.

The Kush God remembers a time when the only common cultivars on New York corners were Acapulco Gold and mid-grade “Arizona.” But after meeting Purple Haze enthusiast Shiest Bubz in the early 2000s, DZA gained access to the very best “Purp,” “OG,” and “Sour Diesel” the city had to offer.

It wasn’t long before The Kush God was born, and he hasn’t stopped blowing blunts or breaking mics since.

“I’m sitting here smoking this Dosidos, high as a motherfucker,” DZA admitted between pulls of the Leafly Strain of the Year in November.

As he reached the highest of spirits, we asked The Kush God to share his essential strains and teach us about New York City cannabis culture and its rapidly blooming legal industry.

“You know, this question is kind of hard to answer, because I know weed so well. [There’s] really only three different strains. And all them other strains fall into the house of where that shit is at.”

“I like Zkittlez. Shoutout to Greenfield. That’s my friend. Family, actually. He grew that strain. Very rich, right? You can’t smoke a lot of it. You kinda gotta cut it because it’s so strong.”

“I’ma put Sour [Diesel] and Pudée [Purple Haze, aka Piff] in the same breath, because they was the leaders. They together. It’s peanut butter and jelly.”

“I fuck with Dosidos.”

“Late 90s I wasn’t smoking weed like that. I was playing basketball and watching wrestling.

“But you know niggas had the Acapulco Gold’s and all these stupid ass names that they had for Arizona. Which was just different grades of Arizona.

“But then when I met Shiest Bubz, around ‘02, ‘03, I was privileged to be around the best Purple Haze that New York City had to offer.

“Sour Diesel, when it first came out. Not the NY Diesel that the services was selling the in the caskets and all that.

“I’m talking about Sour. The shit that smell like embalming fluid. As soon as you open up the bag, it smell like you lit the shit already.

So Sour and Piff [were] the most dominant strains in the early 2000s in New York City.”

What is The Smoker’s Club?

“The tour graduated into a festival, and we have one of the best marijuana brands in the world right now. As far as merch, festivals, and actual marijuana goes.

“And my own strain that’s in stores right now. ‘Undisputed,’ available at Cookies, Sherbinskis, Marathon OG, all of that shit.”

Why The Kush God uses Leafly

“I think Leafly’s a really cool concept. I like the fact that it’s a credible app that will lead you to the direction for what you want.

“Nothing better than a credible source telling you where something is at in a city where you might not know nobody. To find some good herb. Or find a good spot to get it.

“So shout out, I tip my hat to Leafly for being credible and having their pulse on where the good tree is at.

“I’ve always been fond of them. I’m glad that you guys reached out to talk to The Kush God, because it makes perfect sense. It’s like being at a party with a bunch of people that you got a bunch of shit in common with. Nobody talks?

“So, it’s great to actually do something personally, Smoke DZA with Leafly. And I hope this is just the beginning of a lot more.”