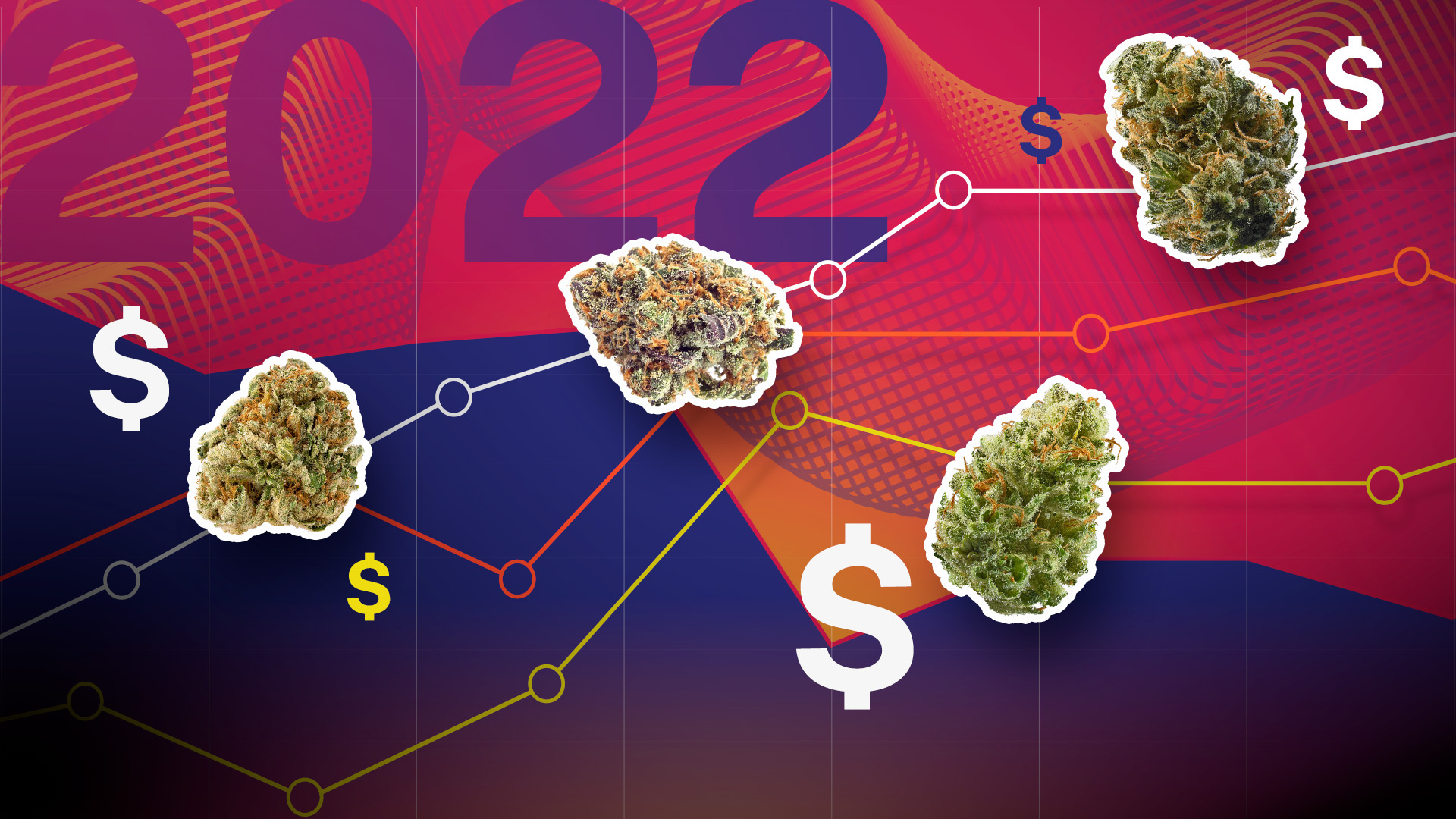 The end of the year is the time of roundups, of showing off your Spotify Wrapped and swapping favorites with friends. Our strain database continues to balloon with over 6,000 entries and counting, so we made our own playlist of which strains shot to the top of dispensary lists and stayed there all year round.

We at Leafly love to keep a firm finger on the cannabis pulse—what’s hot, what’s hype, and what are people actually buying. Look familiar? Leafly’s best-selling strains of 2022 are tried-and-true classics, all of which have stood the test and tastes of time thanks to solid genetics, cultural endorsements, and consistently delicious effects.

Some strain names defy explanation, but Ice Cream Cake is named perfectly—it’s a sugary, sweet delight of a smoke with notes of vanilla and musk with a gassy kick. Smoking it also tends to evoke that childlike glee you felt when the ice cream truck pulled up.

This Seed Junky Genetics creation combines Gelato #33 and Wedding Cake, which are also both on this list, for a strain that never skimps on experience, bag appeal, or flavor. It’s an easy number one with Leafly buyers and connoisseurs, nabbing first place at the Emerald Cup twice, in 2019 and 2021. We also featured it as a Leafly July Highlight.

Love it, hate it, our #2 bestseller Blue Dream isn’t going anywhere! Blueberry and Haze make for a sweet, fruity, grassy hybrid that just might surprise you with its creative head high and body buzz. It’s always affordable, widely accessible, and consistent—is it fair to call Blue Dream the better-tasting Bud Light of weed?

“Blue Dream now is undoubtedly better. It hit all the nostalgic notes and then some. [The high] was inspiring, nice taste; a pleasant daydream.”

It’s actually called Wedding Cake (or Pink Cookies, for the Canadians) because your head will ring like a ceremonial bell on the first hit, while a pungent aroma of sweet vanilla dough, menthol, and a dash of pine fills your sinuses. Seed Junky stays all over this list with his combo of Triangle Kush and Animal Mints that we and the public loved so much, we dubbed it 2019’s Strain of the Year. The enduring love keeps it in the top three. Wedding Cake’s third biggest effect is arousal—and that should not be overlooked. Rawr.

Gelato has its place in the proverbial cannabis hall of fame for its gassy, vanilla cream palate; we named it Strain of the Year in 2018 for its flavors, eye-catching royal purple buds, and deeply euphoric chill. Sherbinski’s Sunset Sherbert and Cookie Fam’s Thin Mint GSC have created the strain that launched a thousand crosses that win cannabis competitions everywhere and every year.

G, the founder of East Coast cannabis brand Lizm, says that its ubiquity means “Gelato is the new Sour. The palate has changed. So many [strains] have this Gelato taste”—that caryophyllene-powered mix of sugar, funk, and diesel. At #4, he’s not wrong!

Cannabis industry pro and social media personality Xochitl Segura-Garcia loves it, telling Leafly that “GG it’s such a big foundation of so many strains. It’s its own little shining star.” It was also honored with first place at the 2014 Cannabis Cups in Michigan and Los Angeles. Not bad for rounding out the top five.

Seth Rogen has forever cemented Pineapple Express in stoner history, but this tropical sativa has stayed on dispensary shelves because she tastes like a Jamba Juice smoothie and smokes like a shot of pre-workout.

At No. 6, Pineapple Express proves that people do in fact love sativas for their creative zeal and tart terps, though stony hybrids still reign supreme. G-13 Labs combined Big Bud and Hawaiian for a cerebral vortex that would make you bold enough to blow up a grow operation.

To smoke Sour Diesel is to literally put gas in your cerebral engine. The tastemakers of the East Coast bred Sour Diesel from Chemdawg and Super Skunk to have a strong diesel nose that comes across skunky on the tongue—with Bugatti-level buds in electric green. New York made it famous in the 90s, but it and its iterations remain well-loved all over the country now, and it hangs on amongst more contemporary strains at No. 7. Mikhail Harrison, a Leafly contributor and connoisseur, says that “it’s a lost gem! I’d be willing to pay $1,000 for an ounce of real Sour Diesel.”

Fuel up for NYE on Sour Diesel—December’s Leafly HighLight

No cap, this strain smacks. MAC hit the cannabis scene much like the trucks—hard—due to its pungent, garlic terpenes with hints of citrus and the ability to lay the most experienced stoners out. If you’re in pain or staying in for the night, this elegant stew of Starfighter, Columbian, and Alien Cookies bred by the incomparable Capulator does the trick. It’s one of the youngest strains on this list, but still asserts its place at No. 8.

This is a true connoisseur’s strain—it placed second in two different categories of the 2020 Oregon Cannabis Cup, and eighths of it have sold for up to $100.

Before you judge, what has Purple Punch ever done to you? This indica-dominant strain maintains that grape-forward, Kool-Aid taste that made Purple strains famous while imparting a high that loosens you up and won’t glue you to the couch. Both its parents, Grandaddy Purple and Larry OG, also ensure it’s a looker, with violet buds streaked with green and trichome frost. Symbiotic Genetics deserve some credit—without Purple Punch, we wouldn’t have afternoon delights like Mimosa or Wedding Crasher. It’s not a top-fiver, but Purple Punch clearly has some fans at No. 9.

The only thing toxic about Durban Poison is how underrated it is. This landrace sativa (read, pure sativa) fires up your neural synapses with a rich, resinous nose of black pepper and pine trees. Hailing from the port city of Durban in South Africa, Durban Poison has multiple cannabis cup wins under its belt, and is one of the parent strains of the much-loved Thin Mints GSC. Even at number 10, Durban Poison looms large in stoner history.

G from Lizm considers it to be like Mick Jagger or Gene Simmons—you still love them even as they’ve passed their peak popularity because they keep rocking.