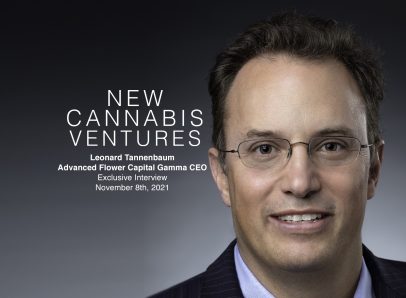 Advanced Flower Capital Gamma (NASDAQ: AFCG) is a NASDAQ-listed institutional lender focused on the cannabis space. The REIT is focused on developing the best cost of capital in the space and providing capital transparency. AFC Gamma CEO Leonard Tannenbaum last spoke with New Cannabis Ventures in May, and now, he checked in to discuss the company’s investment portfolio, its investor mix and funding position. The audio of the entire conversation is available at the end of this written summary.

Inside and Outside Talent

The team at AFC Gamma is rapidly growing with both internal talent rising in the ranks and outside talent joining the leadership team. Tannenbaum pointed to Gabe Katz who has provided strong legal leadership at the company and will ultimately become Chief Legal Officer. AFC Gamma also looked outside to bring in a new CFO. Brett Kaufman, previously the CFO of Ladenburg Thalmann Financial Services, joined the company over the summer.

AFC Gamma has investments across 14 states with about 14 borrowers. The REIT is focused on building a diversified portfolio with a focus on limited license states; it currently does not have any investments in states like California, Oregon and Washington.

Tannenbaum pointed to recent deals including a $50 million deal as part of Verano’s $120 million credit agreement amendment and an expanded credit facility with Justice Cannabis Co.

As AFC Gamma continues to diversify, markets like Georgia and New Jersey will be exciting. With the delay of adult use in New York, Tannenbaum expects surrounding states like New Jersey and Massachusetts to benefit.

The California market does not make sense for the company right now because of factors like the state’s illicit market, but that doesn’t mean it will never consider investments in the state. AFC Gamma is currently looking at its first deal in Colorado, a market it has avoided in the past.

The company is also considering opportunities in Florida. It had a strong investment in the state with Bluma Wellness, working closely with the company to develop its footprint and distribution. That company had a major success story in the form of a $200+ million acquisition by Cresco Labs. AFC Gamma did earn money for its investors as a part of that deal, but ultimately, Cresco Labs opted to use another source of capital.

AFC Gamma’s investor mix includes a strong list of institutional investors, like UBS O’Connor, Hood River Capital Management and Philadelphia Financial Management of San Francisco. The company’s institutional investors have taken a long-term view on the company, not selling many shares since AFC Gamma’s IPO, according to Tannenbaum. While these investors are a strength for the company, it does not have many retail investors, which affects trading volume. The company is investigating ways to attract more retail investors.

The company builds relationships with its investors through open communication and delivering on shareholder returns. Tannenbaum is the largest shareholder in the company with almost 25 percent of the common stock. He writes the credit line to the company, and he made the decision to donate the money earned to the AFC Foundation, with a focus on supporting charities that help children in the states in which the company operates. The team also plans to ask its borrowers for input on worthy charities, according to Tannenbaum.

Following its IPO earlier this year, AFC Gamma raised $56.4 million in a public offering this summer and $100 million in debt capital this fall. Having equity and debt gives the company two levers, according to Tannenbaum. The company raised equity at a premium to book value with the intention of being accretive to shareholders and putting that money to work quickly. The company also wanted to establish its debt cost of capital.

The company needs to have access to capital to support its existing clients and to help new clients establish their footholds. As the market evolves, AFC Gamma intends to be the institutional partner of choice with transparent capital availability.

AFC Gamma is expected to have deployed roughly $300 million by Dec. 31. As of its last reported numbers, the company is close to that goal. The fourth quarter is the busiest seasonally, but the timing in cannabis can be unpredictable, according to Tannenbaum. Deals take 30 to 90 days to close, and it is possible some fourth-quarter deals could slip into January or February of next year.

The company continues to experience a high volume of deal flow.  AFC Gamma has an actionable pipeline of about $900 million, which is composed of deals in three different buckets. The first bucket is made up of large MSOs, such as Verano. The second group includes second-tier operators, companies in a smaller amount of states and not yet publicly listed. The third bucket includes single-state operators. The portion of potential deals in each of these groups is constantly changing, according to Tannenbaum.

AFC Gamma reported $7.9 million in net income for Q3. Its analysts have a strong grip on AFC Gamma’s prospects as a public company, according to Tannenbaum.

While the company does not provide guidance, Tannenbaum did point to the company’s dividend which increased from $0.38 to $0.43 per share in the third quarter. And, AFC Gamma reported approximately 20 percent yield to maturity on its portfolio, which is driving a lot of the company’s results, according to Tannenbaum.

Tannenbaum expects the SAFE Act to pass within the next year, but cannabis players will need to contend with how the legislation is applied along with the other rapidly occurring changes in the industry. AFC Gamma will continue to focus on diversifying its borrower base and lowering the cost of capital for its borrowers. While yields may compress with legalization, AFC Gamma is positioning itself to be a strong lender partner that knows the business of its borrowers.

The AFC Gamma team is also closely watching the M&A cycle taking place in the industry. Consolidation could create some velocity in its portfolio, but it could also help some of its second-tier players become first-tier players. While a handful of companies may be pulling away from the pack as top 15 players in cannabis, Tannenbaum sees a lot of slots still open. He is excited to watch the continued M&A activity and development of new states as companies vie for the top spots in the cannabis business.

To learn more, visit the AFC Gamma website. Listen to the entire interview: