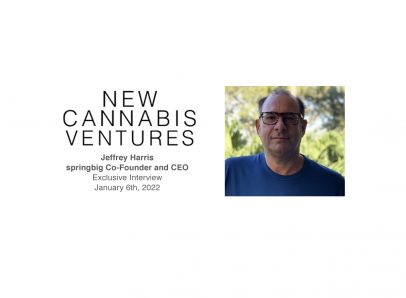 In November 2021, cannabis loyalty and marketing software company springbig announced plans to go public via a SPAC transaction. The company’s Co-Founder and CEO Jeffrey Harris last spoke to New Cannabis Ventures in 2020, and he checked in to talk about the process of going public and the company’s ambitions to become a cannabis technology industry consolidator. The audio of the entire conversation is available at the end of this written summary.

The springbig team began the process of going public in early 2021. They considered a number of paths, ultimately deciding that the merger with Tuatara Capital Acquisition Corp. was the right way to go. The company is now working toward the shareholder vote process, and it will likely be listed on the NASDAQ under the springbig name shortly after that, according to Harris.

Today, springbig is a key player in cannabis loyalty and digital communication software. As a public company, it will seek to widen its service set and the opportunity for its clients to engage with springbig. It will be pursuing growth via organic and non-organic means.

Harris’s role with the company will remain the same, although some of his responsibilities will evolve. But, he will remain in charge of ensuring the company maximizes shareholder value.

Harris expects that springbig will add some new people to the team to help the company move forward over the next six months.

The springbig platform has continued to evolve over the past two years. The company is focusing on helping its clients to build smarter ways to communicate with cannabis consumers. For example, springbig introduced a “build your own segment” feature that allows users to create a unique group of customers and build targeted marketing for that group. springbig has also launched a brands platform, enabling brands to direct directly with consumers. The company is also in the process of adding the ability for users to leverage data to optimize promotions without over-promoting and giving away too much margin.

The opportunity to become an industry consolidator was one of the main motivations behind springbig’s decision to go public. Having public currency will help the company to acquire other players and augment its capabilities. It is already focusing on potential merger opportunities, exploring opportunities in areas like data, advertising, ecommerce and marketing automation.

springbig has over 1,000 clients with more than 2,300 locations on the retail side of its business. On the brand side of the business, the company has about 100 clients, a number that is steadily growing. The company will have plenty of organic growth opportunities as more states open up and more licenses are awarded.

The SPAC has $200 million in cash. Harris anticipates that some shareholders will take their cash out, but he expects springbig to have ample cash to fund its organic and non-organic growth plans. Listing on the NASDAQ will open the door to more capital access. The company will likely have some secondary offerings in the future, according to Harris.

Up until now, springbig has been private. As it makes the transition to a public company, the team will need to become accustomed to a different approach to investor relations. springbig will need to provide updates on a quarterly basis and let investors know what to expect in coming quarters.

With springbig set to make its public debut this year, organic growth of its retail and brand businesses as well as M&A will be significant drivers of growth. Year-over-year growth will be a crucial metric for the company. Harris wants to ensure that springbig will meet or exceed the projections given to the public. Though going public is uncharted territory for springbig, Harris is confident in the company’s team, strategy and cash position.

To learn more, visit the springbig website. Listen to the entire interview: