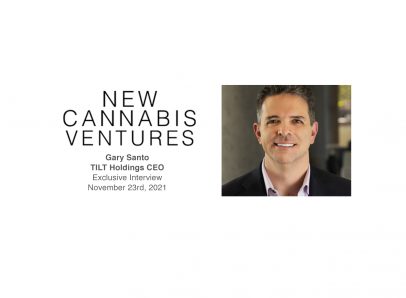 TILT Holdings (NEO: TILT) (OTCQX: TLLTF) has entered its second act, shifting the company to a unique B2B model. CEO Gary Santo last spoke with New Cannabis Ventures in May, when he was just stepping into his leadership position with the company. Since then, the company has bolstered its team, made progress on the MSO side of its business and continued to execute on its technology operations. Santo checked in to discuss the company’s brand partnerships, its U.S. markets and TILT’s runway for growth. The audio of the entire conversation is available at the end of this written summary.

Unlike most other cannabis operators, TILT Holdings has a substantial ancillary business, primarily related to the distribution of CCELL vaporization devices. The company also has cannabis operations in three states, where it has a focus on wholesale. Since Santo assumed leadership of the company earlier this year, it has added several brand clients, where TILT is able to offer the customer both hardware for vaporization as well as a wide range of form factors.

Over the past few months, TILT has made a number of additions to its team. The company put the word out that it was looking for talent, and in many cases, talent came to TILT. For Santo, this is an indication that TILT is doing something right.

David Catanzano, who previously worked at Holistic Industries and Columbia Care, joined TILT as SVP Head of Cannabis Operations. Sean Cute, a grower from California with two decades of experience, joined as Vice President/Head of Cultivation. Thomas Hayden stepped in as the company’s SVP, Head of Information Technology. Oggie Fitzpatrick came on board to head up the company’s R&D. This spring, Darryl Henderson joined the team as SVP, Head of Human Resources.

TILT has also found strength within its internal talent. For example, Sean Harrison initially worked in Massachusetts, and now, he is overseeing processing at all of the company’s facilities.

The company started this year with just one medical cannabis dispensary in Massachusetts. Since then, TILT has received adult-use approval for its Brockton dispensary, and it has gone through final inspections for adult-use at its Taunton dispensary. Its Cambridge dispensary is expected to be operational by the end of the first quarter, according to Santo.

While many MSOs receive the lion’s share of shelf space for their own products, TILT takes a different approach. The company uses a significant chunk of shelf space at its stores for its brand partners.

This summer, TILT announced plans to enter the New York market through a partnership with the Shinnecock Indian Nation. With the price of assets in the state so high, a partnership seemed like the right fit for the company, according to Santo. Through the partnership, TILT will provide management services and approximately $18 million in capital to support a vertically integrated cannabis operation. The company will be paid back on its loan. It will receive 11.25 percent of all top-line revenue for management services and get about 18.75 percent of the free cash flow, according to Santo. The Shinnecock will retain ownership of the operations. Santo sees this partnership as a strong example of how social equity partnerships should be built.

TILT is waiting to activate a number of its brand partners, including Old Pal and 1906, in the Pennsylvania market. But, the market is experiencing a product approval slow-down, according to Santo. He does not expect this slow-down to be permanent, and the team is working to understand the necessary approvals to bring SKUs to market in the state.

While the path to adult use in Ohio is not as clear as it is in Pennsylvania, the availability of product SKUs and form factors is a little more open, according to Santo. TILT is looking ahead to activating more brands in this market. The company does not have cultivation, but biomass is plentiful, according to Santo.

The northeast corridor remains an exciting opportunity for growth. TILT is aiming to keep all of its plant-touching assets within a few hundred miles of one another. While federal illegality prevents entirely centralized cultivation and manufacturing, this approach is the next best thing, according to Santo. States like New Jersey, Connecticut and Rhode Island could be of interest for further expansion. While the northeast is a focus, the TILT team will remain open to other markets, particularly those where it could help its brands to make a difference.

Right now, TILT is focused on getting its existing assets up to speed. Its current operations still have plenty of room to grow. The company has stores just coming online, and it is aiming to increase its cultivation yields.

As the team looks to 2023 and beyond, M&A may be of more interest. The company’s preference is partnerships, staying asset-light, but it will consider opportunities. For example, there may be M&A to consider on the technology side of the business, doing deals to control more of the supply chain.

TILT is a CCELL distributor through Jupiter, its technology operations. CCELL remains the flagship technology, but the company is considering whether or not to expand in the inhalation technology space. TILT is in interesting conversations with potential partners that touch different parts of the supply chain, according to Santo.

This summer, the company secured a $10 million revolving credit facility. TILT does have approximately $75 million in debt; half comes due in November of next year and the other half in 2023, according to Santo. So far, the company has not done sale lease-backs, which means it could leverage its Massachusetts and Pennsylvania properties if necessary. It is also generating cash flow from operations.

Santo does not want to wait until November of next year to determine what to do with the debt. He sees options for the company, and he likes the idea of using different avenues to get cash.

While TILT has a differentiated model, Santo is aware that this is a second chance for the company. Investors want to know that the company is executing.

With its Q3 results, TILT reiterated its 2021 revenue guidance of $205 to $210 million. Jupiter has returned to its pre-COVID and pre-vaping crisis levels, according to Santo, driving growth for the company.  TILT has adapted to the constrained supply chain by deploying working capital to carry more inventory than normal, allowing it to get inventory to customers when they need it. This strategic decision has helped the company pick up some MSO accounts from its competitors and some non-CCELL providers, according to Santo.

While Jupiter has been a big driver of growth, the plant-touching side of the business is now starting to catch up. Stores opened later than hoped, but they are open now, and the company is starting to realize efficiencies within its grow operations.

TILT is one of the few MSOs to show double-digit sequential growth quarter over quarter, according to Santo. The company’s approach to wholesale and its brand partnerships have helped to insulate it from margin compression and price pressure.

Santo expects that TILT’s margins will improve as the plant-touching business gains steam with stores opening and New York operations. He anticipates that the company’s revenue and EBITDA margins will have smoother trajectories, with some of the volatility offset by Jupiter.

Santo is confident that TILT has done the hard work of getting a solid team in place. The company is solidifying its foundation and making the most of its second act.