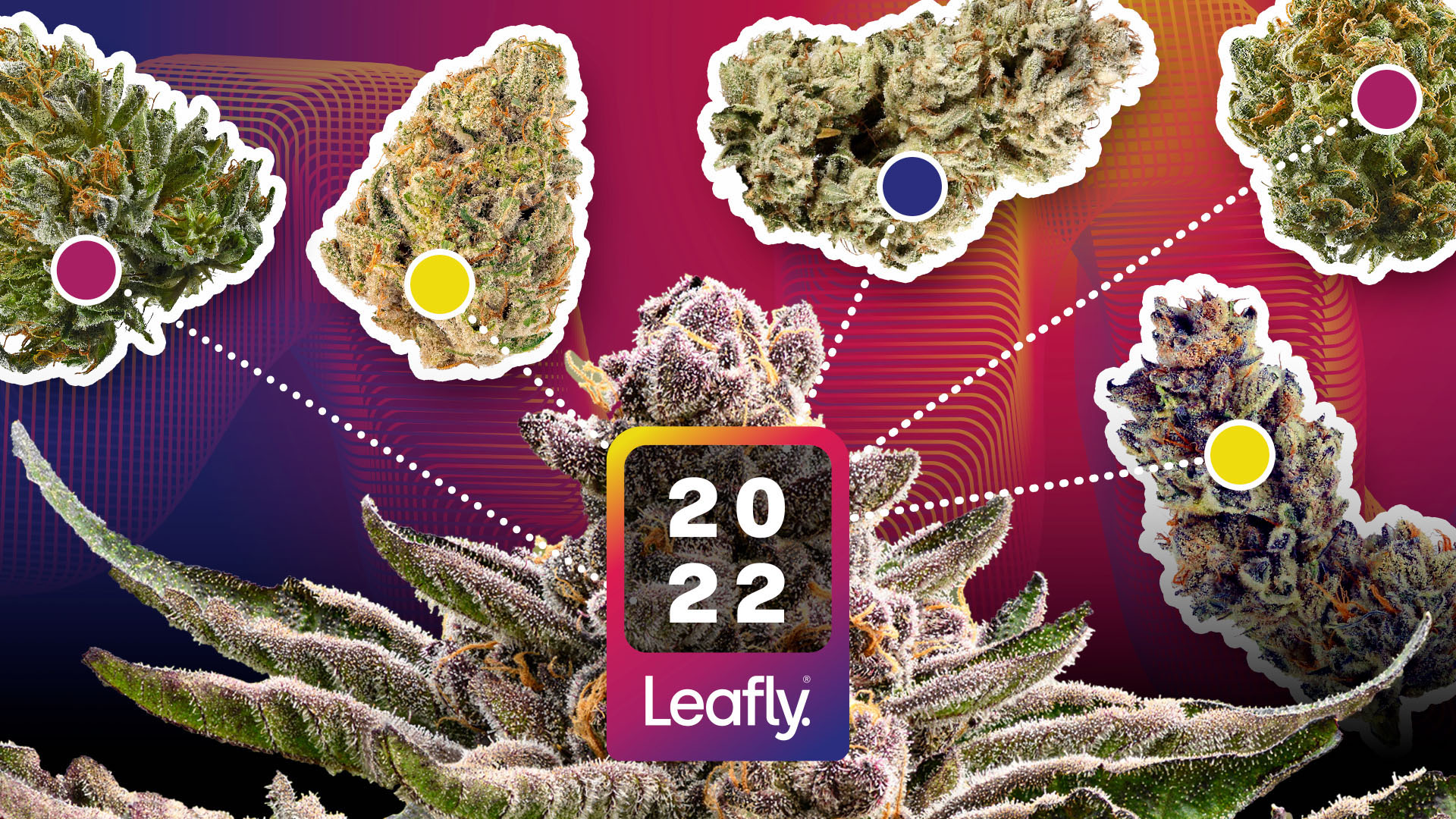 Whew! The cannabis world made huge strides in 2022 as more East Coast states launched their adult-use markets and two more voted to legalize cannabis. That means millions of more Americans won’t need to play the green-eyed monster, and will soon get to access the 2022 Leafly Strain of the Year—Jealousy!

Jealousy, a Gelato #41 and Sherbet bx1 cross, boasts all the best qualities that made us all fall in love with Gelato and Sunset Sherbert genetics from first puff. It’s a looker, with bold purple buds that shine like a Rolex, and a nose you’ll always smell coming; the candy terps laced with earthy notes will make you the envy of any room you walk into. But even though it’s in over 1,500 stores nationwide, as such a new strain, you won’t always be able to find Jealousy stocked at your local shop or with your favorite “guy.”

Don’t get FOMO just yet. We’ve compiled a list of comparable strains, both by genetics, effects, and flavor, that will wet your whistle in the meantime.

I mean duh! At this point one only need say Gelato to evoke its winning characteristics—delicious, pannacotta terps with a diesel kick, beguiling buds in shades of purple and green, and a high that both patients and casual stoners love. Much of Jealousy’s reputation comes from its parent Gelato. San Francisco birthed a whole legacy of Cookies strains, and Sherbinski gets the crown for creating Gelato from Sunset Sherbet and Thin Mint GSC. With plenty of cannabis cup placements on its own, Gelato’s progeny have made it as Leafly’s Strain of the Year twice now. We know it won’t be the last.

Sherbert is one of the original members of the Cookies family, a sweeter Cookies cousin with less skunk and more tangy sugar taste that keeps the sesh mellow. It’s both a Jealousy parent and grandparent, (remember Jealousy is Gelato 41 x Sherbert bx1) but we forgive the Targaryen-like strain family tree because of Sunset Sherbert’s intense zen effects, bakery terps, and pretty green buds. Without it, we wouldn’t have Gelato, and thus an entire generation of cup-winning strains.

This iconic strain made itself known in the Bay Area with a quickness—it’s dank as hell, sweet yet also savory, dense, and debonair. Is it fair to call GSC the Beyonce of weed? It never fails to show up, show out, and reinvent the weed wheel. There’s a reason it became the premiere strain and namesake of Berner’s cannabis empire—it makes everything you do feel like a treat, and tastes like one too. GSC will never go out of style.

We could pull up about 100 rap songs that convey the inimitable qualities of Runtz, our 2020 Strain of the Year. Runtz is somehow sweet and sour, tangy and gassy, sharp and sedating. Jealousy and Runtz are like half-sisters, competing to be the weed world’s golden child; Runtz’s Zkittlez and Gelato lineage make it a little fruitier and more cerebral than Jealousy. Since Yung LB put Runtz in the streets, the strain has spawned dozens of new iterations as breeders tinker with its multi-platinum qualities. If Runtz is on the menu, people are buying.

Caleb Chen, founder and editor of The Highest Critic, believes Gelato “is one of those [strains] that hit at the exact right time; it hit the mainstream and underground at the same time.” In his research, Chen found that “Gelato” is the subject and even the title of 42 different rap songs.

Like an Italian wafer, Biscotti serves class with a hefty portion of chocolate chip terps. A quick sesh makes all worries melt away, though some may find themselves needing a midday siesta after smoking. Biscotti is a cousin to Jealousy, made from a Gelato #25 pheno and South Florida OG bred by the Cookies family. It’s a more earthy, OG-forward rendition of those caryophyllene-driven terps that cleanses the palate of any sesh lineup.

You won’t lose your mind or fight Batman, but a joint of Jokerz will definitely make you grin big. This is a Jealousy second cousin, but its stoney expression and gassy terps laced with sweetness will have you thinking they’re twins. And its marbled buds in green and purple oozing with calyxes are no laughing matter. Compound Genetics wisely bred Jokerz from White Runtz and Jet Fuel Gelato. Among other honors and a lot of buzz, Jokerz won Oregon’s 2022 Leaf Bowl out of more than 250 entries.

If you can’t get the real thing, here are some Jealousy crosses and relatives that still pack a wallop.