The Global Cannabis Stock Index posted a new 52-week closing low on Monday and then rebounded over the balance of the week, increasing 3.1% to 34.32: 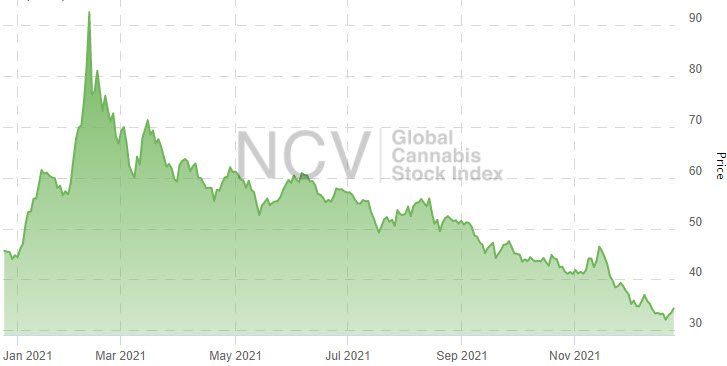 The cannabis sector has continued to evolve through several ups and downs over the past few years. 2021 began by extending on massive gains in Q4 but hit a wall in mid-February, sliding the balance of the year after the market had gotten ahead of itself. Disappointment over the slow pace of federal reforms or the move towards legalization was a factor, but decreasing growth in cannabis sales, regulatory delays in several states and the implosion of the wholesale flower market in California played roles as well. In Canada, while the market has continued to grow, the evolution to derivative products has been slow. Additionally, the largest LPs have lost market share and have been unable to scale thus far.

The bull market that began in March 2020 after the pandemic and the capital crunch that followed the vaping crisis in 2019 appears to be intact for the American cannabis operators, which continue to trade sharply higher than where they traded in the summer of 2020 despite large declines from the peak in February. Looking forward, the outlook appears strong, with the leading companies moving to positive operating cash flow and having increasing access to non-dilutive capital, including debt, mortgages and sale-leasebacks. Several states will be moving from medical-only to adult-use, including New Jersey, New Mexico, Vermont and Connecticut in 2022, New York in 2023 and Virginia in 2024. Several other states could move to legalize for adult-use as well, including Delaware, Florida, Maryland, Minnesota, New Hampshire, Pennsylvania and Rhode Island. Several states are expanding programs as well, with additional dispensaries ahead for Illinois. Medical-only state Minnesota will be adding flower and edibles in 2022, and Ohio is expanding its program as well.​ Increasing competition within certain state markets that is weighing on profitability will likely remain a challenge. Further, while many see federal legalization as a positive, this remains a potential risk-factor in my view.

While the stocks of American cannabis companies continue to be held by mainly retail investors, 2021 saw an increase in institutional investment. Another big development has been the growth in AdvisorShares Pure US Cannabis ETF (MSOS), which has broadened the access to cannabis companies for investors that don’t trade OTC stocks. Additionally, a number of ancillary companies have gone public and trade on higher exchanges, offering institutional investors a way to invest in the industry. We have seen several investments into American cannabis companies, mainly by Canadian LPs, but, looking ahead, strategic investment through creative financial structures will likely extend to CPG companies in 2022.

At the federal level, the FDA (or Congress) could provide clarity on CBD regulation. With respect to THC, both Democrats (Cannabis Administration and Opportunity Act​) and Republicans (States Reform Act​) are advancing legislation to legalize cannabis. While this is going to be a long process in my view due to the complexity (varying state regulations, role of FDA, social equity, taxation), this is very different from what the developing cannabis sector faced just a few years ago: potential crackdowns against state legalization. I remain hopeful that Congress can advance small reforms, including expanded research and SAFE Banking. An enhanced financial reform that explicitly permitted companies operating in state-legal cannabis to trade on higher exchanges would be extremely positive.

Beyond America, cannabis legalization continues to proliferate. While Canada remains the largest federally legal cannabis market, many other countries have medical programs, including Argentina, Chile, Colombia, Ecuador, Peru and Uruguay (fully legal) in South America. Mexico has legalized for possession but doesn’t yet have a regulated program, and it could legalize for adult-use as well. Australia’s medical program was slow to start but has gained traction. New Zealand has a medical program as well. In Africa, several countries have legalized medical cannabis. Europe, of course, has seen widespread adoption of medical cannabis. Germany has been slow to develop but could move to legalize for adult-use. Other markets where there is medical cannabis include Denmark, Greece, Italy, Netherlands, Poland, and Portugal. The UK and Israel have medical cannabis, and Israel could move to legalize for adult-use. Of course, let’s not forget Jamaica!