Why Pelorus Plans to Stay Private as It Continues to Fund the... - Read of Green 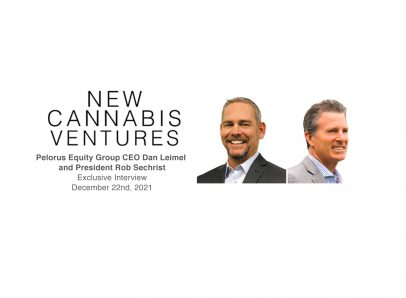 Pelorus Equity Group is a private mortgage REIT serving the cannabis industry, and the company intends to remain private. Eschewing the public markets allows Pelorus to move quickly and avoid the pressures of market volatility, according to President Rob Sechrist. Sechrist and CEO Dan Leimel connected with New Cannabis Ventures to discuss Pelorus’ investments, the company’s approach to opportunities and its pipeline. The audio of the entire conversation is available at the end of this written summary.

Leimel and Sechrist are both entrepreneurs, launching many different businesses over the course of their careers. The pair have known one another since they were teenagers, eventually rooming together in college and then becoming business partners. Leimel has done more than 5,000 transactions over the years. Sechrist’s specialty is in raising capital and working with investors.

Currently, Pelorus has 31 transactions in its portfolio. The REIT has $242 million of assets under management. The company has $165 million deployed and another $100 million going out in the next 30 days, according to Sechrist.

Pelorus has made investments in companies like Acreage Holdings, as well as smaller, single-state operators. Pelorus has also committed $77.3 million in real estate debt financing in relation to the Harborside, Loudpack and Urbn Leaf deal.

Sechrist and Leimel like the West Coast. They are from California, making them very familiar with the state’s municipalities and players. But, Pelorus is largely non-biased when it comes to considering opportunities based on type and geography. The company has funded the construction and build-out of indoor cultivation facilities, lab facilities and dispensaries.

Pelorus has a robust originations team with offices in California and New York. It is interested in the entire U.S. market. The company is currently in eight states with another five coming online, and it is looking at other markets as well.

The Pelorus team takes a careful approach to vetting all potential investments, scrutinizing operators’ team, footprint, financial capabilities and ability to sustain growth. Scholtz has played a key role in helping with origination and asset management.

Pelorus has two lending programs. One is a short-term construction build-out program, typically 18 to 36 months. The other program is a stabilized lending program with three- to five-year amortizing loans.

The regulatory environment is a major consideration for cannabis operators and lenders. While SAFE Banking and federal legalization remain hot topics in the cannabis industry, Sechrist doesn’t believe either will have significant impacts on the industry in the short term. Of the 2,000 transactions the originations team has ever reviewed, none have been lacking banking. SAFE Banking would make it easier to make credit card payments in the cannabis business. Federal legalization would obviously be a positive change for the industry, but Sechrist does not anticipate the regulatory shift happening in the near future.

The company’s pipeline is currently at half a billion dollars with approximately $100 million set to go out in January. Pelorus projects another $250 million will go out by the end of Q1 and another $500 to $750 million by Q3 or Q4. Pelorus is on track to hit $1 billion by sometime in 2023, according to Leimel.

Raising capital for this asset class is challenging, according to Sechrist. Initially, Pelorus raised the bulk of its capital through retail investors. As it has gone through more audited financials, it has added more institutional-level investments. Pelorus has institutional investors, including banks and fund asset managers, participating in its bonds, which has allowed a wider base of investors that can’t invest directly into the industry.

Most of the other mortgage REITs in the cannabis space are public or are going public, according to Sechrist. Pelorus has plenty of access to equity and the ability to raise debt through the bond market. The company has $15 million to $20 million inflows each month. Going public is not the path for Pelorus.

Success within the Portfolio

Success for the REIT has to do with the strength of its book, according to Leimel. Pelorus has no defaults; its borrowers pay each month. The company has also attracted clients that come from other lenders wanting to refinance their loans. Pelorus manages multiple draws on its construction loans and expedites that process to help borrowers to become operational and revenue-positive as quickly as possible.

Sechrist pointed to the vape crisis as a critical challenge in the cannabis industry. Operators across the entire country were impacted, and that period was a significant stress test. But, all of Pelorus’ borrowers were able to make their payments, highlighting the strength of the team’s underwriting ability, according to Sechrist.

While brand and consumer data is widely available in the cannabis space, the Pelorus team saw a gap on the real estate side. Eighteen months ago, the REIT launched a data project to identify the size of the cannabis real estate market and manage its portfolio. Based on that data, the team believes there will be a $50 billion asset class once all of the states are built out with only $2.5 to $3 billion lent thus far, according to Sechrist.