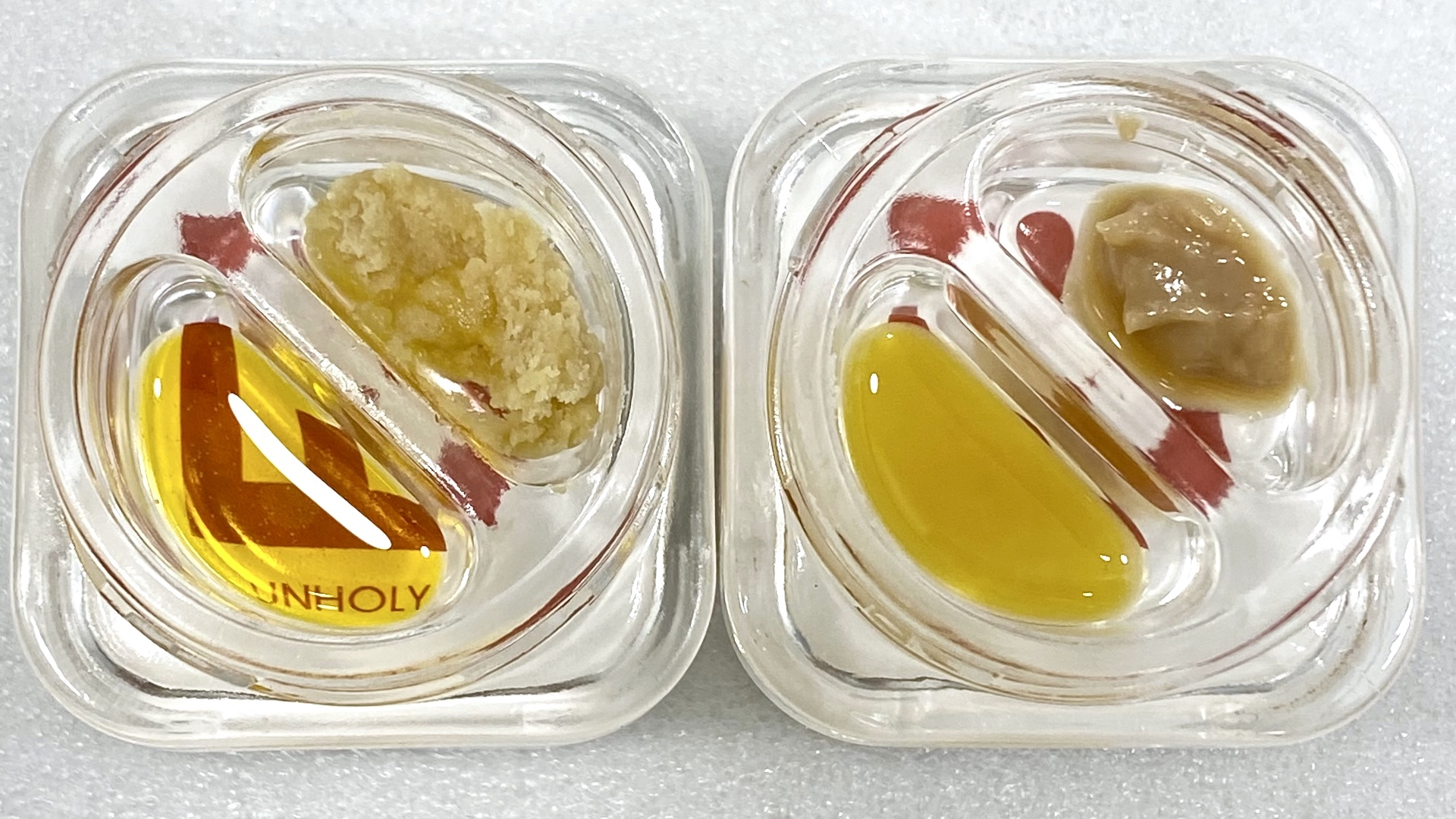 It’s time to fill the freezers with fresh weed this Croptober in hopes of another year of exciting hash.

As farms pack more and more material into freezers this harvest season, we’re looking at a lineup of proper killers that are synonymous with using the best material possible to get the best results. So while there are many flavors yet to come, here are a few we’re sure you’ll enjoy.

While Sonoma County, CA brand Feeling Frosty has been known for some of the most exciting collabs in the rosin game in recent years—with names like Str8organics and Powerzzzup coming to mind—they’re moving outside of the cannabis space to team up with perennial dance jammers Sound Tribe Sector 9.

The move will catapult STS9 up the jam band hash rankings without a doubt and we’re thrilled for them, but they might have a little competition that we’ll get to in a bit.

Unlike much of the list, we haven’t seen this one yet. We just have complete faith in Feeling Frosty and had to share the news with you.

What do you get when you mix the Grateful Dead’s iconic intertwined history with cannabis and a multiple-time hash world champion? The soon-to-be-released Garcia Hand Picked x Surprize Surprize collab dropping later this month. While there have been a lot of cool Dead products hitting the market in recent years, this is the first exotic hash offering. Me and my Igloo x Grateful Dead collab backpack have been waiting for this moment for months.

What are cannabis concentrates, oils, and extracts?

Cartridge/pod of the month

The Zeuz is loose and in recent months has become one of the most coveted vape pods you can get your hands on from coast to coast for full clouting. But unfortunately for those crazy kids east of the Sierra Nevada, you can only get them in California. Essentially, the Zeuz pod combines the award-winning terps of The Original Z with C-Cell’s best tech. Proprietary pod systems are more viable than ever in 2021 as the best concentrate manufacturers continue to lockdown their chunks of the market. The Zeuz pod is no exception to that. Keep an eye out for the solventless version in the not-too-distant future! We tried one of the R&D versions two weeks ago and it was certainly a ripper.

The team at 710 Labs consider themselves to be Zkittlez fanatics, and you can see from the quality of their recent lineup of Rainbow Belts products why they’re so happy they got the cut. The now-famous strain from Archive Seed Bank has been known for some famous hash runs over the last few years, and pairs Zkittlez with MoonBow (the Zkittlez x Dosidos cross). While 710 Labs is understandably excited about their new Percy Rosin Pods, we think the whole lineup looks pretty great. Just look at how absolutely gorgeous that rosin and water hash look. Get your hands on it while it lasts.

While most of the list will focus on the West Coast heat of the moment, there are still plenty of options for solid dabs in the Rockies. Among Colorado’s most respected extractors are the team over at Green Dot Labs. For this list, we’re going with their Sour Animal Live Rosin. The Sour Animal is the offspring of Sour Diesel and Animal Cookies BX2. Expect a flavor and nose reminiscent of animal crackers with a bit of a fuel aroma on the back end.

Back in the day when shatter still ruled and there was the transitional phase to wet terps, HolyWater was one of the most cutting-edge companies around. And now after a few years jumping through the hoops to go legal, they’re ready to start pushing the envelope all over again. The first batches of E85 (Wedding Cake x Grandiflora Project 4516) we’ve seen come out of their Oakland lab have been top class. Solventless and hydrocarbon pairings are a great way to understand the flavor differences between different styles of hash. The deconstructed diamonds and sauce are also cool and don’t feel gimmicky. You just pick out a fat diamond and dip it in the sauce yourself.

The Emerald Cup winners are still less than a year removed from their launch, but they’re starting to pick up steam. While not on a ton of shelves yet, if you can get your hands on one you’ll be able to go for a true adventure in terps. I thought blends were a gimmick a few years ago, then you saw them win The Emerald Cup’s rosin and vape categories in recent years. When you rip a Mistifi pen you’ll understand why I presume blends are now here to stay for sure.

One of the great hash lovers and educators of the modern era was lost recently when the great Frenchy Cannoli passed. Over the years Frenchy shared his love with the thousands who followed him online and those lucky enough to learn directly from him how to make heat-pressed balls of aged ice water hash—Temple Balls. In his honor, we had to put a Temple Ball from Sunset Connect that was made exactly following Frenchy’s lessons. Sunset’s Temple Balls were made just before Frenchy died and have been aging since July. Sunset Connect’s Temple Balls were likely the last commercially produced ones with his tech while he was alive.

Fiore’s pairing of Strawberry Banana and Triangle Kush in collaboration with Karisma is some throwback terps that reminded me of the best Strawberry Banana cured live resins of the Obama Administration. But remember—the sweeter the terps, the more delicate they tend to be. Keep them in the fridge for proper storage or buy a bunch and toss a couple in the freezer for long-term hype preservation.

Except for maybe the new ‘Blueprint’ flower brand, it’s hard to point to a cannabis company that had a faster trajectory to the top in 2021 than the absolute rockstar rosin craftsmen at Hash and Flowers. Their rise to the top of the industry was fueled by elite cold cure rosins, a cut of Honey Bananas that tastes like candy, and a big win over a few former Emerald Cup and Cannabis Cup champs at The Transbay Challenge 2. There is a limited drop of the Honey Strawguava currently floating around the rec market. Happy Hunting.

In the previous edition of the Hash Buzz in July we tuned you into Alien Labs savage quality 510-threaded cartridges. Remember as the rule goes with all cannabis extracts, fire in fire out. Alien Labs’ new Rosin Disposables are the perfect example of the rule. As a wave of higher-end folks has recently got into the disposables game, Alien Labs is easily surfing near the top of it with some of the other folks we mentioned on this list.

Why are people so excited about Pressure? Well, let’s just say it’s all about access. Pressure has a direct link to the Terp Hogz which means the company has access to some of the most coveted Z terps in the world. The first batches looked solid from the upstart brand, but the standout for us so far was certainly the Banana Z. Keep it in the freezer so it stays pretty.

Jimi Devine has been involved in cannabis reform since 2005 and has worked in the Berkeley cannabis industry since 2009, when he moved to California from Lynn, Massachusetts. Currently serving as senior staff writer at Cannabis Now Magazine, he’s also written about cannabis products and policy for the San Francisco Chronicle, The Boston Globe, The Hill, The Chronicle of High Education, Marijuana.com, High Times, 7×7 Magazine, and in Ed Rosenthal’s recent book, This Bud’s for You. Jimi has a BA in journalism and media studies from Franklin Pierce University.