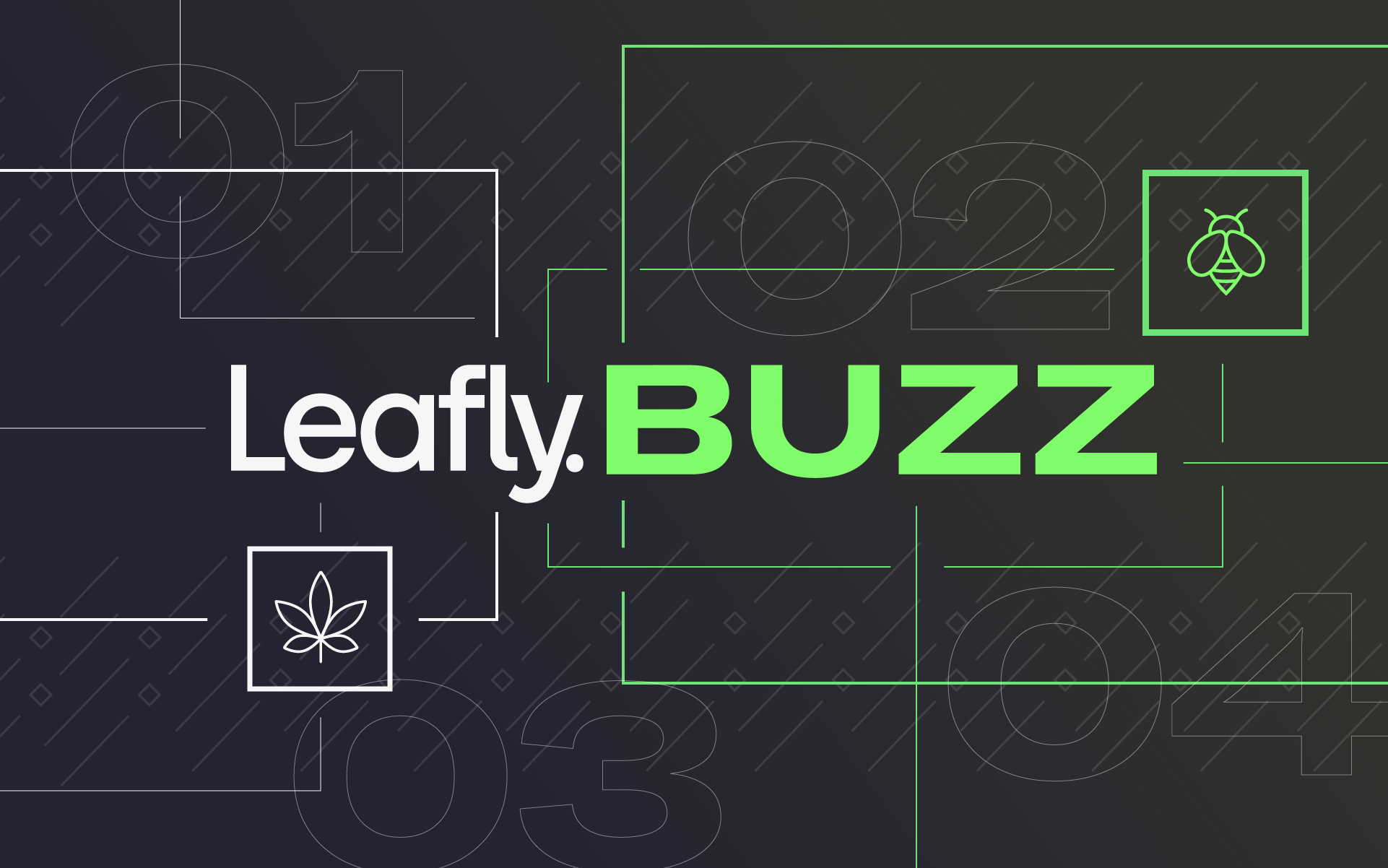 Yeah, not us, either. Too many exquisite buds are in bloom.

Trending strains in the West

Look out for superb, cinnamony, creamy, gassy jars of Horchata, up 11% in search interest in the western US. Growers like SOG (Sea of Green) in Santa Rosa, CA have dialed in this Mochi Gelato x Jet Fuel Gelato, originally bred by Wyeast/Compound Genetics.

Horchata is fun, chatty, and engaging. It goes great with that long-overdue dinner night out with friends. The best jars have a legit, rare, cinnamon top note with a fuel-vanilla and nutmeg spice finish, all coming from diesel and cookies genes. Cinnamon terps’ time has come.

It’s 2022 and the descendants of Sour Diesel and GSC strains rule as weed aristocracy. Just look at this fancy White Truffle, up 21% in interest month over month.

This hybrid from Grand Daddy Purp Genetics’ Ken Estes became a legend for its dank, grape, cookie smell and taste, and laid-back effects good from afternoon ’til evening.

Sorry, sativa lovers—most of the strain release hype occurs on the hybrid and indica side of the spectrum. But if you need something for chores, spreadsheets, and spacing out, we’d go with the number one sativa in the West, Jack Herer; up 11% in recent search interest.

New in the Leafly Strain Database

It’s a play on GMO—one of the dominant cultivars of ‘22. Ripper Seeds crossed GMO Cookies to Kush Mints, yielding a crazy-strong combination of both.

GMO genes dominate in this cross, and we’re OK with that. It tastes astringently sweet, kushy, and minty, with powerful, heady, day-melting effects. We went “OMG” when we smelled the first savory, chemmy hit.

Fresh off the racks of the hotbeds of cannabis culture: hybrid Georgia Apple Pie. Raw Genetics crossed Seed Junky’s Georgia Pie (Gelatti x Kush Mints 11) to Lumpy’s Apple Fritter, and if that all sounds like algebra to you, that’s fine.

Expect perfect-looking buds with frickin’ notes of peach and apple pie—I’m talkin’ tart, sugary, cinnamon scrumptiousness. You’re gonna get french toasted on this strain’s very high-THC hybrid effects. Pack a picnic and a blanket, and text a friend for a weekend park session.

Stay Puft hits about as hard as the Ghostbusters bad guy, with skyscraper-high-THC hybrid effects that go great with watching your favorite YouTubers, or playing some GTA Online.

Fresh in stores this month

Hold the haterade—NFL player Ricky Williams’ Highsman brand, and their “Pregame” flower Jesus Zkittlezworth, has got the right stuff. Expect pretty, shapely nugs and an all-star Zkittlez fruit syrup smell that jumps out of the bag.

It leans toward Tangie, with Zkittlez tropical candy and zesty, high-THC party weed effects. Highsman curates, or “white labels,” bud from Sacramento greenhouse growers Natura this season. But guess what—Ricky can pick ‘em. The Pregame, the Halftime, and the Postgame strains (renamed Zkittlez, PB Breath, and Gelato) all can ball. They’re also priced to move.

One more thing: The bag’s called “Pregame,” but don’t expect to shave seconds off your 40-yard dash. Performance-enhance your bocce ball, croquet, or disc golf game instead.

A Bay Area mantra for 30 years—”Don’t give me no bammer weed,” comes to the legal era with this flower release from RBL Posse member Black C’s Ruthless By Law Red Velvet, through equity brand Sunset Connect.

The bag carries a “No Bammer” guarantee, and Leafly can co-sign. The Baldwin Brothers of Oakland grew this high-THC hybrid of Lemon Cherry Gelato x Pina Acai indoors.

The crazy thing: Our bag had a super unique, cinnamon, red hot front note, with a mild diesel back. The smell carries through to the cinnamon spicy-sweet taste. Testing at 28% THC, we got strong, uplifting, hybrid effects. Great for the studio, the meetup, and the club.

In a world gone mad, it’s therapeutic to get lost in a giggle fit and have no clue what started it. Enter, Terdz. The second best part of a mylar bag covered in cartoon poop is that it doesn’t take itself too seriously, so you don’t have to either. The first best part is the weed, no joke.

Clout King reportedly selected this cross of Jet Fuel Gelato and Runtz, and the farm His and Her Grow cultivated it to perfection in Oregon. Sharing a joint gave us a pronounced effect that encouraged conversation and seemed to slow time. With big Sherbert notes and an earthy profile, this flower does a satisfying job balancing a fruit-forward bouquet with nose-wrinkling funk.

Ballin’ on a budget

Look out for bargains on Papaya Punch by the bunch across the western US. This indica hybrid cross of Papaya and Purple Punch gives functional, versatile, uplifting, munchie-inducing effects that make it great as a dinner party digestif for novices, or an appetizer for the high toleranced.

Quality Papaya Punch smells and tastes like it sounds: a fruity mix of apricot, orange, and tropical papaya. Bred by Oni Seeds, Papaya Punch—and all the Punches—have become staple, workhorse strains in the US.

Have your pick up and down the coast in stores like High Tides in Gualala, CA, where we got Brother David’s branded Papaya Punch, straight from Humboldt County’s Mattole Valley Organics, a Sun + Earth Certified farm.

Highest-THC product of the month

Does weed not get you high anymore? Time for a tolerance break. But before you go, traverse the Wormhole—Artisan‘s hyper premium, infused pre-roll.

Artisan specializes in batch-specific thai sticks, joints, and infused joints—all hand-rolled and ferociously potent. And they’re quality, too. Lots of infused joints use a headachey mix of shake and distillate that’ll give you a short, shallow high. By contrast, Greendawg’s Dawg Breath alone has a ferocious bark—all the Chemdog and OGKB stank a connoisseur craves. But together with the Gas Tanker rosin? Nothing prepares you for your first wormhole.

And that’s a wrap. See you back here soon for the May Leafly Highlight, and a new Leafly Buzz.

Got corrections, clarifications, tips, or news? We’re here to serve at buzz@leafly.com.

How did we do this month? Leave a nice comment below.

David Downs directs news and lifestyle coverage as the California Bureau Chief for Leafly.com. He’s written for WIRED, Rolling Stone and Billboard, and is the former cannabis editor of the San Francisco Chronicle, as well as the author of several cannabis books including ‘Marijuana Harvest’ by Ed Rosenthal and David Downs. He co-hosts The Hash podcast. TW: @davidrdowns | IG @daviddowns