The Leafly Strain of the Year 2021 is Dosidos! - Read of Green 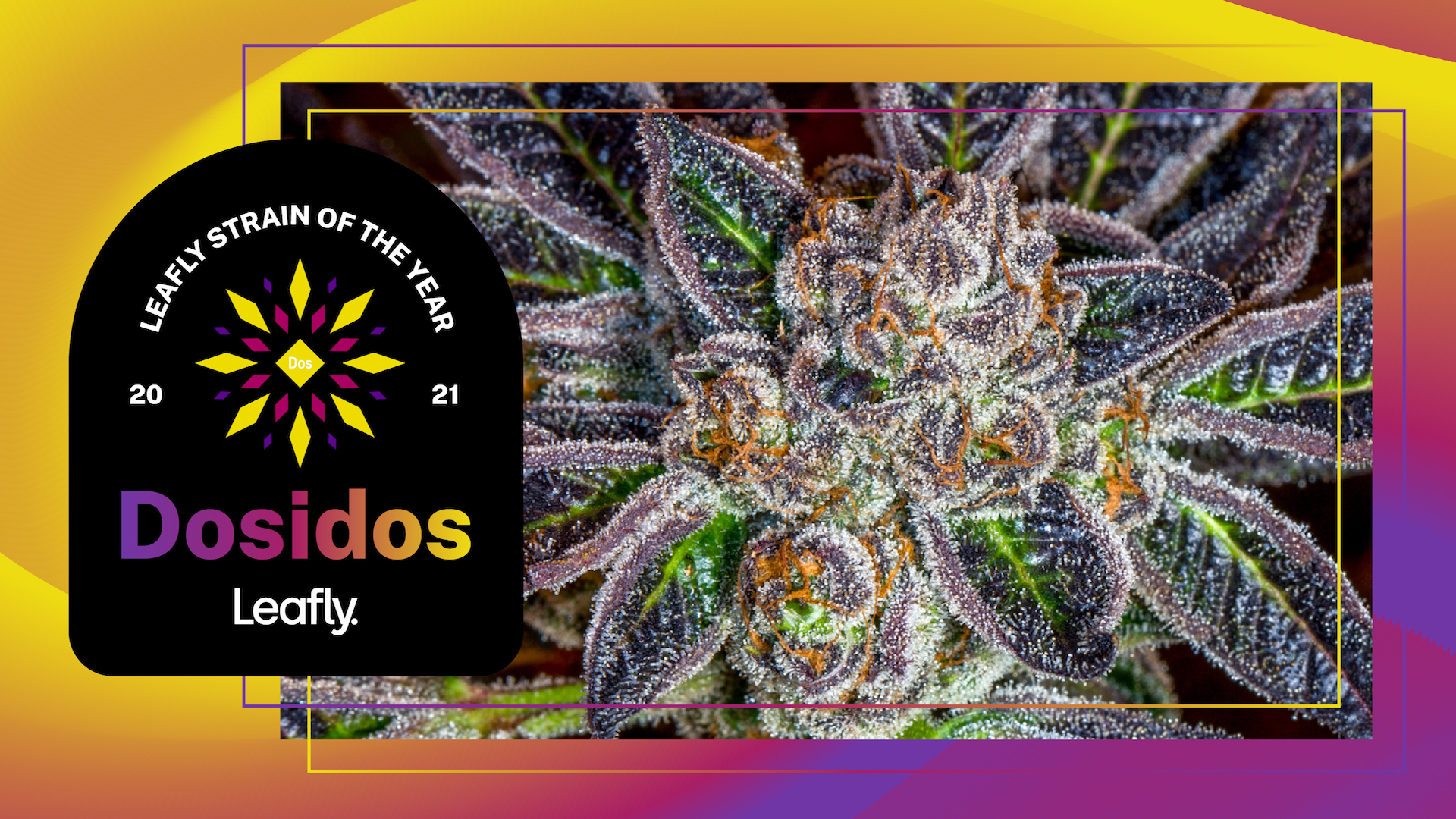 Cannabis lovers, do the happy dance: the Leafly Strain of the Year 2021 is Dosidos!

From coast to coast, in the streets and online, Dosidos showed off this year. This flashy, pungent, maximum-strength indica hybrid cross of OG Kush and GSC earned our highest annual award after an independent review of search trends, menu prevalence, awards, and expert analysis.

Learn more about the varietal’s history and ongoing impact below. And don’t worry, we have varieties similar to Dosi you can shop for, as well as the best runner-up cultivars of 2021.

Why is Dosidos Leafly Strain of the Year?

We gave Dosidos Leafly’s highest honor in 2021 because:

In its short lifetime, Dosi has become a living legend. At the ripe age of nine years old, it waves the banner for modern OG Kushes in 2021. And with exciting offspring like Moonbow and Slurricane ready to carry on its legacy in 2022, Dosi’s stud status is secure. Yes, there are newer, more hyped strains, but we picked Dosidos because it’s clearly not a flash in the pan.

Dosidos’ creator Archive Seeds, in Portland, OR, has cemented their place in the $18.3 billion legal industry because they are respected by breeders, growers, and smokers for the exotic aromas and unique highs of their strains. We give a special shoutout to Archive Seeds’ living legend ‘Fletch’ aka TheDocta. He deserves high recognition for excellence in breeding and for creating Dosidos.

Dosi flowers look icy with trichomes, set off by tight, dense, deep purple leaves. Good Dosidos smacks your nose with gas, then caresses it with a hint of velvety sweet, dank grape, and cookie spice, and a funky dankness dubbed the “breath.”

The smell carries over to the taste—the cultivar “stains the palette” with fuel, said Ted Lidie, founder of Alien Labs in California. Limonene, caryophyllene, and linalool comprise its top terpenes. You get a rocket-ride high and then land into a couch-lock with this maximum-THC indica hybrid.

If you’re like us, you’ll never forget the first time you tried Dosi. Maybe you were at the Urban Pharm dispensary in San Francisco in 2017, taking a big, overconfident bongload in the lounge. Afternoon plans had to be rescheduled. The high needed to get walked off for a bit.

“Oh—Dosidos gets you fucking high,” said Lidie, who has a top-shelf tolerance and has been smoking for decades. “I call it ‘stoned.’ You get that medicated, in-the-couch feeling.”

Dosidos descends from a few of the most dominant pot families since the ‘90s, OG Kush and OGKB (OG Kush Breath, a type of GSC), and a little known heirloom breeding parent, The Mani. One of the world’s foremost and respected breeders, Archive Seeds’ Fletch, bred and selected it in 2012. Its specific parents are Face Off OG BX1 and OGKB.

Not only does Face Off have the gas, but it has strong genes that pass that fuel smell to its kin.

“It’s one of my favorite genetics of all time,” Lidie said.

OGKB stands for “OG Kush Breath,” and an actual Bay Area grower went by that name. OGKB the grower had a very special “mutant cookies” version of the GSC strain.

He gave the flower OGKB to another influential grower named NorCal IC Mag for breeding and safekeeping. Its “Breath” aroma—sometimes funky, savory, or bitter—attracts heavy smokers who get bored by sweet, dessert strains.

Archive’s Fletch bred Face Off OG BX1 to OGKB and selected the most promising phenotypes, or versions of the strain, to become the hit line. According to fellow breeders, Fletch’s unmatched talent lies in sourcing the best parent stock and selecting the most promising progeny from large populations.

Alien Labs’ Lidie said Fletch is known as “The Librarian” for his legendary genetic archives. “I’ve always seen the most unique shit from him,” he said.

“My goal is to preserve the historical, counterculture quality of the cannabis revolution,” Fletch told us in a 2018 video. “I strive to make a mark and really preserve genetics for the community.”

“Combine [those parents] with a catchy name, plus the strong breeding work from Archive Seed Bank, and you have the recipe for a staple strain. Archive has proven they are masters of this recipe time after time.”

Parabellum Genetics founder KC breeds 7th and 8th-generation Dosi crosses. He said, “I respect Fletch the most. If anyone puts in the work in this country, it’s Archive. They’re not beating their chest saying they’re the best. What they are doing is massive pheno-hunts, looking for terps.”

How is Dosidos impacting weed culture?

Dosidos cannonballed into the gene pool and continues to make waves today. When it debuted, its look, terps, flavor, and high spoke for itself. “It was the hottest shit ever,” said Lidie.

Back then, Lidie took his Dosi cut to a leading company, now called Connected Cannabis Co., and blew their minds. “They were like, ‘This is crazy. You guys got to grow a lot of this.’ And we started pumping that out,” he said.

Archive originally sold Dosi seeds directly and through seed banks, allowing any grower to stand on the shoulders of the industry giant. Influential Humboldt County, CA nursery operator Kevin Jodrey said Archive Seeds put a foundational OG x GSC cross in the hands of the masses. Dosi became the chassis that others could then bolt newer flavors onto.

East Coast rapper and weed connoisseur Smoke DZA, aka The Kush God, considers it one of his top 5 weed types of all time. His fondness for the flavor makes sense, with how much he loves Dosi’ ancestor OG Kush.

Compound Genetics’ Lynch explained, “Dosidos was the first strain released that featured the legendary OGKB clone and had a ‘peanut butter’ terpene profile. This instantly created big buzz for Dosidos and helped it gain popularity quickly.”

“Slurricane kind of broke the internet when it came out,” Parabellum Genetics’ KC said.

Today, there’s also a Dosidos x Zkittlez called Moonbow, “which might be the best Zkittlez hybrid ever,” Lidie said. “Again, that’s Fletch selecting really well and going against some of the bad growth traits of Zkittlez.”

Breeders are also using Dosi, as well as OGKB, and GMO to work on some of most pungent smells in cannabis. Heads adore them the same way stinky cheese eaters and triple-IPA drinkers love those rude tastes.

“People like all that nasty stuff,” said Lidie. “I mean, I’ve been bored as hell, too. People want to explore. That’s what Alien Labs is for. For people that don’t want to buy fucking Gelato again.”

How do I get Dosidos?

You can buy direct at the Archive store in Portland, OR. The shop sells some of the world’s best flower, including current seeds of Dosi and some Dosi crosses. Simply amazing.

We just picked up some DosiTree (Dosidos x Lemon Tree) seeds for $100. There’s a Dosidos F2 clone selected by the breeder himself for $30. The feeling? Imagine going to a Tesla showroom, buying AutoCAD files for a Tesla Model 2, and 3D printing one yourself. It’s thrilling to have state-of-art, world-class cannabis genetics right in your garden, as well as the ability to reproduce or just run selected cuttings for connoisseur quality home grown.

“I love that you can buy direct from him and get great pricing. I popped a ton of Dosi hybrids,” said Lidie.

Farms in every legal and medical state grow Dosi and its crosses, and stores in those states carry it.

All across the country, dispensary menus on Leafly list Dosidos or its crosses. The Dosidos-est store in the US? Buddy’s in Renton, WA, which lists 16 varieties for sale, at the time of reporting. Sixteen!

The future of Dosidos

Going into 2022 and 2023, look out for fresh Archive Seeds crosses in the field:

The new Moonbow and Rainbow Belts hybrids deliver gob-smacking flavors and neon daydreams, all from buds so beautiful it feels criminal to break them up.

The Leafly Strain of the Year 2021 and its growing family are “for people that want to explore what cannabis has to offer,” said Lidie.

“There’s hundreds of thousands of different flavors, and combinations, and highs—and it’s just crazy to me,” he reflected. “Guys like Fletch, and me, Exotic Genetics—so many breeders: That’s what we are all here to bring out and let people experience.”

How did we pick Leafly Strain of the Year?

Picking Leafly Strain of the Year takes a mix of science and art.

Leafly uses data plus editorial expertise to narrow down the finalists: from what’s popular in individual stores, to what’s popular in different regions of the country at the same time. We look back on a strain’s performance for a calendar year or more, and analyze its trajectory in comparison to other flower trends.

Our independent review excludes any input or influence from outside parties or the Leafly sales team. We contacted zero live sources for this article until after we chose the 2021 Leafly Strain of the Year.

Calvin Stovall is Leafly’s East Coast Editor. He’s an Atlanta-based writer, producer, and journalist whose work has appeared in Complex, HBO, XXL Magazine, and other publications.

David Downs directs news and lifestyle coverage as the California Bureau Chief for Leafly. He is the former cannabis editor of the San Francisco Chronicle, as well as the author of several cannabis books.