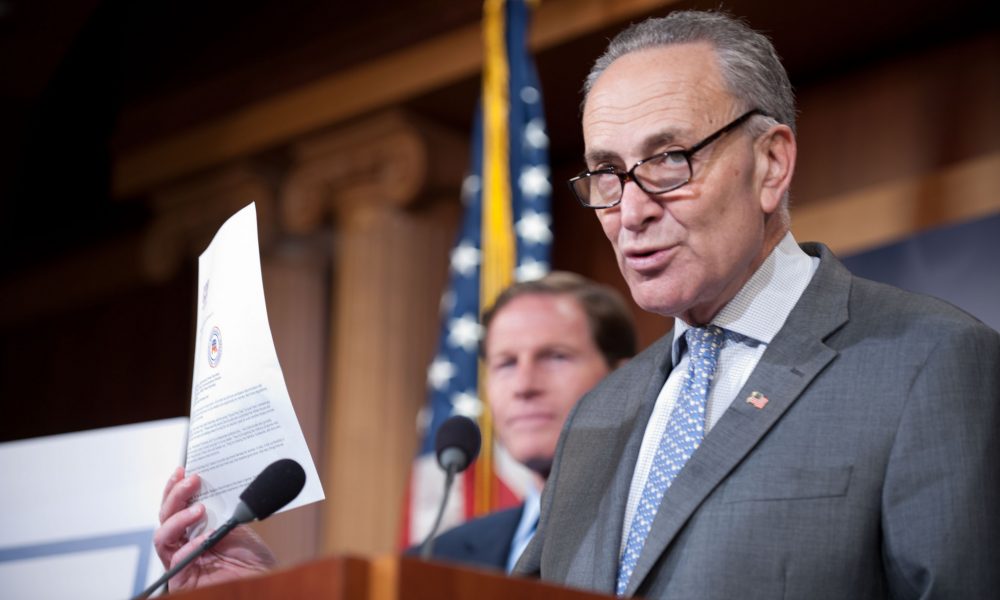 Senate Majority Leader Chuck Schumer (D-NY) says Congress is getting “very close” to introducing and passing a marijuana bill with provisions covering banking access for legal businesses and expungements of past convictions, citing progress he’s made in discussions with a “bunch of Republican senators.”

During a debate with his Republican reelection opponent Joe Pinion on Sunday, Schumer was asked about a separate broader cannabis legalization bill he filed this year and whether he felt it would make more sense to first promote more research into marijuana before ending prohibition.

While the top senator said that research is “very, very important,” he pointed out that “many states have approved legalization of cannabis,” and so the policy is already “upon us.”

“But we are getting very close,” Schumer said in the debate, which was hosted by Spectrum News. “I am working in a bipartisan way with Democrats and Republicans to take the SAFE Banking Act, which allows financial institutions to involve themselves in cannabis companies and lend money to them—but it also does some things for justice, such as expunging a record.”

He gave the example of a 15-year-old busted over a “small amount of marijuana” who was ultimately sentenced harshly in a manner that would be consistent with possessing and selling heroin and whose “life was ruined.”

What the senator is talking about is the much-anticipated SAFE Plus package, which is expected to build upon a standalone cannabis banking measure that’s passed the House in some form seven times now but which has stalled in the Senate under both Democratic and Republican control.

The plan, according to several lawmakers, is to file the package of modest marijuana reforms some time during the lame duck session following next week’s midterm elections, pass it through both chambers and send it to the president’s desk before the end of the current Congress.

Meanwhile, Pinion, the Republican challenger, was asked for his opinion on ending federal cannabis prohibition at the debate and started by saying that “we need to deal with the fact that we’re not talking about your mom and dad’s dope.”

“We’re talking about THC levels that have been off the charts,” he said. “I think you bring up a good point, the notion that we would release it on the citizenry at the federal level before we’ve actually done the due diligence seems reckless and irresponsible. Just my thoughts.”

He then made a pivot to the opioid overdose crisis, suggesting that there’s a prevalence of fentanyl-laced cannabis and saying “we now have people that are trying to smoke marijuana and are going to drop dead.”

“There are unintended consequences. It is a thread that runneth between all of this, from the border crisis to even this conversation about marijuana, because Chuck Schumer has not taken the business of securing our border and people are dying,” Pinion said. “And so I think, in the event that we’re going to go down this path at the federal level, we should do so in a manner that recognizes that these decisions have dire consequences and that people are actually dying, in some cases, because of them.”

The SAFE Plus bill that Schumer is working to finalize with bipartisan and bicameral input is not expected to include language that would federally legalize marijuana, however.

Last month, the House sponsor of a marijuana banking bill said that he recently spoke with the majority leader at an event at the White House and discussed the need to enact the bipartisan reform this session.

Rep. Ed Perlmutter (D-CO) said that he impressed upon the leader the importance of his SAFE Banking Act and Schumer assured him that the chamber is “working on it” and is “going to get going” on the reform.

Lawmakers have signaled that the SAFE Plus legislation will contain protections for banks that work with state-legal marijuana businesses, as well as other modest proposals to provide medical cannabis access for military veterans, promote research and more.

One thing that Schumer is not working on is a plan to let Amtrak train passengers buy and use cannabis during their travel, as some people came to believe after a fake news article was published last week. His office confirmed to Marijuana Moment that the story was made up.